In 1946,  Louis Reard (ray-YARD) had designed something that would stir the masses.
“THE BIKINI “

Reard an engineer-and a Frenchman, of course! -fashioned a two-piece women’s swimsuit from 30 inches of fabric. But he needed a name for it, something exotic, bold, and eye opening. Four days before he was to show the world his new bikini in Paris, the U.S. Military provided him with a name.

They exploded a nuclear device near several small islands in the Pacific known as the “Bikini Atoll”. On July 5th, 1945, he unveiled the bikini. lthough he would later claim he named the bikini after the islands and not the atomic blast, he was clearly taking advantage of a “hot topic”. 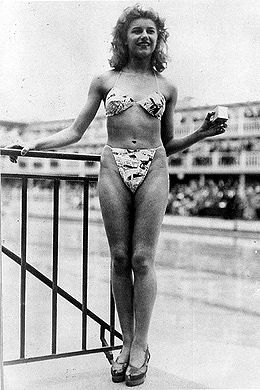 Reard’s rival in bikini design, Jacques Helm, was actually the first to create the iconic two-piece swimsuit of the 20th century. Helm called his design the “atome” in a nod to the smallest particle in the world known at the time.

A Marketing Genius, Reard introduced his skimpy two-piece design five days after the United States began atomic tests in the Bikini Atoll and named it “bikini” to suggest that it would have the same explosive impact on society as an A-bomb. And so the  name “Bikini” was born for the smallest bathing suit for a female.

Reard’s “bikini” was so small, in fact, that no Parisian models at the time would wear it on the runway. He hired Micheline Bernardini, who had no qualms about strolling around in a bikini, seeing as her day job was a nude dancer at the Casino de Paris. Bernardini was not what you’d a classic beauty, but after photos of her in a reclining pose hit the press, she was swamped with fan mail, close to 50,000 letters.

Two piece suits weren’t new. As part of wartime rationing, the U.S. Government, in 1943, ordered a 10 percent reduction in the fabric used in woman’s swimwear. Off went the skirt panel, and out came the bare midriff. At beaches across the country, men paid special attention to women doing their patriotic duty. But Reard pushed the envelope. He shrunk his suit down to 30 inches of fabric – basically a bra top and two inverted triangles of cloth connected by string – and put the navel on center stage.

The world took notice. In Catholic countries – Spain, Portugal, and Italy – The bikini was banned.
Decency leagues pressured Hollywood to keep it out of the movies. One writer said it’s a “two piece bathing which reveals everything about a girl except for her mothers maiden name.

Movie star Esther Williams who probably was seen in a two piece bathing suit by more people than anyone in the world, once said: “A bikini is a thoughtless act”.

1951: Bikinis, perhaps seen as an unfair advantage to the wearer (and as potentially dangerous to the health of some judges) are banned from beauty pageants after the Miss World Contest. The tasteful one-piece reigns supreme.

1963: The bikini meets a challenge in the generous form of Annette Funicello. The ex-mouseketeer’s “Beach Party,” with singer Frankie Avalon, leads to six sequels, including the memorably titled “How to Stuff a Wild Bikini” (in 1966). No special effects were used.

1964: The bi- (“two”) kini becomes the mono- (“one”) kini, in the eyes of designer Rudi Gernreich. The Vatican denounces the topless garb. An unrepentant Gernreich sells more than 3,000 suits in less than a season in Europe. More Americans go abroad.

1966: The bikini grows fur in “One Million Years B.C.,” which catapults comely cavegirl Raquel Welch to stardom despite mixed reviews of the saggy screen saga.

1983: Carrie Fisher, as Princess Leia, wears an ornate version of the bikini (studded collar optional) in “Return of the Jedi.” Even Yoda notices. The film is the most successful of the George Lucas trilogy.

1993: Score one for the “sports bikini.” The hugging halter-top design becomes the rage, thanks to Volleyball queen Gabrielle Reece and MTV.

The Bikini is a women’s two-piece swimsuit that covers the breast and groin areas. It was considered risqu when it first appeared in 1946, but the two-piece design was actually a throwback to very ancient times. Wikipedia cites the earliest form of a bikini appearing in the Chalcolithic Era (3500 BCE to 1700BCE). Bikinis appear in ancient Roman mosaics and murals, suggesting they were popular as swimming costumes among Roman women.

Bikinis were accepted as mainstream swimwear fashion on the French Riviera long before being embraced by the public in the United States. The bikini was introduced to the U.S. in 1947, but its scandalous status remained in force well into the 1950s,

Many American cities even passed laws to prohibit the wearing of a bikini in public. In 1957, Modern Girl magazine stated “It is hardly necessary to waste words over the so-called bikini since it is inconceivable that any girl with tact and decency would ever wear such a thing.” American women didn’t really jump on the bikini bandwagon until the late 1960s with the start of the so-called Sexual Revolution. Since that time, the bikini and its stylish variations have become the most popular swimsuit style in the U.S.

Because there are so many variations in bikini design, it helps to be familiar with the available styles before going shopping. Be aware, too, that your body shape and your level of self-confidence will also have an impact on the style you ultimately select.

In 1964 the two-piece became a fixture on dormitory walls around the country with Babette March’s appearance on SI’s first Swimsuit Cover photograph by J. Frederick Smith.    (Seen Below) 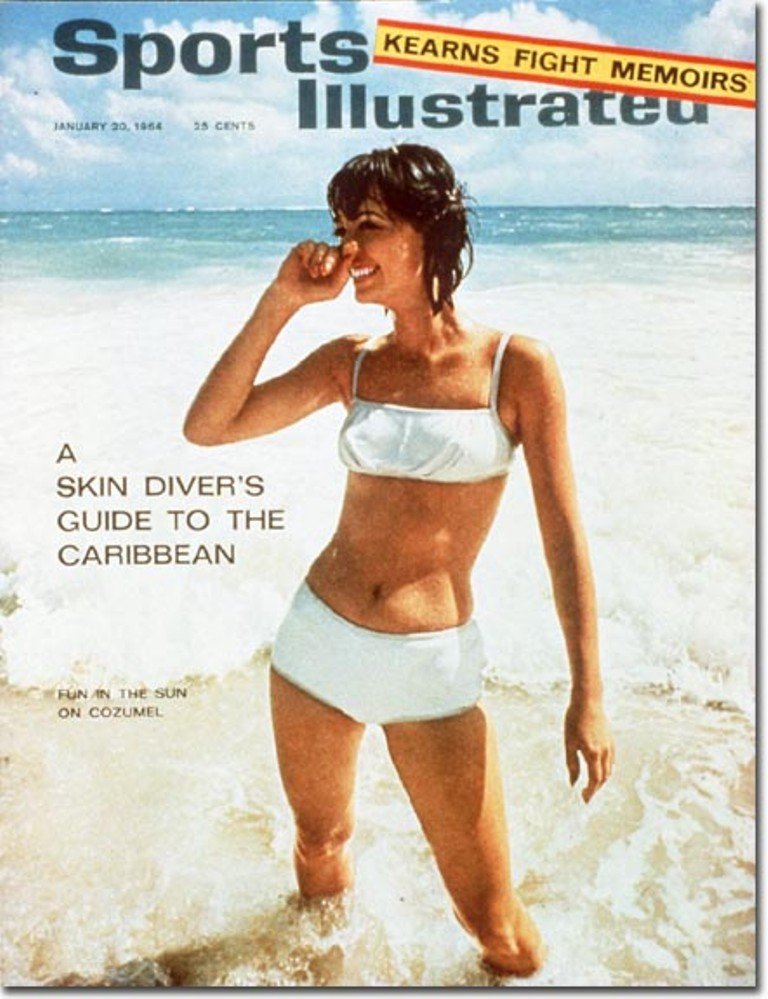 The Bikini glossary provides basic descriptions of the many types of bikinis currently on the market.

Tankini- A tank-style top and a traditional, string, or thong bottom.

Bandini– A strapless tube or bandeau top combined with a regular bikini bottom.

Camikini- A camisole top that will support larger breasts combined with any type of bikini bottom.

Thong– A bikini top with a bottom that covers the groin with a small piece of fabric connected by strings on the sides and between the buttocks.

Halter bikini- A top with a strap that circles the neck and attaches to the bodice combined with a traditional bikini bottom.

Micro bikini- A string bikini top with tiny triangles that cover the nipples and little more, with a g-string bottom.

Monokini- A skimpy bikini connected with a strip of fabric that runs from top to bottom or a bikini bottom worn without a top.

Sports Bikini- Worn by women who love sports, it features a top that is as supportive as a bra and a traditional bikini bottom.

Seekini- Any type of bikini that is “see-through” and usually can be worn only on certain beaches.