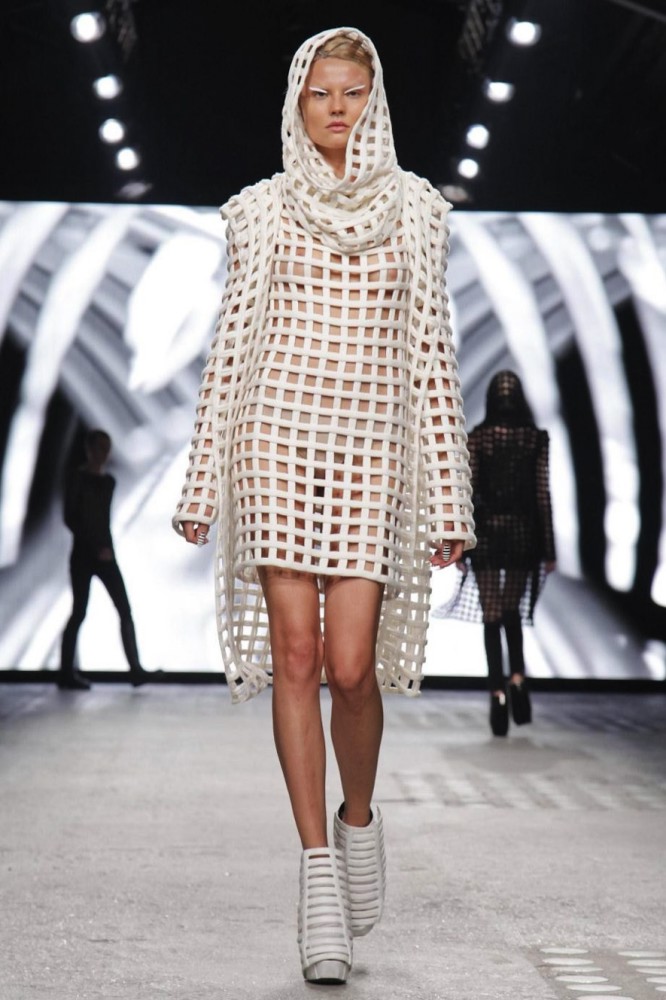 Gareth Pugh is Britain’s fashion designer who has received global recognition for both his outlandish clubwear and his novel approach to redefining modern luxury.

Born in Sunderland in August 31, 1981, at 14, Pugh began working as a costume designer for the English National Youth Theatre. He studied on the Art Foundation course at City of Sunderland College in June 2000 and completed his degree in Fashion Design at Central St Martins in 2003.&nbsp;

His final collection at St. Martins, which used balloons to accentuate models’ joints and limbs (a technique that would become one of his trademarks), attracted the attention of the senior fashion editor of Dazed & Confused magazine, who placed one of his designs on the magazine’s cover shortly thereafter.&nbsp; 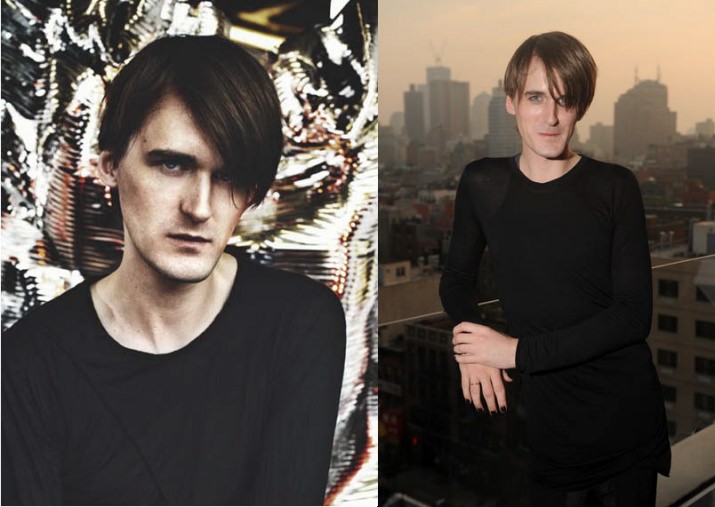 During a work placement assisting Rick Owens at luxury furrier Revillon, Pugh met Michelle Lamy, the Parisian fashion consultant largely responsible for the commercial ascent of the Owens label. &nbsp;Pugh was selected to participate in British reality show The Fashion House two months after his graduation, which he would later call &quot;horrible&quot; and his &quot;only other option [to being on] the dole.&quot;&nbsp; 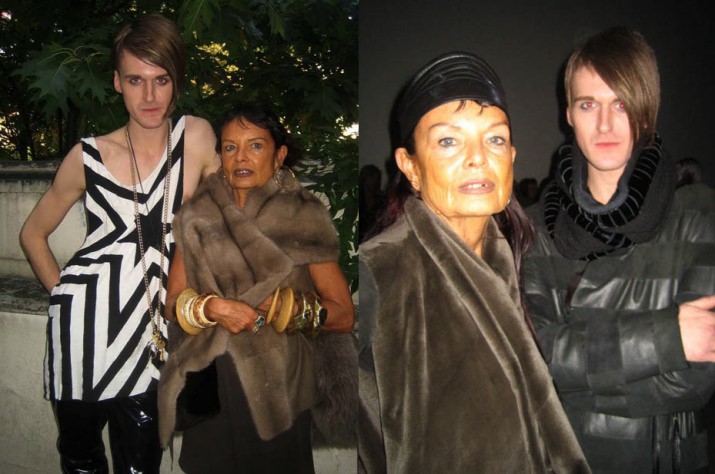 The rise of !WOWOW!, a feature in Dazed & Confused, and a debut show at London club Kashpoint’s Alternative Fashion Week brought Pugh to the attention of Fashion East &quot;London’s breeding ground for cutting-edge new talent,&quot; leading them to invite Pugh to participate in its Autumn 2005 group show. Pugh had only four weeks, with no studio, no assistants, and little money, to create the collection. His collection ended up a critical success and attracted significant attention to his designs.&nbsp;

In the Autumn of 2006, Lamy became official backer to Pugh, their collaboration marking a more luxurious direction in his work with the introduction of cashmere, leather and mink to collections.&nbsp;Pugh has shown at London Fashion Week as part of Fashion East and was awarded New Generation sponsorship to show in Autumn/Winter 2006. 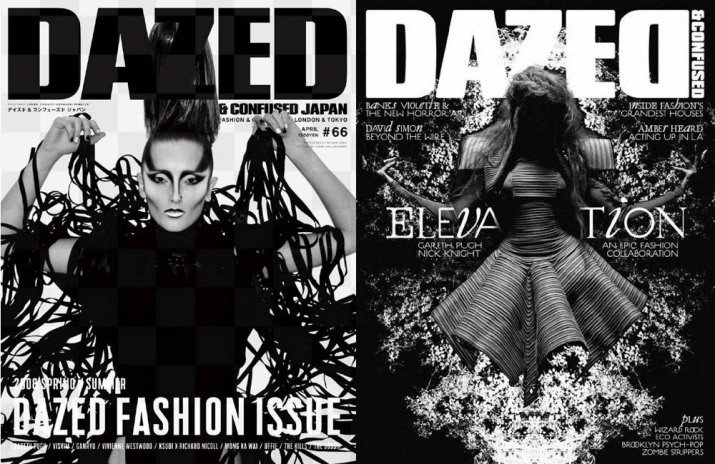 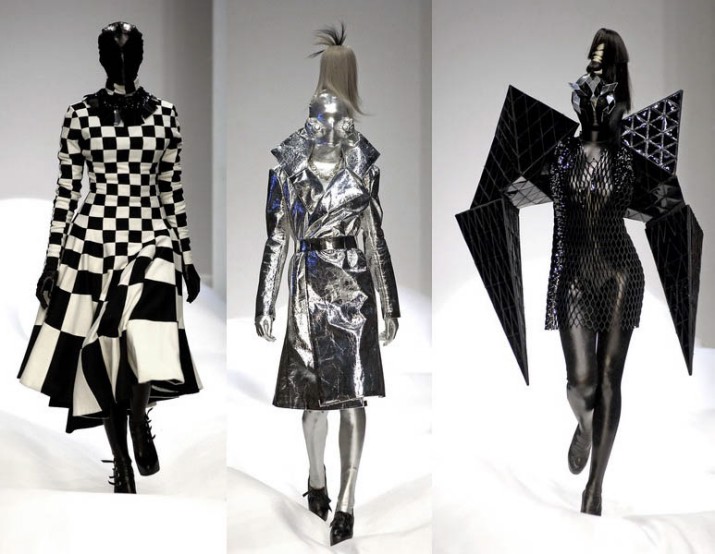 Pugh&rsquo;s designs are stocked in Side by Side in Japan, Seven and Opening Ceremony in New York, and in London by Browns and Dover Street Market.&nbsp;In 2010, Gareth Pugh has opened his first boutique in Hong Kong. In January 2011, Pugh was the guest designer at Italian trade show Pitti, where he presented a special collection via video installation in collaboration with producer Ruth Hogben. 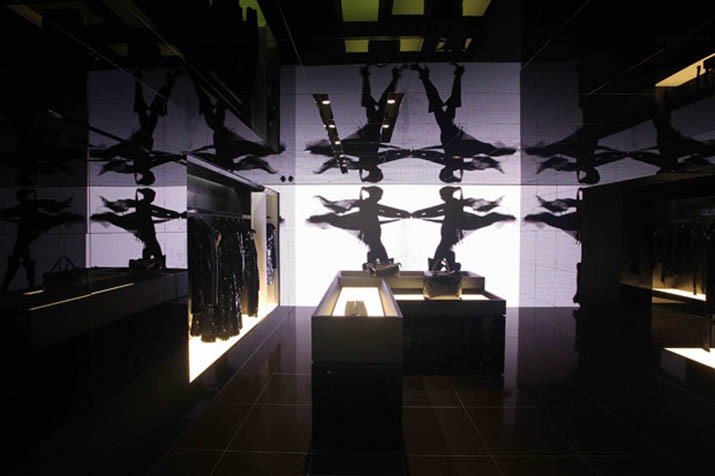 Style.com describes Pugh as the &quot;latest addition to a long tradition of fashion-as-performance-art that stretches back through Alexander McQueen, John Galliano, and Vivienne Westwood to the eighties club culture of Leigh Bowery.&quot; (Pugh, however, dismisses frequent Bowery comparisons as &quot;lazy journalism.&quot;) Klaus Nomi has also been suggested as an influence on Pugh. Pugh’s collections are autobiographical rather than referential, and draw inspiration from Britain’s extreme club scene.&nbsp; 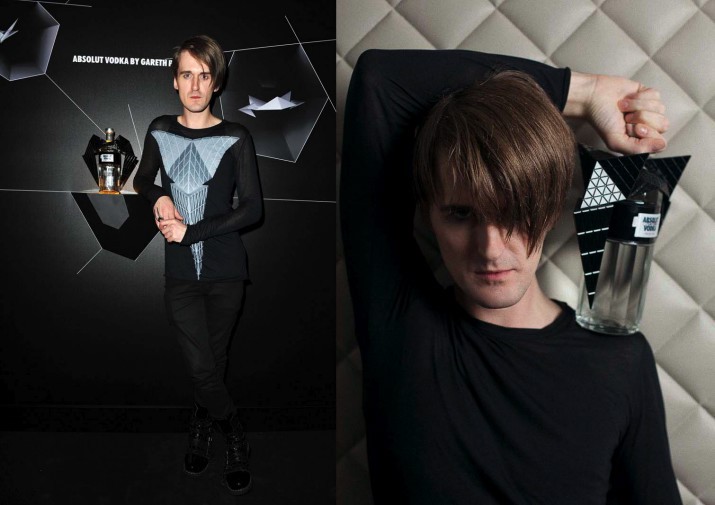 Pugh’s trademark is his experimentation with form and volume. He often uses &quot;nonsensically shaped, wearable sculptures&quot; to &quot;distort the human body almost beyond recognition.&quot; Elements in his designs include PVC inflated into voluminous coats, black and white patchwork squares, Perspex discs linked like chain mail, and shiny latex masks and leggings; he has used materials including mink, parachute silk, foam footballs, afro-weave synthetic hair, and electrically charged plastic in his clothing. Pugh describes his designs as being &quot;about the struggle between lightness and darkness.&quot; 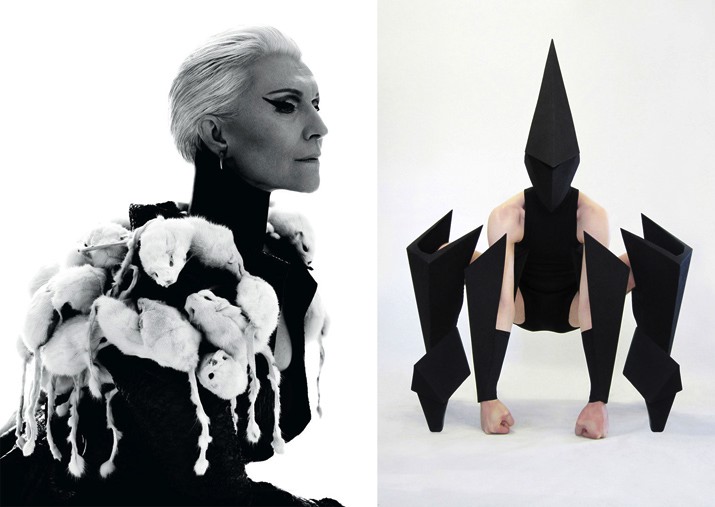 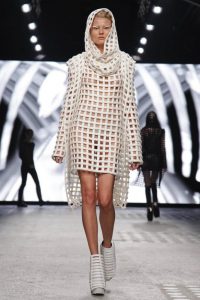