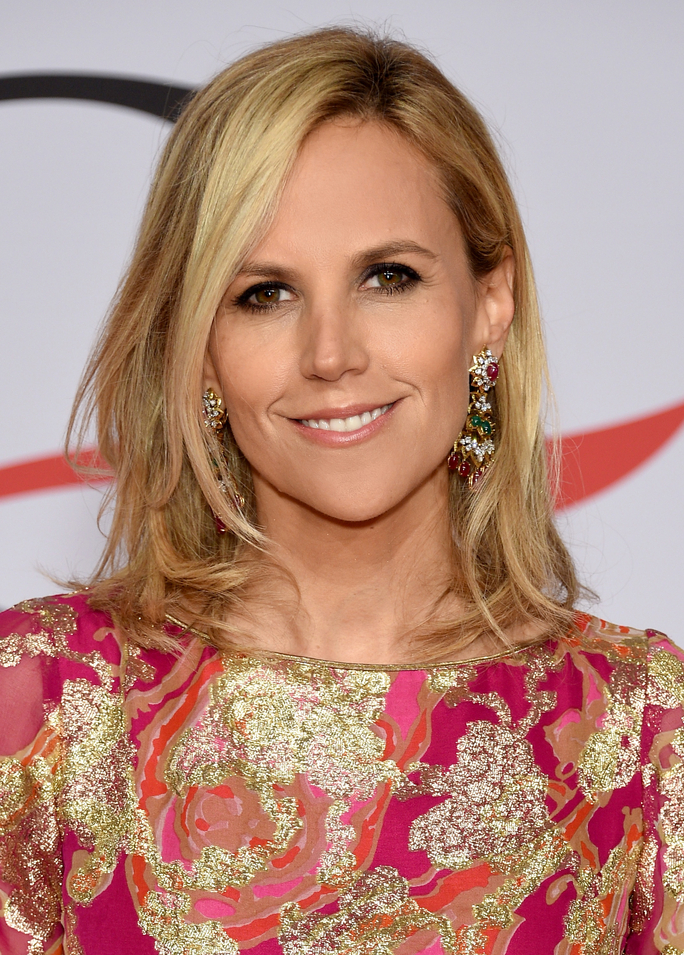 It is almost unheard of for fledgling brands to be up against the likes of Michael Kors and Marc Jacobs for an award and win, but one did. In June 2008, just four years after opening her first shop in the Nolita District of New York City, Tory Burch won Best Accessory Designer of the Year by the Council of Fashion Designers of America (CFDA). Then again, it also almost unheard of to make $100,000 in sales the opening night of a store as Tory Burch did.

Tory Robinson was born in Valley Forge, Pennsylvania, June 17, 1966  the daughter of Reva (née Schapira) and Ira Earl “Bud” Robinson. She was raised with her three brothers (Robert, James and Leonard)  in Valley Forge, Pennsylvania, in a sprawling 250-year-old white, Georgian house surrounded by 30 acres of land. Growing up Burch was a tomboy climbing the trees in the back yard or running around with her older brothers. 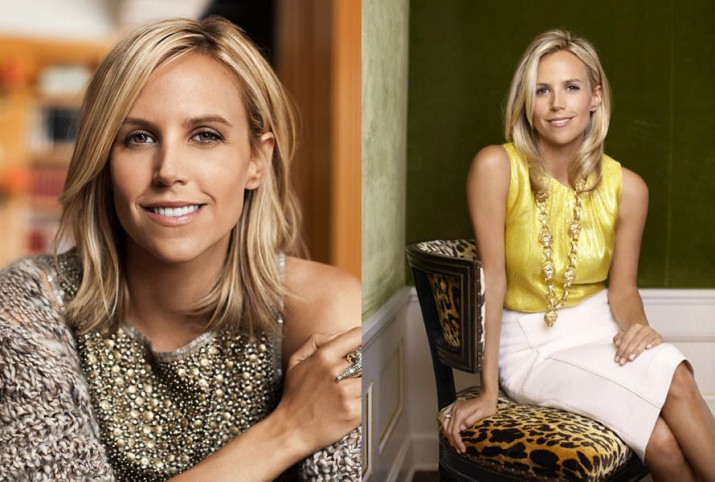 Burch, now known for her feminine casual wear, said that when she was younger, her mother would have to force her to wear a dress. She attended the prestigious Agnes Irwin School where she excelled at sports, enjoyed riding horses and was the captain of the tennis team. At the University of Pennsylvania, she majored in Art History; however, it did not compare to her true love: fashion. Even on campus she dressed very well. Burch told Vanity Fair in 2007 that her friend Patrick at the University described her style as, “Half preppy and half jock—or prock” it eventually came to be known as “Torywear.” Beginning with her first job out of college, all of her jobs have been in the fashion industry.

Tory Burch’s parents gave their children a comfortable, almost extravagant lifestyle on Philadelphia’s Main Line, and their socio-economic status put them in elite social circles. Her parents, Buddy and Reva Robinson, loved to spend their summers in Europe and her mother would stop by Morocco on the way home to buy tunics—a garment that became Tory’s signature. 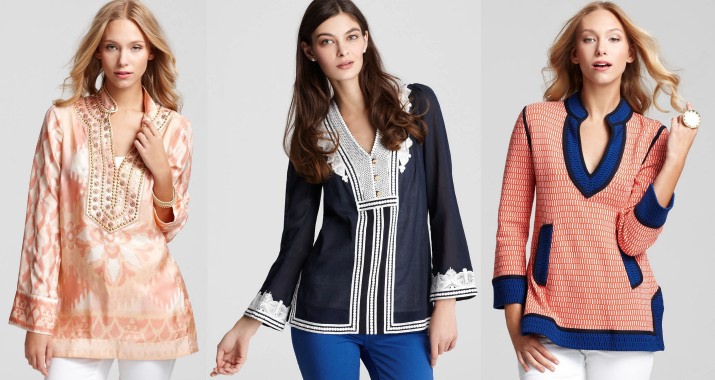 Her mother frequently shopped in New York City for designer clothing and her closet is full of vintage labels such as Valentino and Zoran. In every interview, Burch says that her parents’ eclectic and worldly style influenced her own design style. “I always watch my mother, Reva, get dressed at night, and just look incredibly stylish. And my father had his own innate sense of style. He used to design every piece of his clothing and have incredible details, like lining his dinner jackets with Hermes scarves and piping them and all of his shirts with initials. He was one of my biggest, biggest inspirations,” Burch said in an interview with Women’s Wear Daily. The 1960s and 1970s fashion also served as Burch’s fashion muse, as well as Audrey Hepburn’s film Two for the Road. 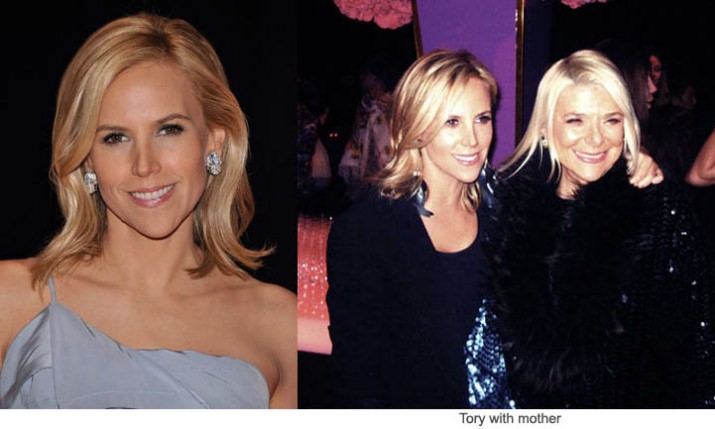 Reva Robinson frequented Zoran so much that Burch’s first job after graduation was working at the Public Relations department there. She then moved on to become a copywriter for Ralph Lauren, which she left in 1995 to work in Public Relations with Vera Wang. Before working at Vera Wang, she was briefly married to William Macklowe, son of New York real-estate mogul Harry Macklowe. 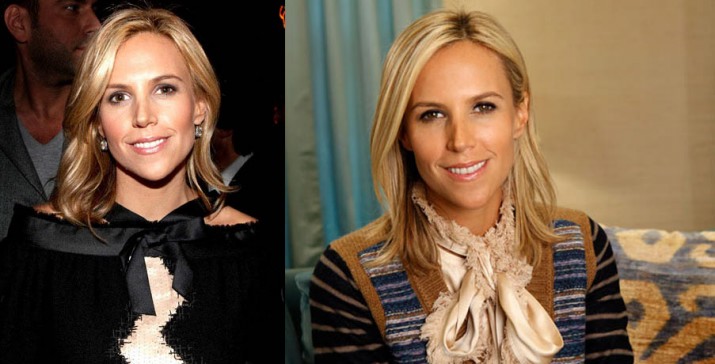 At Vera Wang, she kept on running into Chris Burch, a venture capitalist 14 years her senior. They married in 1996 and during their honeymoon she became pregnant with her twin sons, Henry and Nick. Chris Burch had three older daughters—Pookie, Louisa, and Izzie—from a previous marriage. She later had a third son, Sawyer. In a house full of six children, it became increasingly hard for Tory to work and be a full-time mom. She gave up her career for a period of time, but she says she began to grow “restless.” She started cutting out pages from books, magazines, etc., and created a scrapbook of sorts and later showed prominent fashion designers who were quite impressed with her ideas. 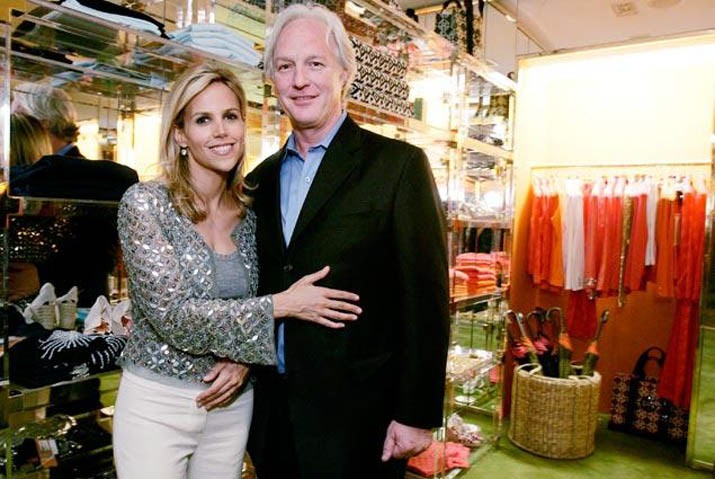 Burch has said in many interviews that after 9/11 an inspirational commercial about “following your dreams” often came on and she finally decided to take the plunge into fashion design—something she had never done before. Her husband, Chris, financed much of her project, contributing $2 million. Before opening in 2004, Burch worked relentlessly for eight months putting the collection together. The night before, her step-daughters and she were up the entire night putting on the final touches. Burch only went home to shower before the store’s opening. Her status at that point had made her a permanent fixture in New York City’s elite social circles and with the friends she made while working at the big fashion labels, her store opening was sprinkled with celebrities, fashion columnists, and the “who’s who” of the fashion world. Burch never expected that on her first day nearly her entire inventory would be sold out. 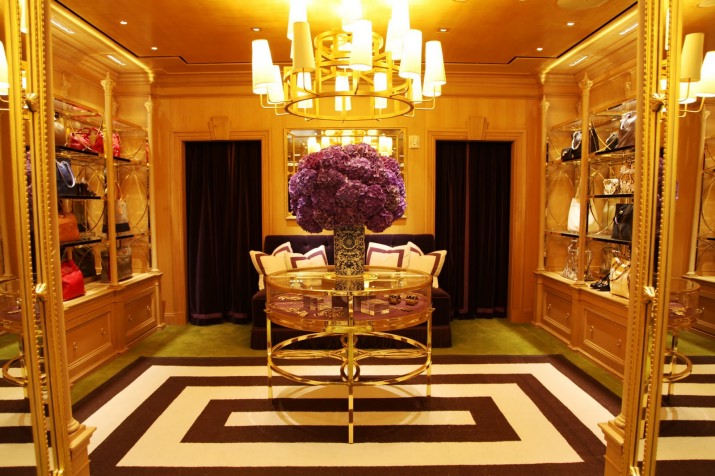 Oprah Winfrey was given a tunic from Tory Burch’s collection as a gift and in March 2005, her producers asked Burch to come on the show. After her appearance on the show in April of that year, her stardom skyrocketed. The very next day her website received eight million hits. She still attributes much of her success to her appearance on the show. Burch believes women gravitate toward her clothing because she found a hole in that market that her designer clothing could fill. “I’ve always been a big fan of designer clothing, but I was tired of spending designer prices. I believed there was a void to be met in the market that was classic American sportswear that was chic and simple and also well priced. I wanted to give women wearable and stylish clothing that fell somewhere between the contemporary and designer markets,” Burch said in a Women’s Wear Daily interview. The price range of most of her clothing is between $195 and $495, a price that most people can either easily afford to buy or afford to splurge on once in a while. 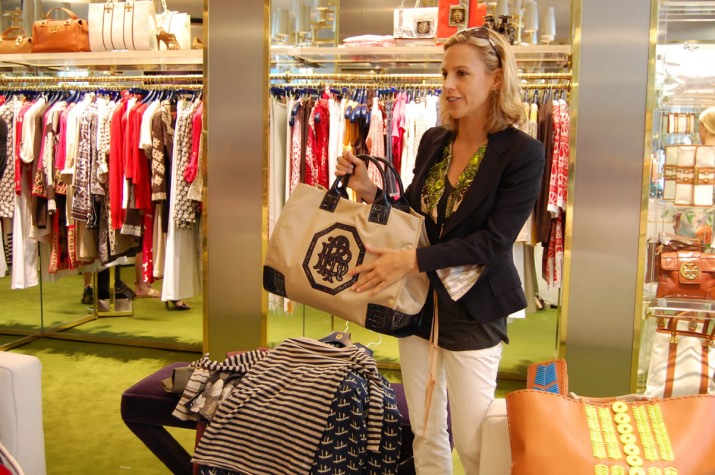 Diane von Furstenberg introduced the world to the working woman’s staple dress: the wrap dress. Coco Chanel converted the manly suits of the early 20th century to body hugging feminine suits. It takes most fashion labels decades to find a signature style, but for Burch it has taken merely a few years.

She has two signature styles; the first is, of course, the tunic. Other designers had tried to makeover the tunic, but Burch was the first successful designer to do so. The tunic is very versatile in that it can be worn during Sunday brunch or at a fancy charity event. Prince even wore one of her studded tunics at the Coachella music festival in April 2008. 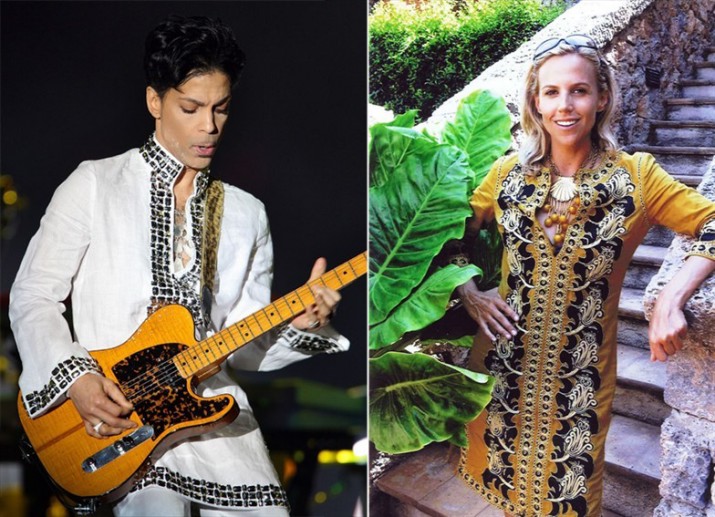 Her other signature piece is the $195 Reva Ballet Flat. The flat comes in a variety of colors with an oversized “double T” emblem—Burch’s logo. The Los Angeles Times reported that by June 2008, 300,000 pairs had been sold. Every season the flat is sold out and people are waitlisted. The flat is so popular that knock-offs can be found everywhere, including Target. She was also revolutionary in adding bursts of color in her clothing. Most designers stick to neutral colors, but not Burch. She has bright orange tunics and fuchsia dresses. 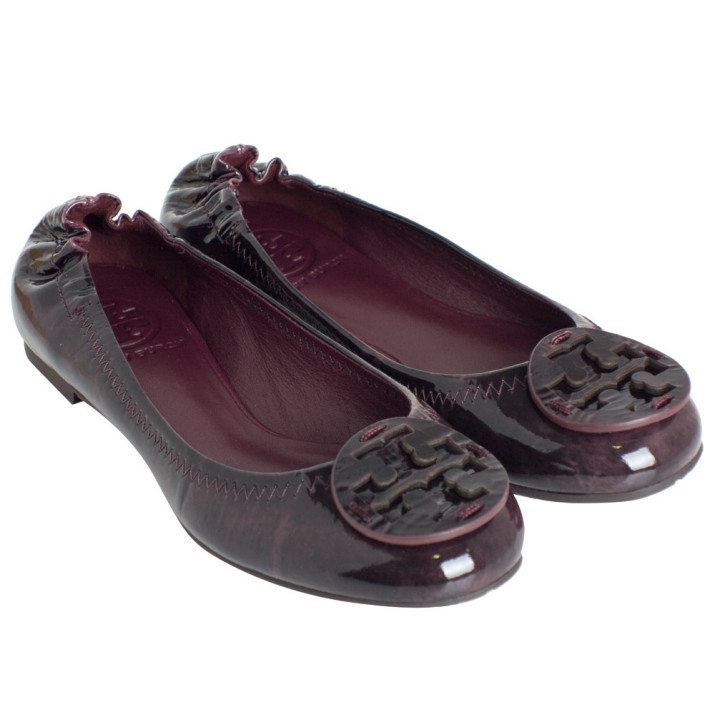 Although she has been flattered by the popularity of her clothing, she is often discouraged by the blatant plagiarism of the designs. She has been known to personally call the head of some companies to complain and even filed lawsuits. Burch’s designs can be found at Neiman Marcus, Scoop, Bergdorf Goodman and Sachs Fifth Avenue. She also has a handful of her own shops across the country in bigger cities and currently is looking at opening stores overseas. 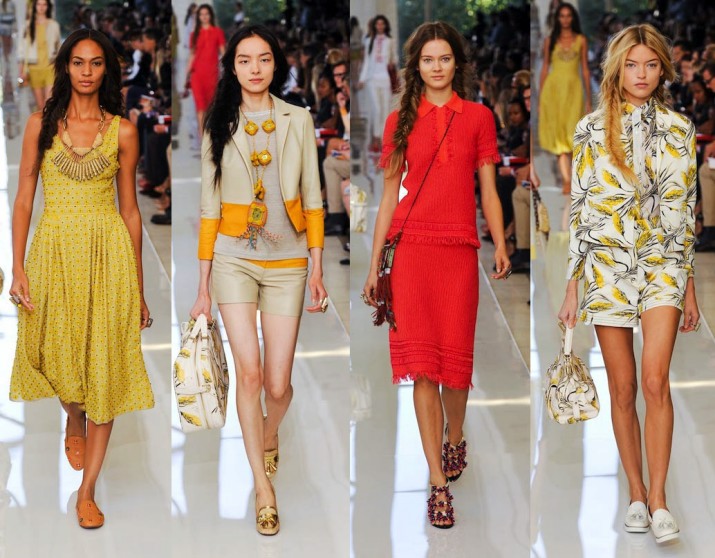 Her personal life hit a bump in the road in 2006, when Chris and Tory separated and filed for divorce. “It wasn’t because he had an affair or I had an affair. At the end of the day, we weren’t going to be able to spend the rest of our lives together,” she said in an interview with Vanity Fair in 2007. She has since been linked to people such as Lance Armstrong. However, her personal failures do not seep into her business. She has remained amicable with her former husband who still serves as CEO and Chairman. 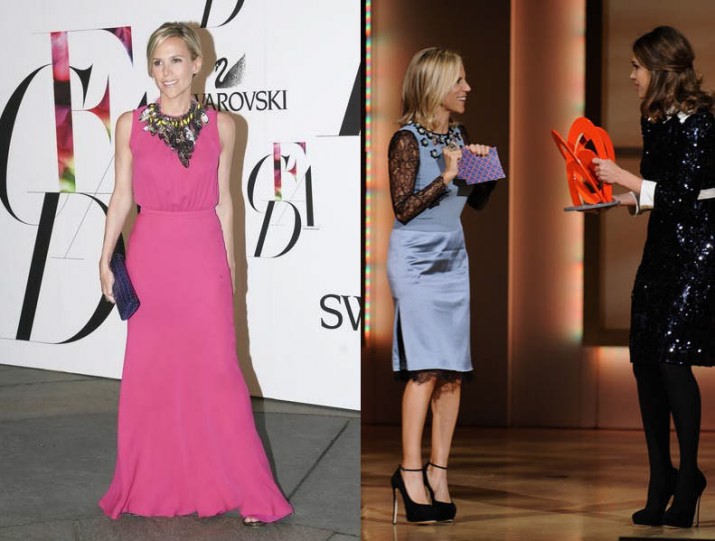 She has also been given many esteemed awards. As if her appearance on Oprah were not award enough, she has been presented with many more since 2005. The Fashion Group International, in 2005, awarded her for Best New Retail Concept. The Accessories Council of Excellence gave her an award in November 2007 for Accessory Brand Launch of the year. Then her famous 2008 win with CFDA cinched her stay in the fashion world.  Also, every big magazine has sung her praises including Vogue, Elle, W, Fortune, and Time. 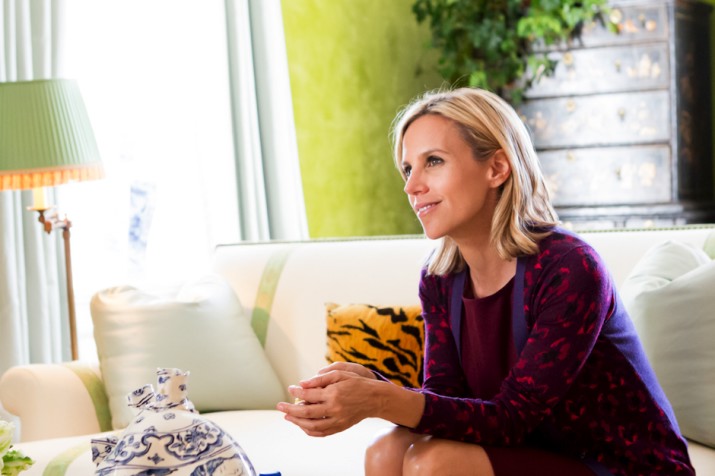 In 2008, Burch founded the Tory Burch Foundation, which provides “economic opportunities to women and their families”. The foundation is currently partnered with ACCION USA, a non-profit domestic microfinance provider founded in 1991, to provide domestic microfinance to low income entrepreneurs in the United States.  Her stores sell several products whose proceeds support the Foundation’s work.

She is on the board of the Memorial Sloan-Kettering Cancer Center and chaired the 2006 spring gala for the American Ballet Theatre. In 2008, she was honored at a Colleague Helpers in Philanthropic Services (C.H.I.P.S.) luncheon that benefited the Children’s Institute, Inc. 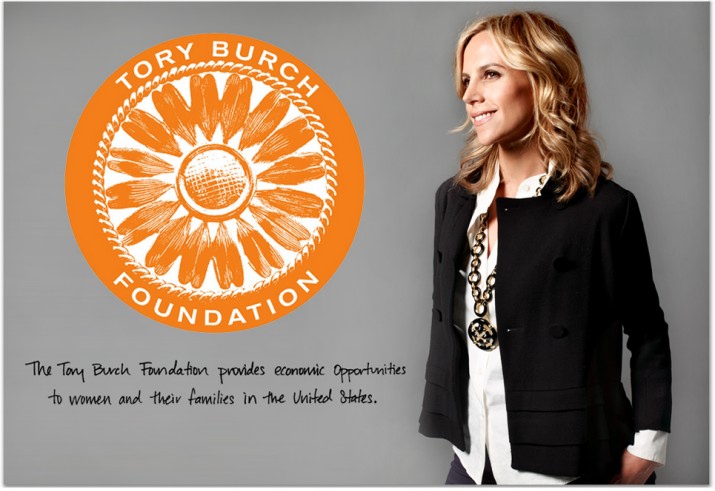 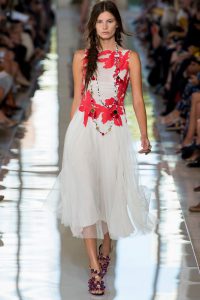