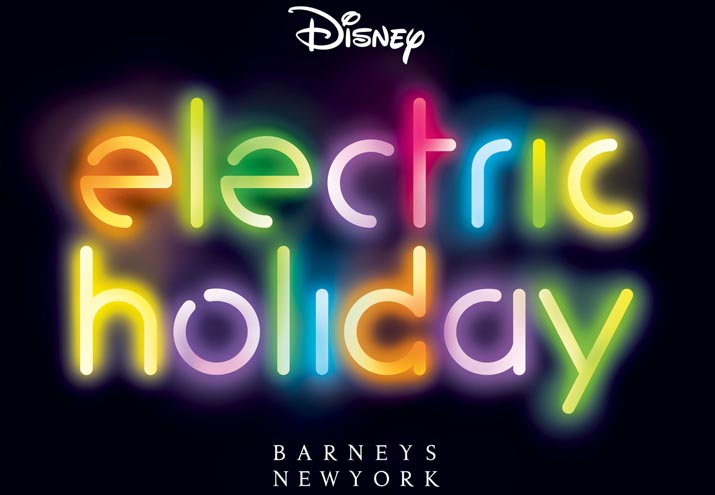 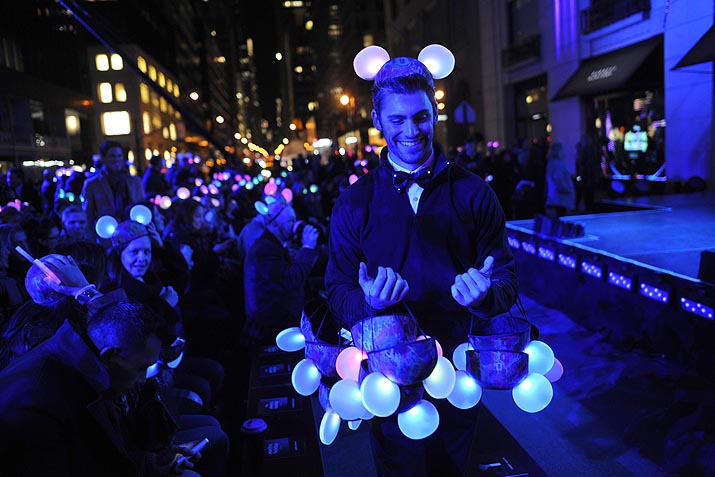 “Disney is proud to be part of New York’s holiday magic this year,” said Robert A. Iger, chairman and chief executive officer of The Walt Disney Company. “Together with Barneys, we’ve created a one-of-a-kind experience that combines Disney’s great characters and storytelling with high fashion for a spectacular celebration of the season.”
As part of the Electric Holiday program, 25% of sales from the limited-edition Electric Holiday product collection sold at select Barneys stores and Barneys.com will be donated to the American Red Cross. This is in addition to the $2 million dollars The Walt Disney Company has already pledged to support relief efforts, including $1 million to the Red Cross for immediate relief and an additional $1 million to support rebuilding efforts in Hurricane Sandy affected communities.  In addition, Disney/ABC Television Group organized a national “Day of Giving” on Nov. 6 2012, seamlessly integrating outreach messaging across various programming and raising more than $18 million for the American Red Cross. 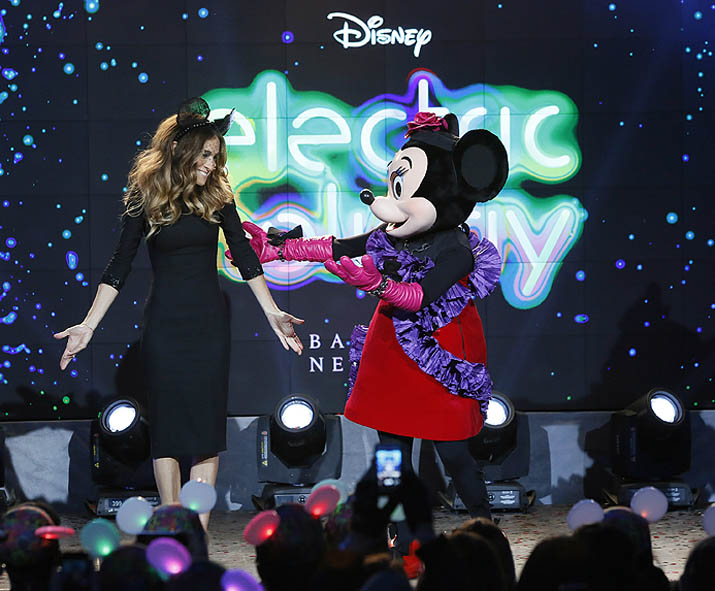 THE ELECTRIC HOLIDAY WINDOWS
The Electric Holiday program and the Madison Avenue flagship’s windows were unveiled featuring ‘Electric Holiday’, a moving art video starring Minnie Mouse on a fun, fabulous fashion adventure in Paris, along with an array of notable fashion personalities and Disney characters.
“Disney is a magical brand and Barneys New York is a surprising brand.  We feel we’ve captured both the magic and the surprise with this holiday project,” said Mark Lee, Barneys New York CEO. “It has been a dream to collaborate with Disney and we at Barneys are grateful that they found it intriguing to mix characters from our different worlds in this way.” 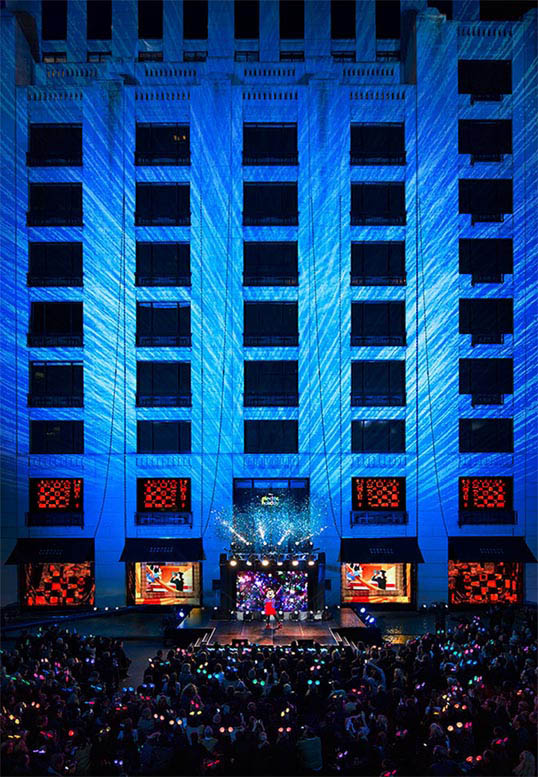 Capturing the essence of the highly stylized fashion world along with the electrically-charged colors and brilliant lights of the magical world of Disney, the video begins with Minnie dreaming of the glamour of Paris. In her dream, she is whisked away to the City of Light, where she comes face to face with revered fashion personalities and takes the runway along with Mickey Mouse, Daisy Duck, and more in fabulous designer fashions. The storyline concludes happily when Minnie wakes up and Mickey presents her with the same designer dress she has just sported in her dream on the catwalk.
The moving art video was conceived to be a playful interpretation of the high fashion world, and will screen for a six-week period in the Madison Avenue windows, as well as in Barneys flagship stores across the country. To help bring the show to life, Oscar®-winning composer Michael Giacchino has created an original score. The video is exclusively on barneys.com, Disney.com and AOL.com. 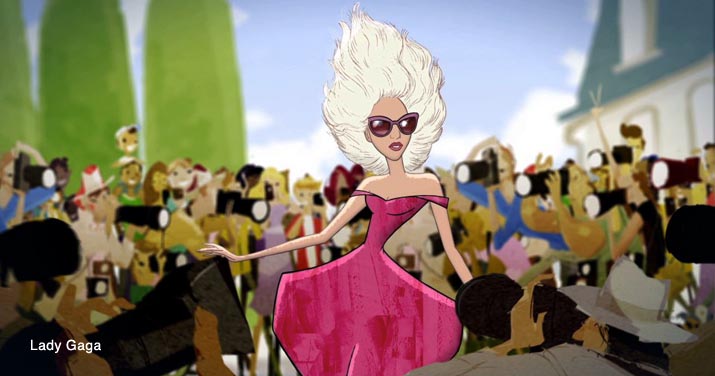 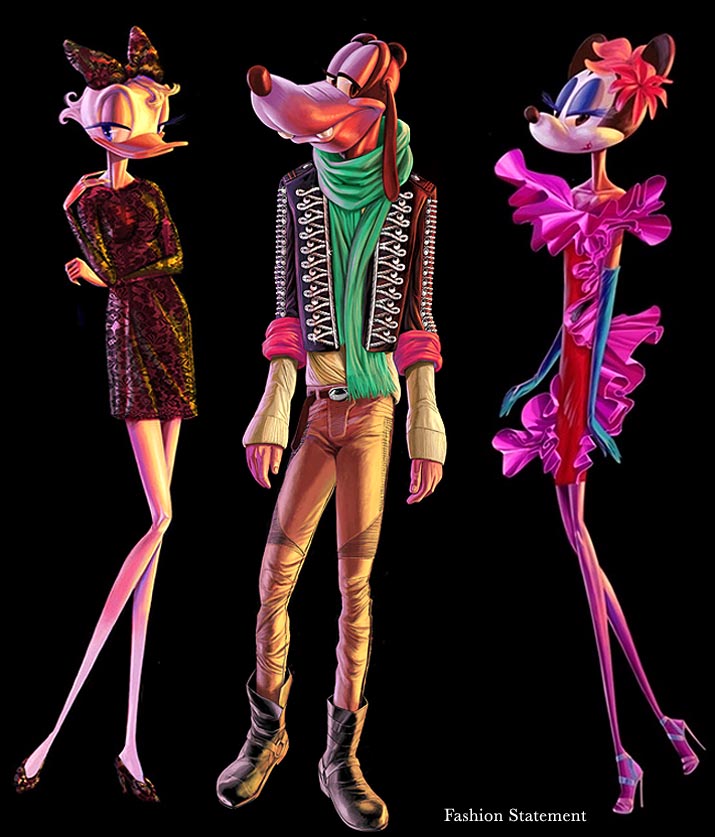 Using innovative technology and hardware, the Madison Avenue windows features unique display technology using Christie® MicroTiles® from Christie Digital Systems USA, Inc, on which the video will play. Working with d3 Technologies’ integrated production system which power the core of the show, utilizing five 4U servers generating 20 simultaneous HD video streams.  An OSRAM Business, Traxon the dynamic lighting and controls manufacturer, supplied almost 500 square feet of LED Mesh and String, as well as intelligent controls to add a layer of video to the window display.
THE ELECTRIC HOLIDAY PRODUCT
Barneys New York and Disney have worked to create a range of exclusive
(XO exclusively ours), limited-edition holiday gift items, available now for a limited time only at Chelsea Passage on the ninth floor in Barneys’ Madison Avenue flagship location in New York, at the company’s Beverly Hills flagship location, and Barneys.com.
In honor of this special project, 25% of the retail price of all items in the Electric Holiday collection sold exclusively in select Barneys New York stores and Barneys.com through January 3rd, 2013, will be donated to American Red Cross disaster relief.
The product assortment includes Disney’s highly collectible Vinylmation figures designed by Paul Smith and Diane von Furstenberg, Mickey Mouse ears designed by Rag & Bone and L’Wren Scott, and smaller items such as holiday ornaments, edible sweets, toys for children, and much more.
In addition to the Electric Holiday product assortment, there will also be a curated selection of vintage memorabilia available at the Madison Avenue flagship location, including a vintage Mickey watch, a signed biography of Walt Disney and specialty vintage Disney toys.
THE ELECTRIC HOLIDAY MYSTERY GIFT CARD HUNT
To celebrate this special event, Barneys New York hosted a New York City-wide scavenger hunt for gift cards on November 14. A “Mickey Messenger” was posted at various locations throughout Manhattan, and only by following clues on Twitter (@BarneysNY) and Instagram (BarneysNYofficial) were participants able to find him. When participants found the Mickey Messenger—identifiable from his Mickey Mouse ears—they simply gave him the secret password to receive a mystery gift card with a value anywhere between $25 to $500. One lucky grand-prize winner received tickets to the evening’s window unveiling event.
THE ELECTRIC HOLIDAY SPONSORS
Barneys New York and Disney have collaborated with AOL and Air France, to help further engage the consumer with the Electric Holiday program.
Barneys NY, Disney and AOL have collaborated to create a co-branded media experience surrounding the Electric Holiday project. Acting as the project’s digital arm, AOL’s StyleList brings the legendary window online with an exclusive showing of the animated short film and behind-the-scenes footage.
Air France is supporting the Holiday 2012 project with an integrated promotion to include a nationwide sweepstakes inviting shoppers and Facebook fans to enter to win a trip to Paris, including two roundtrip business class airline tickets on Air France, four night hotel accommodations at the Hotel Sofitel Paris Le Faubourg, a $5,000 wardrobe and luggage from Barneys New York, and two tickets to Disneyland Paris.
The Electric Holiday moving art video will be displayed in all Barneys New York flagship markets including Beverly Hills, Chicago, San Francisco, Boston, Scottsdale, Dallas and Seattle, as well as on Barneys.com and its luxury content site, The Window.
www.barneys.com/Electric-Holiday
Barneys New York on Twitter: #ElectricHoliday