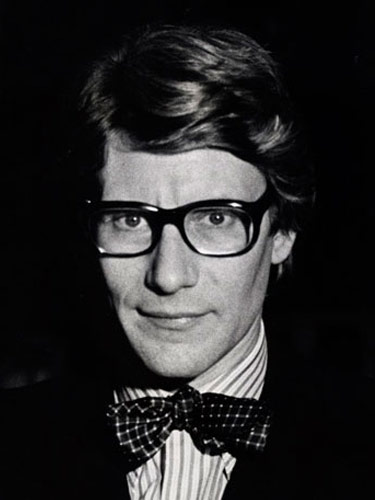 Yves Saint Laurent, “The King of Fashion”, some say he was the supreme designer in the fashion industry. The most consistently celebrated and influential designer of the 20th century. Yves Saint Laurent, arguably did more to advance fashion than any other of his generation pointed the way to the future by consistently reviving the past. His enduring fascination with more gracious or, perhaps, more vital times, informed his refined, theatrical aesthetic and made him the most influential designer of his day.

His color schemes even clash elegantly. He repeaed what Chanel said, “Fashions change, Style remains.” His dream was to give women the foundation of a classic wardrobe, which, by escaping trends, gives them more confidence in themselves. His Smoking (tuxedo) jacket was a shock when it was introduced in 1966. A woman was banned in the 60’s from dining at the Plaza hotel in New York, because she was wearing a YSL pantsuit. 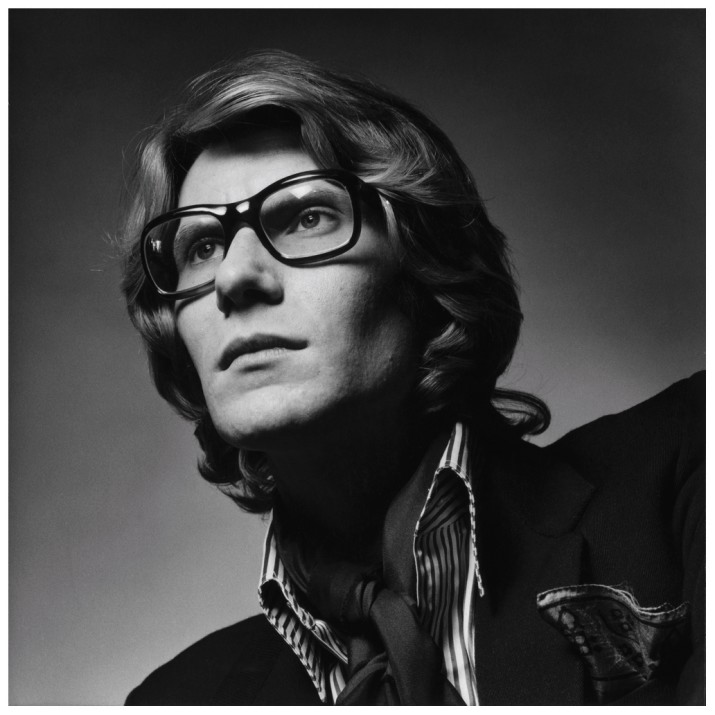 His pants and jackets became a statement for a new generation of women, and he said “I want to shock people, force them to think.” The secret to his style (or styles because there are many) is that he creates clothes that make a woman look great and feel the height of elegance. His celebrated fashions of the ’60s and the ’70s continue to inspire younger generations.

Fashion Designer Yves Saint Laurent was born  on August 1, 1936 in Oran, Algeria to Charles and Lucienne Andrée Mathieu-Saint-Laurent. He grew up in a villa by the Mediterranean with his two younger sisters, Michelle and Brigitte. While his family was relatively well off—his father was a lawyer and insurance broker who owned a chain of cinemas—childhood for the future fashion icon was not easy. Saint Laurent was not popular in school, and was often bullied by schoolmates for appearing to be homosexual. As a consequence, Saint Laurent was a nervous child, and sick nearly every day. 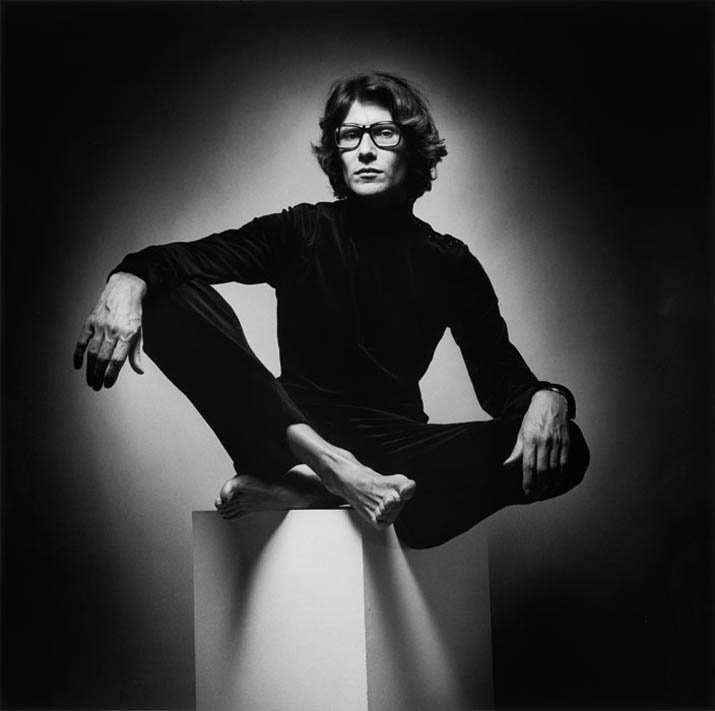 He found solace, however, in the world of fashion. He liked to create intricate paper dolls, and by his early teen years he was designing dresses for his mother and sisters. At the age of 17, a whole new world opened up to Saint Laurent when his mother took him to Paris for a meeting she’d arranged with Michael de Brunhoff, the editor of French Vogue.

A year later, Saint Laurent, who had impressed de Brunhoff with his drawings, moved to Paris and enrolled at the Chambre Syndicale de la Couture, where his designs quickly gained notice. De Brunhoff also introduced Saint Laurent to designer Christian Dior, a giant in the fashion world. “Dior fascinated me,” Saint Laurent later recalled. “I couldn’t speak in front of him. He taught me the basis of my art. Whatever was to happen next, I never forgot the years I spent at his side.” Under Dior’s tutelage, Saint Laurent’s style continued to mature and gain still more notice. 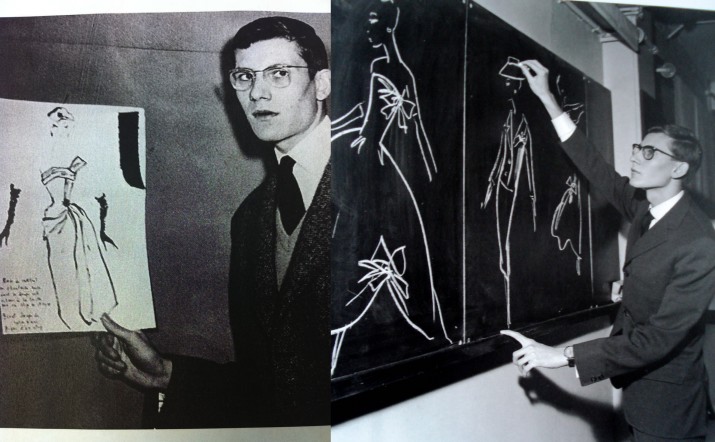 After winning first prize in the International Wool Secretariat contest for his asymetrical cocktail dress in 1954, Saint Laurent went immediately to work for Christian Dior. Saint Laurent became Haute Couture designer when Dior died in 1957. Yves Saint Laurent breathed new life onto the French fashion scene in the early 60’s. At the age of 21, he was the youngest designer to ever head the house of Dior. ??Saint Laurent, then 21, was credited with saving the moribund house of Dior with his Trapeze line, displaying a daring that would flourish through much of his career. He introduced the trapeze dress in his first collection for Dior in 1958. The beat-inspired biker jackets and turtleneck sweaters of his next, and last, collection for Dior were widely disparaged yet sealed his reputation as a designer who elevated the look of the streets to haute couture. 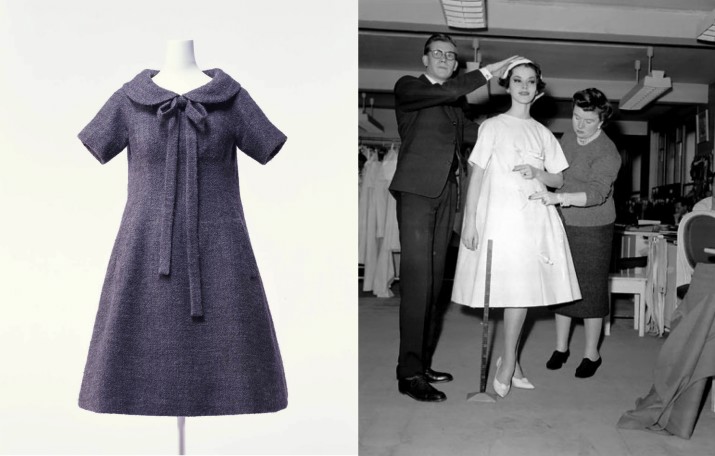 In 1960 Saint Laurent was called back to his home country of Algeria to fight for its independence. He managed to secure an exemption based on health grounds, but when he returned to Paris, Saint Laurent found that his job with Dior had disappeared. The news, at first, was traumatic for the young, fragile designer. Then it became ugly, with Saint Laurent successfully suing his former mentor for breach of contract, and collecting £48,000. 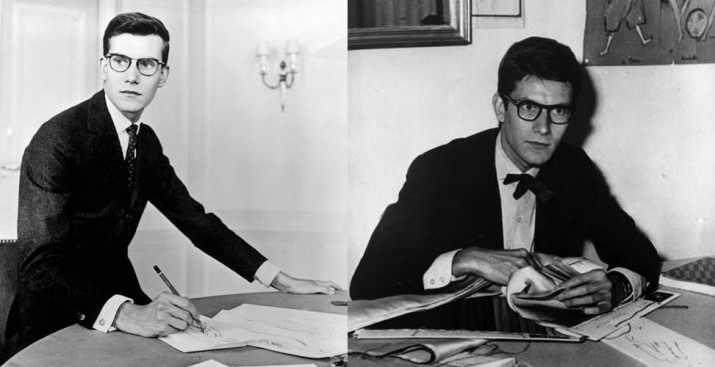 The money and the freedom soon presented Saint Laurent with a unique opportunity. In cooperation with his partner and lover, Pierre Berge, the designer resolved to open his own fashion house. With the rise of pop culture and a general yearning for original, fresh designs, Saint Laurent’s timing couldn’t have been better. 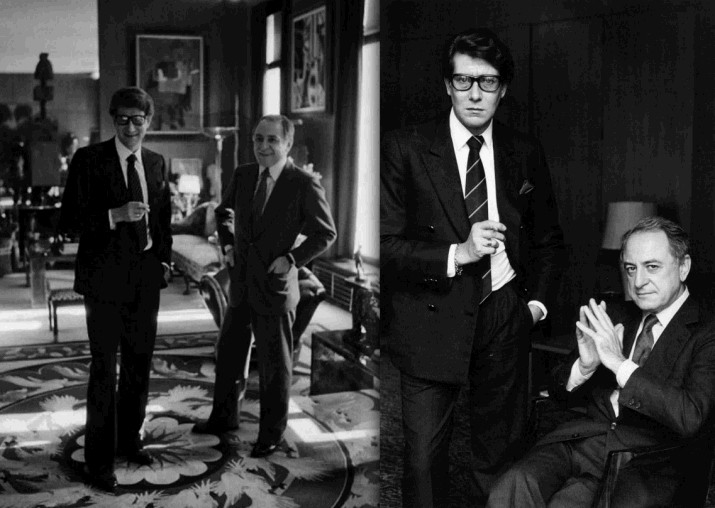 His 1971 radical ‘40s’ collection shocked critics, as did the advertising campaign for the first YSL men’s fragrance, ‘Pour Homme’ which featured Yves himself posing nude. In 1977, YSL launched the very popular ‘Opium’ perfume.  Although a shy person, Saint Laurent believed he was the last true couturier. He maintained the highest standards of classic cut and tailoring, and he received a standing ovation after every collection was presented. 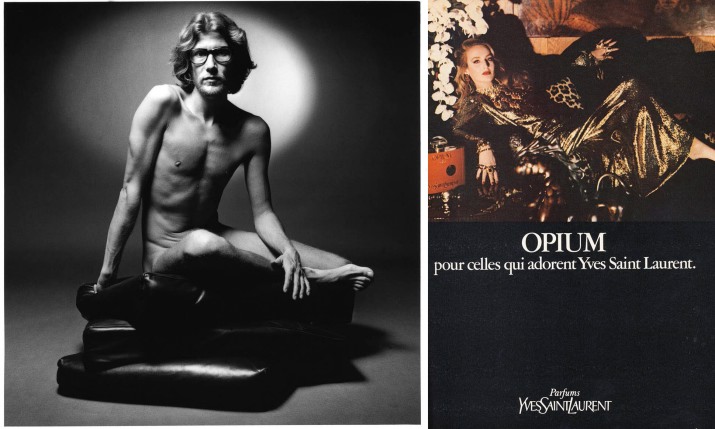 By the 1980s, Yves Saint Laurent was a true icon. He became the first designer to have a retrospective on his work at the Metropolitan Museum in New York City. Under the direction of Berge, who continued to manage Saint Laurent’s firm even though the two had broken up in 1986, the fashion house flourished as a money making venture. 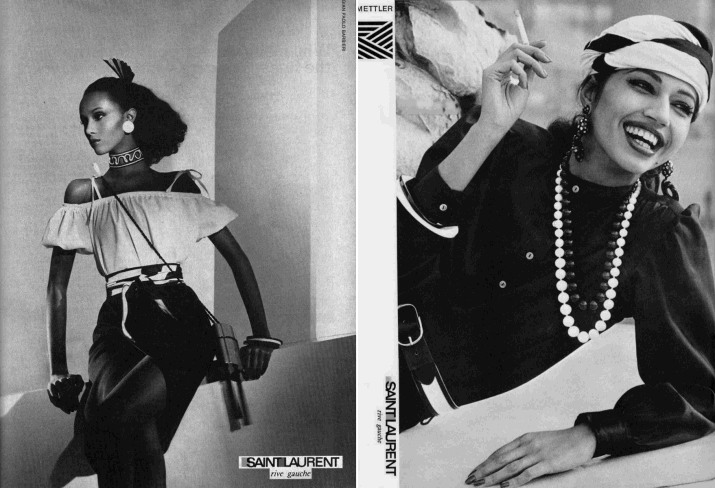 But Saint Laurent struggled. He became reclusive, and fought addictions to alcohol and cocaine. Some in the fashion world complained that the designer’s work had grown stale. In the early 1990s, Saint Laurent found firmer footing. His designs were rediscovered by a fashion elite that had grown tired of the grunge movement that dominated the runways. Saint Laurent, too, seemed to have conquered his demons.

1996 marks two surprising developments concerning the presentation of his new collections. In Summer of 1996, Saint Laurent was the first courturier to show his Haute Couture show live on the Internet. The other move was the decision to stop making big fashion shows for his Pret-a-Porter collection after 30 years of doing so. He now showed his new models only to a few selected journalists on appoitment basis. 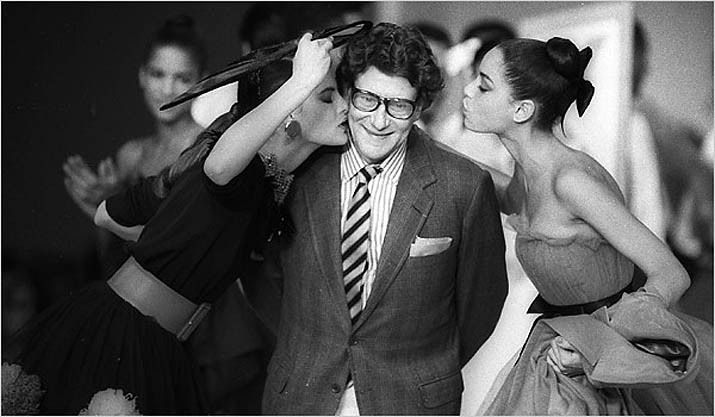 YSL held a 300-model fashion extravaganza at the final match of the 1998 World Cup football tournament in the Stade de France, and the following year he was awarded a ‘Lifetime Achievement’ award from The Council of Fashion Designers of America. By the end of the decade, with Saint Laurent slowing down his work pace, he and Berge had sold the company they’d started, netting the two men a fortune. 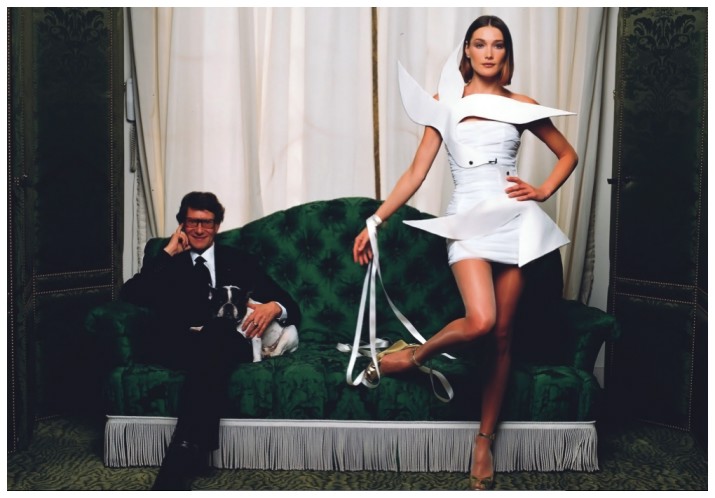 In January 2002, Saint Laurent participated in his final show and then retired for good in Marrakech. Five years later, Saint Laurent’s imprint and importance on French culture was cemented when he was appointed Grand Officer of the Legion d’honnerur by French President, Nicolas Sarkozy. 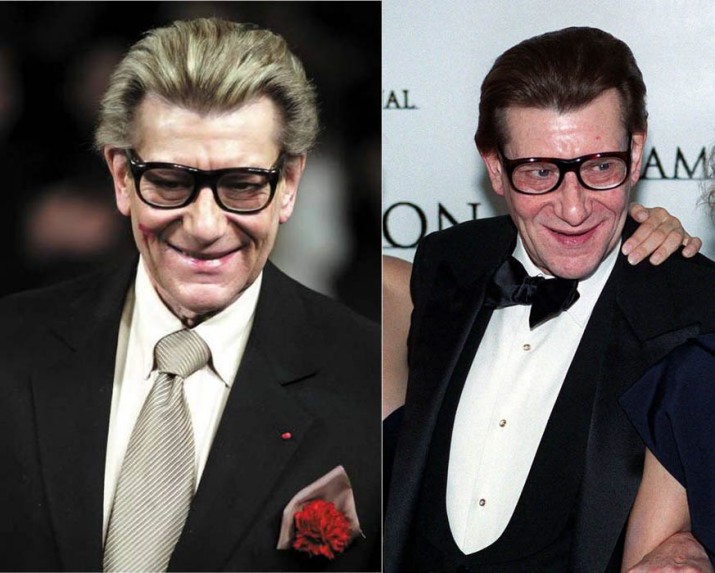 Aged 71, he died from brain cancer on June 1, 2008 on a rare trip back to his native Paris. According to The New York Times, a few days prior, he and Bergé had been joined in a same-sex civil union known as a Pacte civil de solidarité (PACS) in France. His body was cremated and his were ashes scattered in Marrakech, Morocco, in the Majorelle Garden, a residence and botanical garden that he owned with Bergé since 1980 and often visited to find inspiration and refuge. Bergé said at the funeral service: “But I also know that I will never forget what I owe you and that one day I will join you under the Moroccan palms” (translated from French). President Sarkozy said in tribute, ‘Yves Saint Laurent was convinced that beauty was a necessary luxury for all men and all women.’ 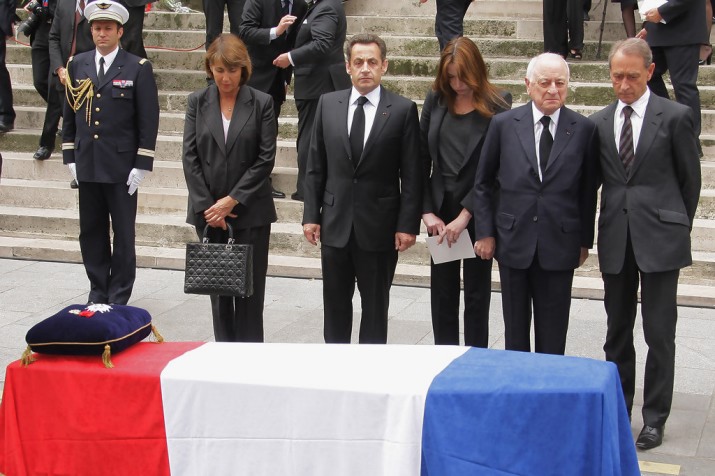 Below Yves Saint Laurent Collection and personal Pictures of Designer 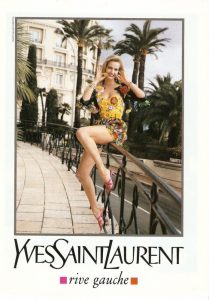