Steven Meisel’s fascination for beauty and models started at a young age. At that time Meisel would not play with toys, but would instead draw women all the time. He used to turn to magazines like Vogue and Harper’s Bazaar as sources of inspiration for his drawings. Meisel dreamt of women from the high society like Gloria Guinness and Babe Paley, who personified to his eyes the ideas of beauty and high society. 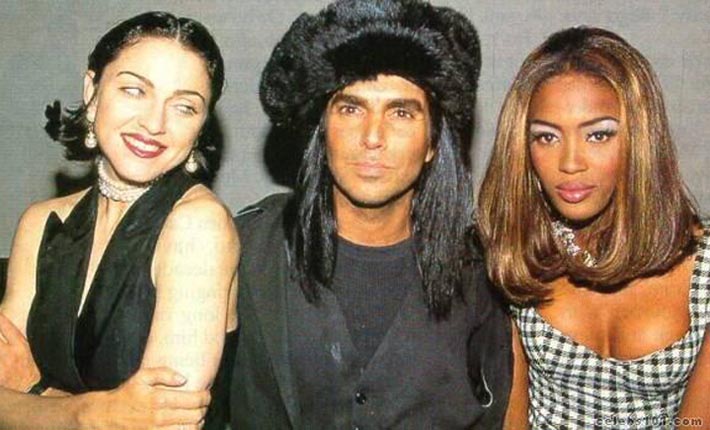 Early life
Other icons were his mother and his sister. As he became obsessed with models such as Twiggy, Veruschka, and Jean Shrimpton, at 12 years old he asked some girlfriends to call model agencies and, by pretending to be secretaries of Richard Avedon, to get pictures of the models. To meet famous model Twiggy, the 12-year-old Meisel stood outside waiting for her at Melvin Sokolsky’s studio. He studied at the High School of Art and Design and Parsons The New School for Design where he attended different courses but, as affirmed in an interview with Ingrid Sischy for Vogue France, he finally majored in fashion illustration. 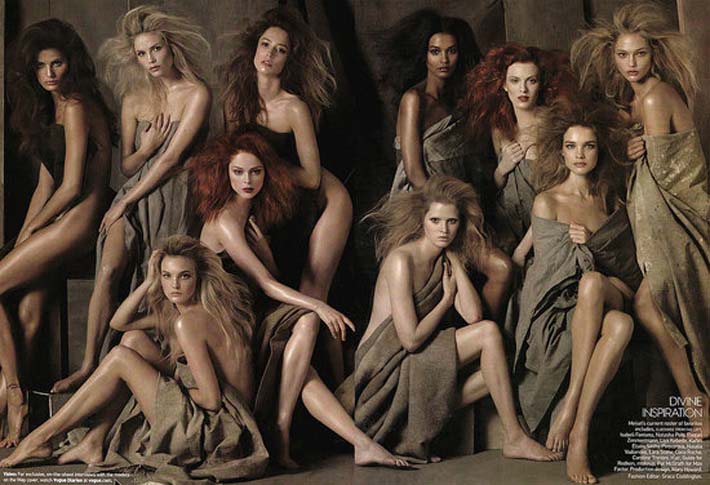 Career
One of Meisel’s first jobs was to work for fashion designer Halston as an illustrator. He also taught illustration part-time at Parsons. Meisel never thought he could become a photographer. He admired photographers like Jerry Schatzberg, Irving Penn, Richard Avedon and Bert Stern. He felt that illustration was a thing of the past and found photography as a lasting medium.
Later on, while working at Women’s Wear Daily as an illustrator, he went to Elite Model Management where two girls working there allowed him take pictures of some of their models. He would photograph them in his apartment in Gramercy Park or on the street: on weekdays he would work at Women’s Wear Daily and on weekends with the models.
One of them was Phoebe Cates. Some of these models took their pictures to Seventeen magazine to show their model books and the people at Seventeen subsequently called Meisel and asked if he wanted to work with them. 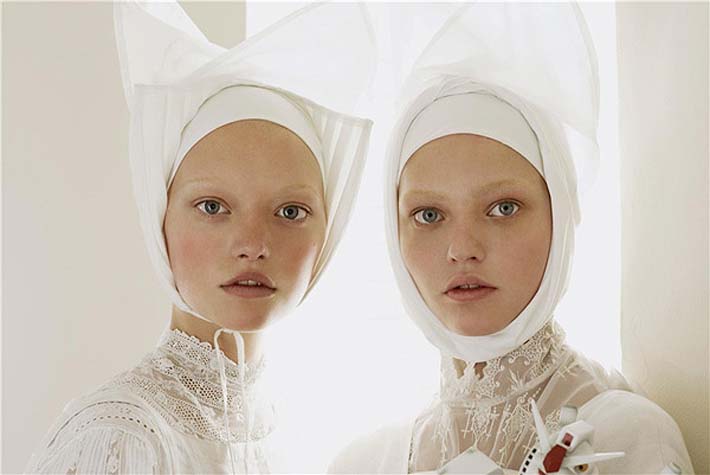 Meisel currently works for many different fashion magazines, including US and Italian Vogue, in which he has photographed every cover for two decades. His studio is located in New York City at 64 Wooster Street but he often rents the studios at Pier 59 in New York and Smashbox Studios in Los Angeles.
Meisel has contributed photos for the covers of several popular albums and singles, including two RIAA Diamond-certified albums, Madonna’s 1984 album “Like a Virgin” and Mariah Carey’s 1995 album Daydream. His work also can be seen on the cover of Madonna’s single “Bad Girl” (a nude), the limited picture disc for Madonna’s UK single release of “Fever” (a partial nude), and Mariah Carey’s single “Fantasy” (simply a different crop of the photo on the cover of the Daydream album). He shot photos of Madonna for her greatest hits album GHV2. 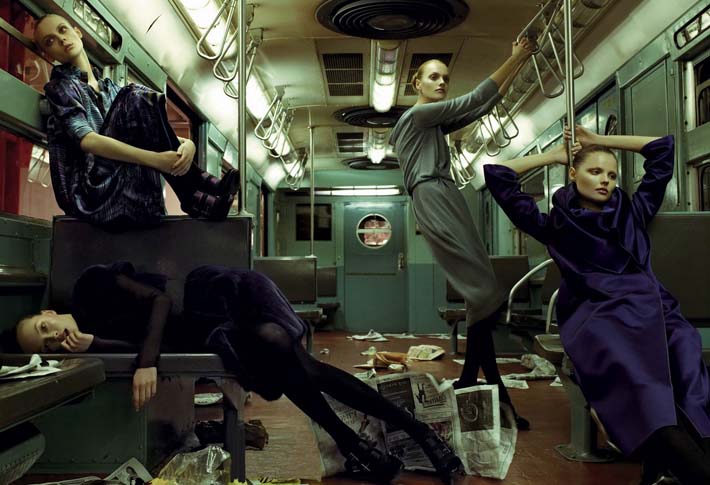 Fashion campaigns
Amongst others, Meisel has shot campaigns for Versace, Valentino, Dolce & Gabbana and Calvin Klein (for whom his campaigns were very controversial). Meisel also shoots Prada campaigns each season — having done so since 2004. In April 2008 he shot friend Madonna for Vanity Fair, and later in the year he shot her for the 2009 spring campaign by Louis Vuitton at Splashlight’s Skylight Studio.
He is a close friend of designer Anna Sui for whom he also shot several campaigns, even though Sui rarely uses advertising to promote her clothing. He also works closely with digital artist Pascal Dangin.
Influence
As one of the most powerful photographers in the fashion industry, Meisel is credited with “discovering” or promoting the careers of many successful models, including top models Linda Evangelista, Naomi Campbell, Christy Turlington, Kristen McMenamy, Amber Valletta, Iris Strubegger, Lara Stone, Coco Rocha, Caroline Trentini, Liya Kebede, Karen Elson, Kara Young and Raquel Zimmerman, propelling them to fame by regularly featuring them in Vogue and various campaigns, notably Prada, considered one of the most desired campaigns in the business.
Meisel’s influence and training seems to also extend past models. 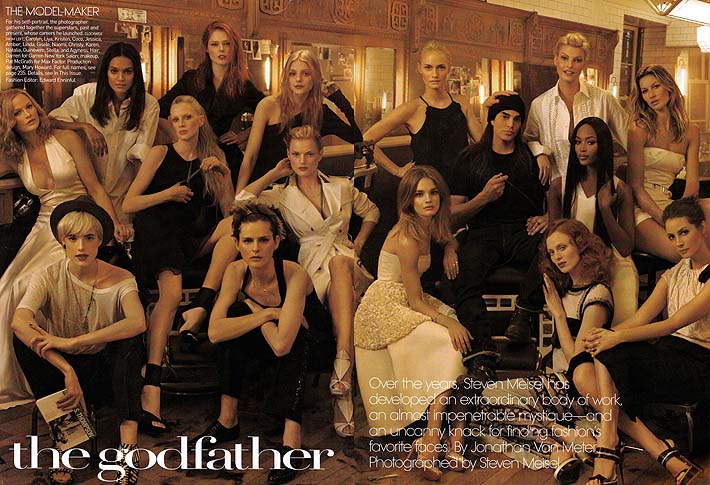 He used his influence among the fashion elite to create an issue of Vogue that would show only black models. The issue was released in July 2008 with the purpose of addressing the racism seen lately in fashion magazines, runways, and advertising campaigns.

Anna & Franca
Meisel has been a protégé of both Franca Sozzani and Anna Wintour, editors-in-chief of Italian and American Vogue, respectively. For the former, he photographs the cover of every issue, something generally unheard of in the ever changing fashion industry.
(click to enlarge photo) 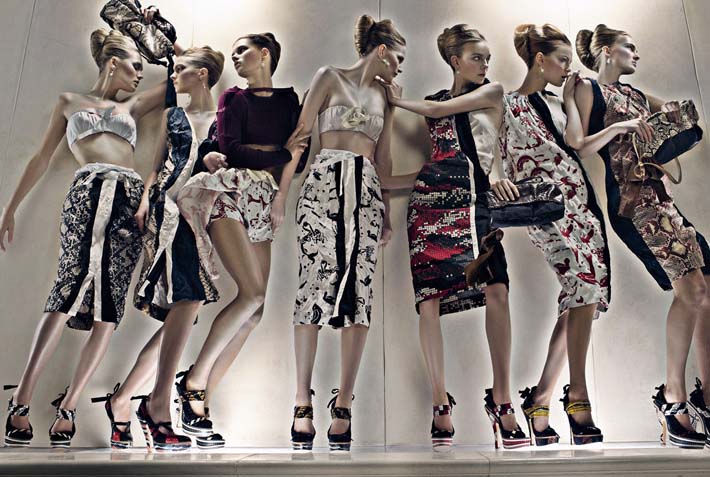 Meisel often creates layouts which are controversial, by juxtaposing fashion and politics and/or social standards. For example, in the September 2006 issue of Vogue Italia, Meisel played with the concept of restricted liberties post-September 11th America, with the models portraying terrorists and highly trained policemen. It caused a stir in the press, as the models were presented in violent compositions where they could be seen as being victimized. It also elicited a negative response from feminists which saw the role of the women as being undermined by their male counterparts.
Artist Rep agency Art + Commerce represents Steven Meisel for image licensing and advertising.
text courtesy of: Wikipedia