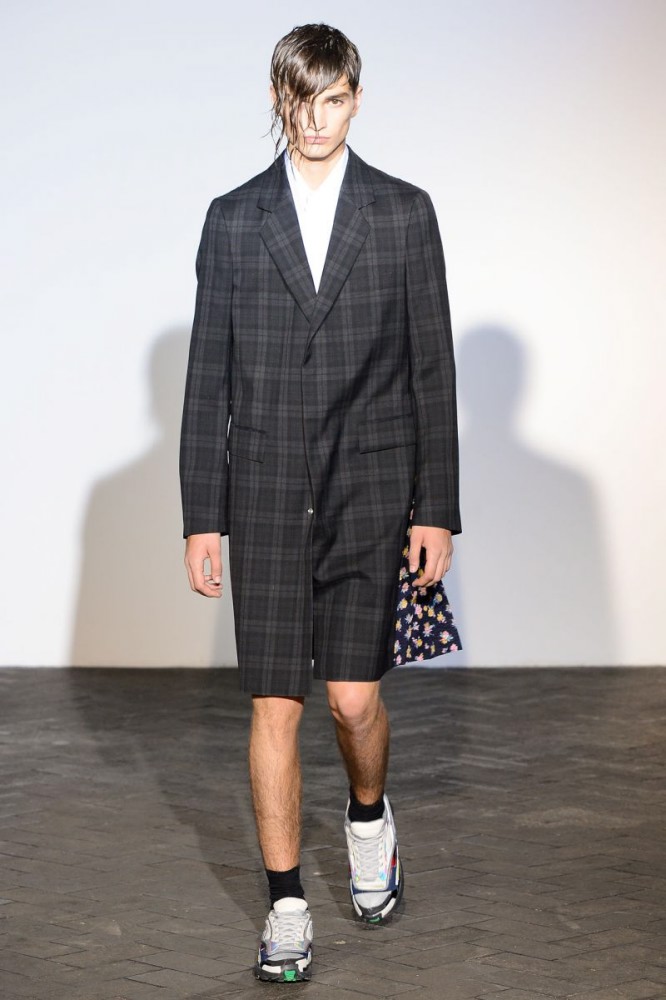 Raf Simons was born on 12 January 1968 in Neerpelt, in the province of Limburg, Belgium, to an army night watchman (Jacques Simons) and a house cleaner (Alda Beckers).  Aside from his sub-culturally-inspired and independent aesthetic, is a designer best-known for his dramatic career change – from the world of industrial and furniture design to the world of menswear. Simons launched his label in 1995 and, ten years later, in 2005 was appointed creative director of Jil Sander – a role in which he flourished, even though it was one he had to take on without having met the label’s eponymous founder first.

"So I approached it in the way I thought of the brand – I loved and respected the brand, it was one of my favourites," he said. The first time he did meet Sander was at a hotdog stand.
Simons graduated in Industrial Design and Furniture Design in 1991 and went on to start working as a furniture designer for various galleries, having previously interned at the design studio of Walter Van Beirendonck. Van Beirendonck took him to Paris Fashion Week and that was when Simons first saw a fashion show – Martin Margiela’s all-white show in 1991 – which inspired Simons to turn to fashion design.

Encouraged by Linda Loppa, head of the fashion department at the Antwerp Royal Academy, Simons – self-trained – became a menswear designer and launched his Raf Simons label. His first collection was in Fall-Winter 1995, and featured two street models in a video presentation. From Fall-Winter 1995 to Spring-Summer 1997, Simons’ collections were shown either in presentations or videos. Fall-Winter 1997 saw his first runway show in Paris, France with a look of ‘American college students and English schoolboys with a background of New Wave and Punk’.

He designed the menswear outfits for Ruffo Research for spring/summer 1999 and autumn/winter 1999-2000. In March 2000, Simons shut down his company to take a sabbatical. Following a new deal with Belgian manufacturer, Gysemans Clothing Industry, the company was started back up again in 2001.

During this time, Simons’ international prominence grew with the collection for Spring-Summer 2002 (Woe Onto Those Who Spit On The Fear Generation…The Wind Will Blow It Back) becoming one of his most influential due to its ‘layered, hooded, sinister image of the urban guerrilla’.

Simons was appointed head professor of the fashion department of the University of Applied Arts, Vienna, Austria in October 2000 – a position he held until June 2005. In 2003, Simons received the Swiss Textiles Award, receiving material benefits at the value of 100,000 euros. The company was restructured in October 2004 with a distribution deal with Futurenet (Europe and USA) and Mitsui (Asia), followed by a license agreement with Futurepresent (joint-venture of Futurenet and Mitsui Italia). This deal came to an end with the Spring-Summer 2011 collection.

In June 2005, the new Raf by Raf Simons line launched.To coincide with the label’s 10th anniversary, Raf Simons Redux, a book by Peter De Potter and Simons, was published. Simons was named creative director of Jil Sander – menswear and womenswear – in July 2005.

He developed a seasonal special edition collection for Fred Perry in 2008 – a collaboration which is ongoing. In 2008, two flagship Raf Simons stand-alone stores opened in Tokyo and Osaka, Japan, in collaboration with the artists Sterling Ruby and Roger Hiorns. 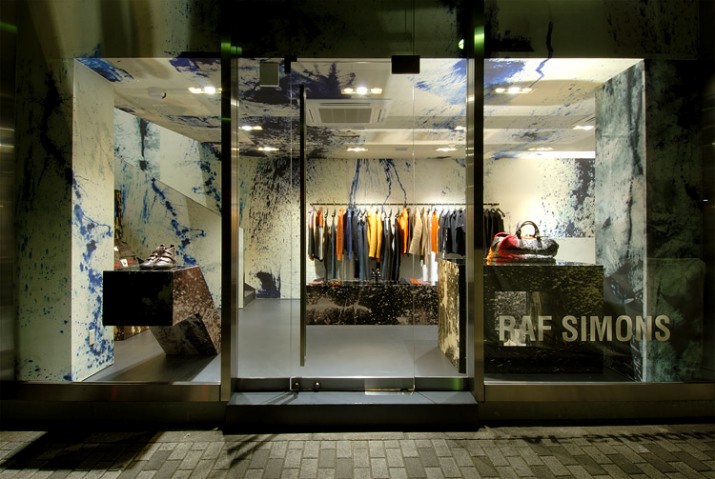 In 2011, Raf by Raf Simons was replaced by Raf Simons 1995, a diffusion line incorporating elements from Simons’ early collections. Raf Simons 1995 also includes homeware, namely blankets and cushions. On December 13 2011, Simons was said to be finalising contracts which would see him replace John Galliano as creative director of Dior following Galliano’s dismissal earlier in the year. 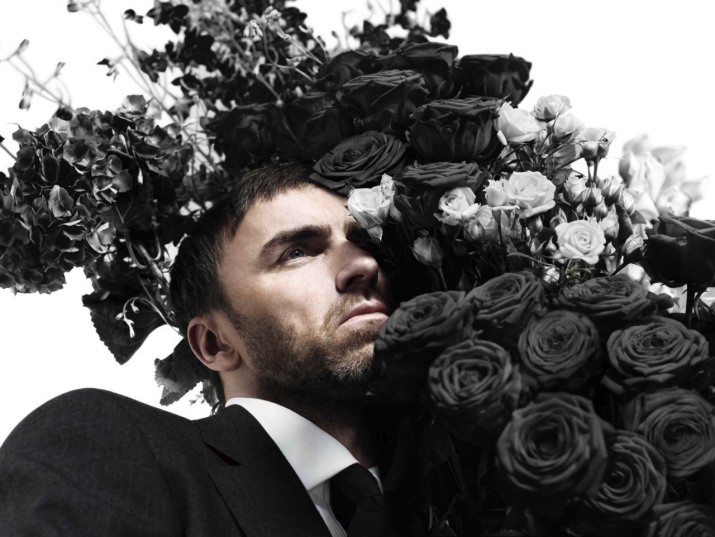 On April 9 2012, it was confirmed that Simons had taken over as the new creative director of Dior and would show his first collection during the Couture collections in July.  Simons’ first collection for Haute Couture Fall-Winter 2012 was critically acclaimed, as the designer focused on the 1950s by playing with some of Christian Dior’s famous silhouettes: the A line and the H line, and the Bar jacket. 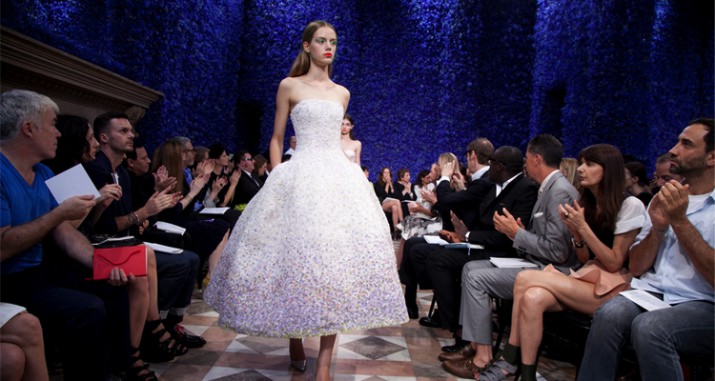 He currently lives and works in Antwerp, Belgium and Paris, France. 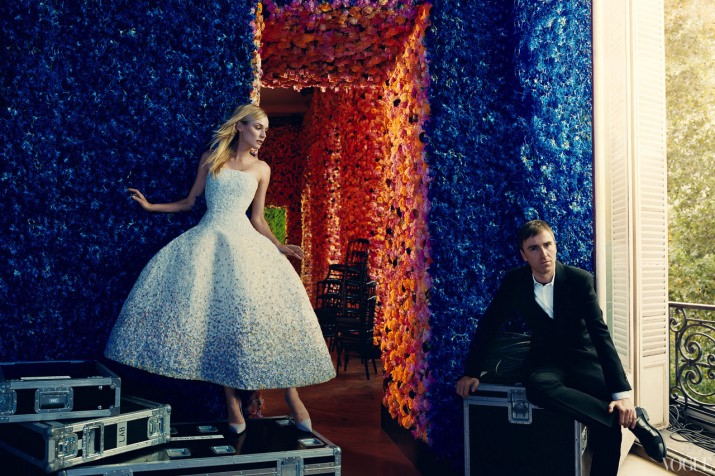 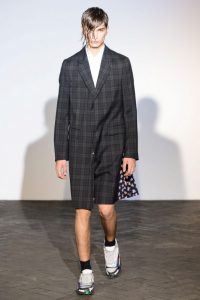