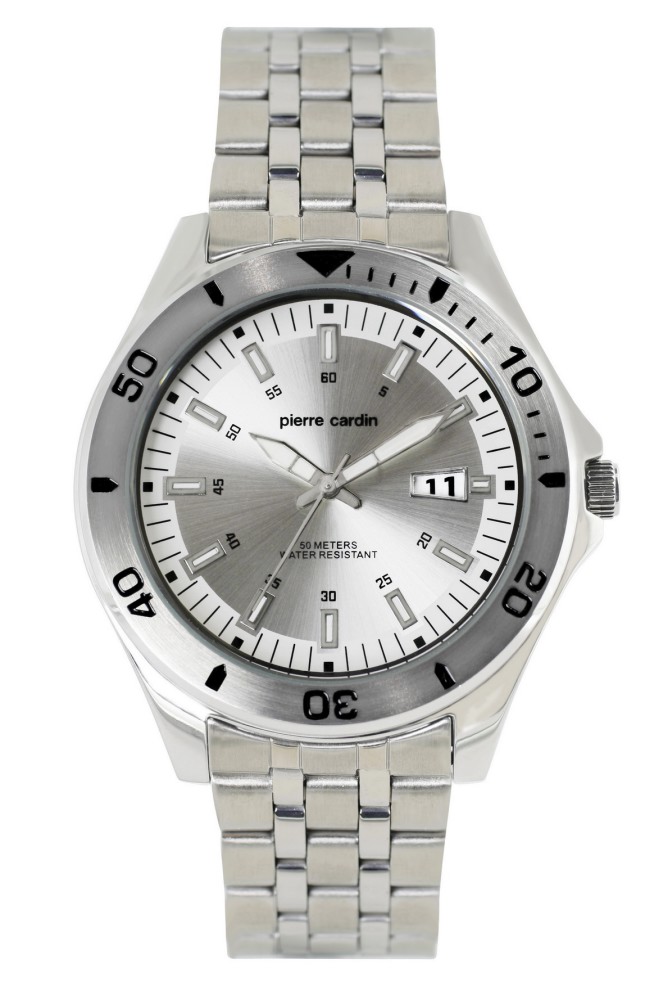 Pierre Cardin is an Italian-born French high fashion designer best known for his geometric avant-garde designs and his Space Age designs. He prefers geometric shapes and motifs, often ignoring the female form. He advanced into unisex fashions, sometimes experimental, and not always practical. He introduced the "bubble dress" in 1954.

In the 1960s his use of stark tunics, goggles and helmets launched the Space Age look. Cardin expanded into the automobile market in the early 70s and designed haute couture muscle car interiors. He now owns a chain of Maxim hotels and restaurants.
Born Pietro Cardin July 2, 1922 to French parents in at San Biagio di Callalta near Treviso, Italy, Pierre Cardin became interested in fashion early. Cardin, aged 14, worked as a clothier’s apprentice, learning the basics of fashion design and construction. In 1939, he left home to work for a tailor in Vichy, France, where he began making suits for women. There, he began to hone the skills that would make him one of the most successful designers of the twentieth century.
During World War II, he worked in the Red Cross, launching humanitarian interests that continue to this day.
Cardin moved to Paris in 1945, at the end of World War II. During his first five years in France’s capital city, Cardin jumped rapidly from job to job. He found work in the Paquin fashion house, started by famous dress designer Jeanne Paquin, who died before Cardin’s time there. Cardin moved from Paquin to the Schiaperelli fashion house that same year. 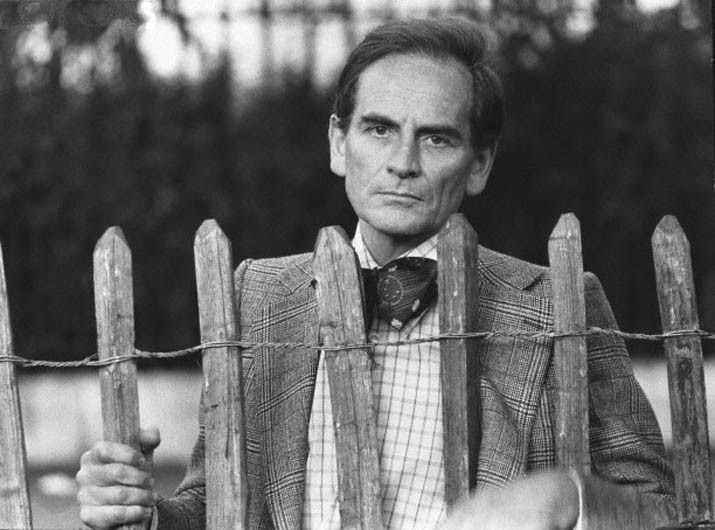 Also in 1945, he became acquainted with French film director Jean Cocteau. Cocteau hired Cardin to design dresses for his film La belle et la bête (Beauty and the Beast), which premiered in 1946, the same year that Cardin began work at Christian Dior’s newly opened fashion house. In 1947 he became head of Christian Dior’s tailleure atelier, but was denied work at Balenciaga.
Cardin is credited with helping to design Dior’s "New Look," a style of dress intended to emphasize femininity in women’s clothing after the period of women taking on traditionally masculine roles during World War II. Although he was once part of a team that helped design a style that accentuated womanliness, Cardin is now best known for creating clothes that have the exact opposite effect. His cuts are often said to be planar, geometric, and even irreverent of the female form.
Pierre Cardin left Dior to start his own company in 1950. He started out by designing clothing for stage productions, but soon built up a client base. Christian Dior sent Cardin roses as congratulations, and, a much more important gesture of encouragement, directed his overflow clients to Cardin’s new business. Cardin says of his company’s beginning, "I started with 20 people. I was successful immediately."

In 1953, Cardin released his first collection of women’s clothing and became a member of the Chambre Syndicale, a French association of haute couture designers. In 1954, he opened his first boutique for women, called Eve. That same year, his bubble dresses became an international success. The design is still popular today: a loose-fitting dress is tightened near the waistline, broadens, and then is brought back in at the hem, creating a "bubble" effect. 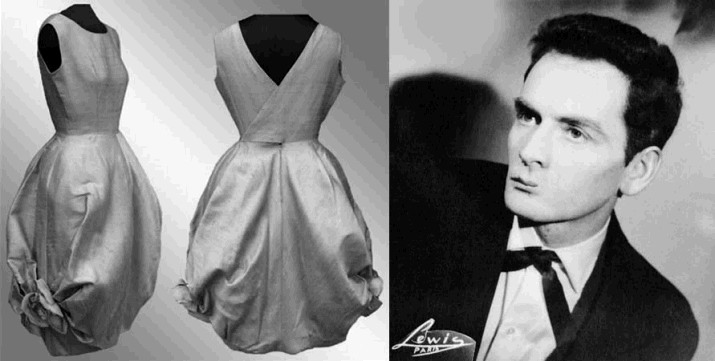 Bubble Dress
Soon, though, Cardin was looking outside France for inspiration. He visited Japan in 1957, becoming one of the first Western designers to seek out Eastern influences. In Japan, he scoped out business opportunities while studying the country’s fashions for new ideas. The Japanese fashion school Bunka Fukusoi made him an honorary professor, and he taught a one-month class there on three-dimensional cuts.
Also in 1957, Cardin opened his first boutique for men in Paris, called Adam. In 1958 Cardin received the "Young Designer" aeard in Boston, USA. Two years later, in 1959, Cardin was expelled from the Chambre Syndicale. The most commonly told version of the story is that his expulsion was related to his creation of a ready-to-wear line for women being sold in the Paris department store Printemps. At the time, haute couture designers worked exclusively for private clients, for whom clothes were custom-made, so Cardin’s move was seen as a threat to the traditional values of the fashion world. Another version of the story has Cardin resigning from the organization in protest of its banning of press coverage.
Whatever the case may be, the decision to make haute couture fashion available to people other than private clients was a first for a prominent French designer. It was also telling of what Cardin’s business would become: a corporation less concerned with the traditional business model of a Paris fashion house and more focused on participating in lucrative endeavors. Cardin himself has said, "I’ve done it all! I even have my own water! I’ll do perfumes, sardines. Why not? During the war, I would have rather smelled the scent of sardines than of perfume. If someone asked me to do toilet paper, I’d do it. Why not?" Cardin was soon reinstated to the Chambre Syndicale.
The 1960s were a varied and successful period for Pierre Cardin. In the first years of the decade, he began to design clothes inspired by science. This would become known simply as the "Space Age look." Interestingly, just as Japanese fashion had inspired Cardin years before, some Japanese designers are still heavily influenced by the futuristic style that Cardin pioneered. A clothing collection launched around this period surprised all by displaying the designer’s logo on the garments for the first time.
He presented first men collection by 250 French students the "Cylinder" line, created men’s ready-to-wear, women’s ready-to-wear and acccessories departments.

Another success for Cardin came in 1966, when, after rounding up "all the triplets in Paris" to be the models for its debut, Cardin released his first clothing line for children. The 1960s also saw Cardin’s introduction of a new casual style of men’s dress clothing that had a major impact on the look of American and British menswear. Cardin was awarded the "Golden Spinning Wheel" – "Le Rouet d’Or" by the town of Krefeld, Germany in 1966.
Cardin resigned from the Chambre Syndicale in 1966 and began showing his collections in his own venue, the "Espace Cardin" (opened 1971) in Paris, formerly the "Théâtre des Ambassadeurs", near the Embassy of the United States in Paris. The Espace Cardin is also used to promote new artistic talents, like theater ensembles, musicians and others. He was also contacted by Pakistan International Airlines to design uniforms for the flag carrier. The uniforms were introduced in 1966 to 1971 and became an instant hit. 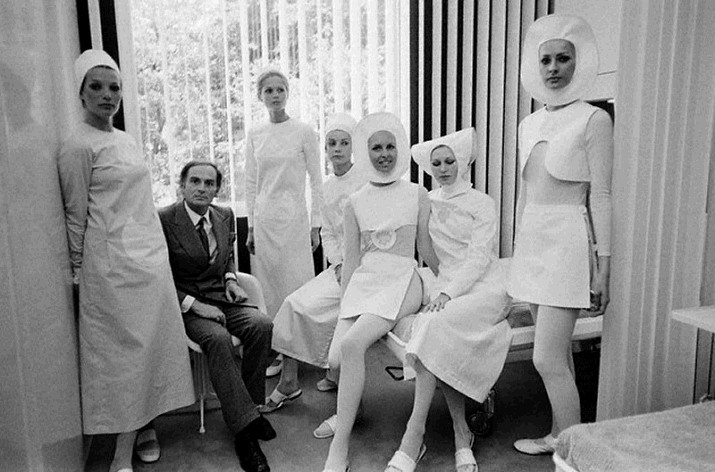 In 1974 Pierre Cardin received the "EUR", wich is an Italian oscar award, given for his  varied activities in the world of show-business.
In the decades since then, the Pierre Cardin fashion house has grown into an empire. Cardin has licensed large numbers of diverse products to carry his famous initials. Some of these products include furniture, frying pans, bottled water, and a select number of 1973 AMC Javelin cars. He also owns a restaurant chain called Maxim’s. Cardin’s extensive use of branding has brought much criticism from other high fashion designers, but it seems to be becoming the industry norm rather than staying the exception. 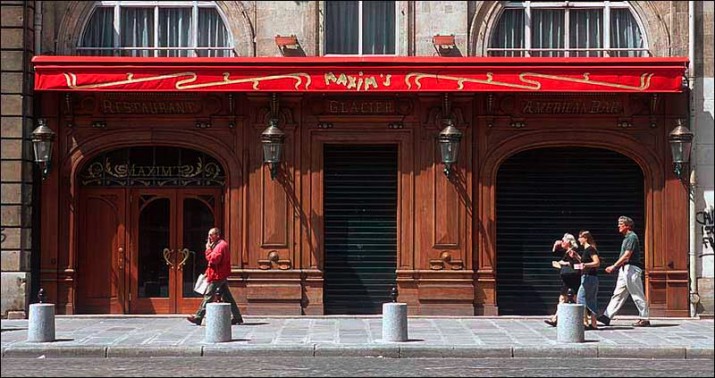 Cardin was a member of the Chambre Syndicale de la Haute Couture et du Prêt-à-Porter from 1953 to 1993. Like many other designers today, Cardin decided in 1994 to show his collection only to a small circle of selected clients and journalists. After a break of 15 years, he showed a new collection to a group of 150 journalists at his bubble home in Cannes.

Cardin’s bubble home
Pierre Cardin has inspired controversy in other areas, as well. He owns a castle in the small town of Lacoste, France that formerly belonged to the Marquis de Sade. Cardin has spent millions acquiring land and property in the area, with plans to make it a hot-spot resort, often remarking that this is a way of saving the southeastern French village. Not all of the village’s residents see his presence there in the same light. Lacoste has consequently been the site of disputes, with Cardin insisting that he is the village’s benefactor, and residents condemning his actions as detrimental to the village’s atmosphere and reputation. 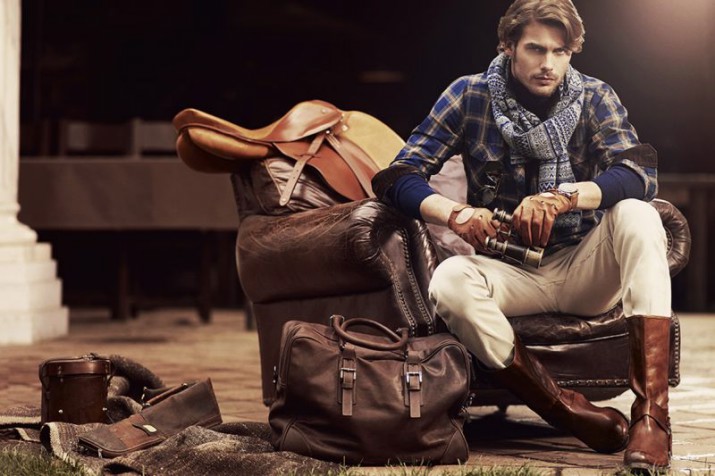 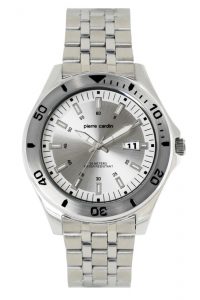