Yet in the photographs of Peter Lindbergh

You do see these extraordinary women
In all their glory
Without their disguises
Without the ‘front’
Stepping right out from behind the shiny surface
They are used to showing us.
Those words were written by Wim Wenders, who recently handed his close friend Peter Lindbergh a Lucie Award, colloquially known as the photographers Oscar. When someone once described Peter’s work as a collection of love letters to women he considers beautiful, be they fashion models or actresses like Jeanne Moreau, Kate Winslet, Isabelle Huppert or Penelope Cruz, it was an elegant salute to Peter’s essential romanticism.
However, he has also photographed a lot of men and male icons, including James Coburn, Kirk Douglas, Samuel L. Jackson and Mick Jagger, to name just four. Moreover, Peter’s romanticism has always been underscored by an element of evocative authenticity, redolent in some cases of the work of Dorothea Lange or August Sander, hence its appeal to a wider public outside the world of fashion. Peter Lindbergh is extremely collectable: a print of his famous portrait of Keith Richards realised $120,000 at an auction at Philips de Pury in New York in October 2004, and even signed working prints have been known to fetch over $40,000.
In 2001, he was appointed Chevalier de l’Ordre des Arts et Lettres, one of the French Republic’s most prestigious honours, and one of the few that really has to be earned. Another distinction of which he remains particularly proud is his election in 1995 as Honorary Member of the Year by the highly exclusive German Art Directors Club. That year also brought him the Raymond Loewy Design Award, Europe’s most prestigious award for design.
Inner Voices won the IFTC Best Documentary award at the International Festival of Cinema in Toronto in 2002. Lindbergh also carried off the awards for Best Fashion Photographer in Budapest in 1990, Barcelona in 1991, Paris in 1994 and 1997, New York in 2005 and again in 2008 in Madrid.
Peter Lindbergh did not become a fashion photographer until he was in his mid-thirties. Peter was born late in 1944 in the German province of Posen, now in Poland. Escaping westwards at the end of the war, the family was taken in by relatives in Duisburg, who had a sheep farm on the open land across the Rhine from the Krupp steelworks. At seventeen, Peter went to Switzerland for about eight months, working as a shop window designer before moving to Berlin, where he enrolled in courses at the Berlin Art Academy, supporting himself by various casual jobs, including a stint at the Berlin Telegraaf newspaper.
Tiring of endless still life classes, he hitchhiked to Arles and hung out there for a while: “I preferred actively seeking out van Gogh’s inspirations to painting melons in art school. The roof of the house I lived in can be seen in one of van Gogh’s paintings. I remember shaving off little slivers of a wooden bridge in another of his paintings and sending them to friends in Berlin. Well, I was young and didn’t know any better! I only found out years later that the bridge was a replica. The original bridge was destroyed in the war”.
Returning to Germany in 1967, after hitchhiking around southern France, Spain and North Africa for a couple of years, Peter enrolled in the Krefeld art school. Leaving a year before graduation because of strikes by staff and students, his work was exhibited in the cutting edge gallery run by Hans Mayer and Denise René in Krefeld: “My work was very voluptuous, painting great big things that were…um…very big. At one point, my work became very conceptual. I was a great admirer of Joseph Kosuth and the Conceptual movement. In the end, I couldn’t see myself anywhere in my work”.
So Peter began his photographic career in 1971, assisting the Düsseldorf photographer Hans Lux: “It was accidental. He needed an assistant. I suppose one of the reasons was that I preferred working with other people to being the lonely artist in the atelier”. By 1973, Peter was working in his own right as an advertising photographer. Some 70% of his already powerful images were black and white, which was unusual in a decidedly colour milieu: “The real world is in colour so if you use black and white, you take it out of the real world, out of the banal.”
Peter’s work was noticed in the late 1970s by Willi Fleckhaus, Art Director of the legendary magazine Twen, who remarked that Peter’s advertising images did not look like advertising and commissioned a fashion editorial occupying several pages. This shoot led to a fourteen-page fashion editorial in Stern in 1978, after which Peter made the logical move to Paris. Moving to Paris in 1978, to concentrate on high-fashion, he photographed many top models including Christy Turlington, Naomi Campbell, Linda Evangelista, Cindy Crawford, Stephanie Seymour, Isabella Rossellini, Nastassja Kinski and Tatjana Patitz as well as other projects with Karl Lagerfeld, Daryl Hannah, Giorgio Armani and more. 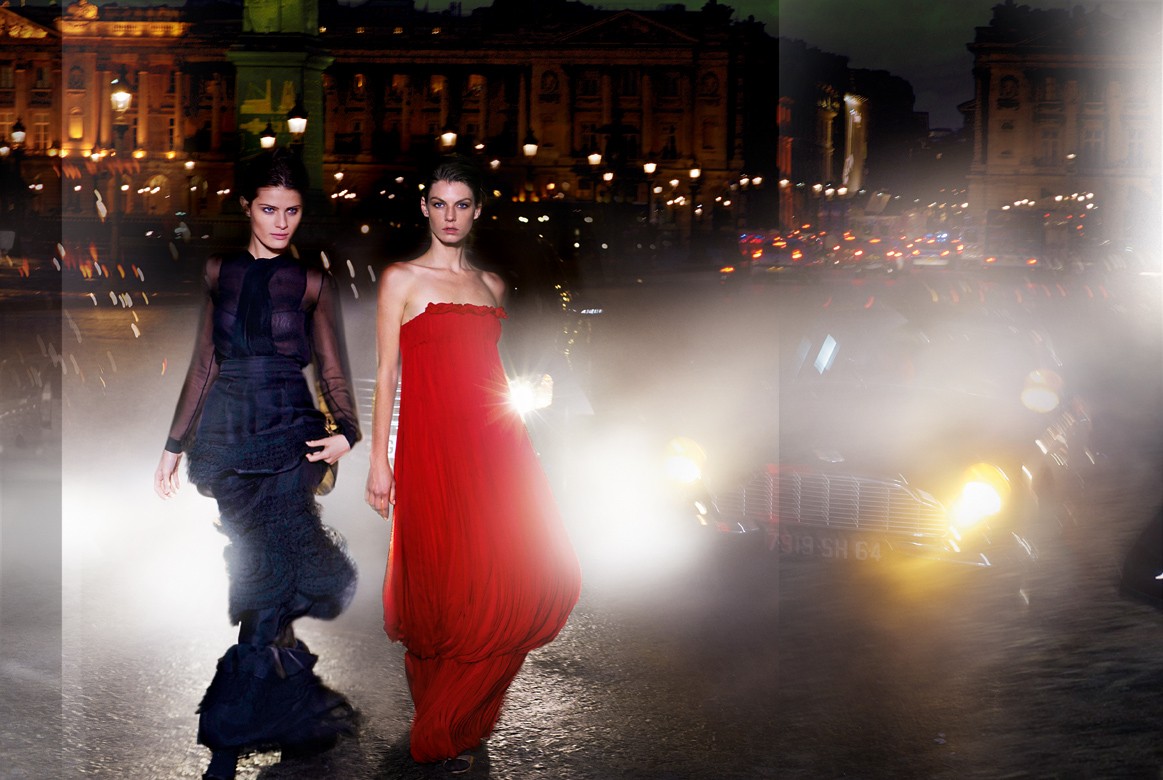 As Stern Art Director Tom Jacobi has said “other photographers change their style to the point of incongruity. Peter, in contrast, has remained true to his. He is the first photographer in the eleven-year history of Stern Fotografie to have three of these exclusive portfolios dedicated to his work”. Peter is also one of the only photographers with two Pirelli Calendarsto his name.
There have, of course, been dozens of exhibitions featuring Peter’s work around the world since his photography was included in the Victoria and Albert Museum’s Shots of Style in London in 1985. Peter Lindbergh “Smoking Women”, first shown in the Galérie Gilbert Brownstone in Paris in 1992, travelled to Tokyo’s Bunkamura Gallery in 1994 and the Schirn Kunsthalle in Frankfurt in 1996. The same year, prompted by the reaction to the 1994 show, the Bunkamura Museum of Art accorded Peter Lindbergh a retrospective, which broke the previous attendance records set by their Henri Lartigue and Leni Riefenstahl retrospectives.
In 1997, Berlin’s Hamburger Bahnhof, considered Germany’s most exciting new museum, staged a new show, Peter Lindbergh: Images of Women, which toured Hamburg, Milan, Rome and Vienna in 1998, followed by showings at the International Fashion Photography Festival in Japan in 1999 and 2000. Dr Irina Antonova brought Images of Women to the Pushkin Museum of Fine Arts in Moscow in 2002, making Peter the first photographer exhibited by the Pushkin. In her foreword to the catalogue, Dr Antonova wrote that “art critics and specialists often underrate fashion photography, attributing it to show business alone. However, Lindbergh is part of an important photography trend that could be called ‘classic post-modernism’”

As the New York Times pointed out in a review of MoMA’s 2004 show Fashioning Fiction in Fashion Photography since 1990, Peter was the first fashion photographer to incorporate storylines into his fashion editorials. His iconic Martian story with Helena Christensen for Italian Vogue in 1990 was the beginning of the narrative in fashion photography,leading to the substitution of the term fashion story for fashion editorial or fashion shoot in fashion magazine parlance. When Peter was put under contact to Harper’s Bazaar by Liz Tilberis in 1992, it cost the magazine’s publishers a seven-figure sum.
Peter Lindbergh has made a number of films, including the 1991 feature length documentary Models – The Film, shot in New York with the supermodels of the time.
Inner Voices (1999), a thirty-minute drama documentary examining self-expression in method acting, won the prize for Best Documentary at the International Festival of Cinema in Toronto in 2000.
In 2001, Lindbergh directed Pina Bausch – A Portrait, an experimental half-hour film on dance for Channel 4.
Shown off at Cannes in 2007, his latest film Everywhere at Once, co-directed with Holly Fisher, had its world première at the 2008 Tribeca Film Festival in New York. Narrated by Jeanne Moreau, this haunting, vaguely troubling film consists of refilmed Lindbergh stills, many of them unpublished, interwoven with excerpts from Tony Richardson’s Mademoiselle (1966). 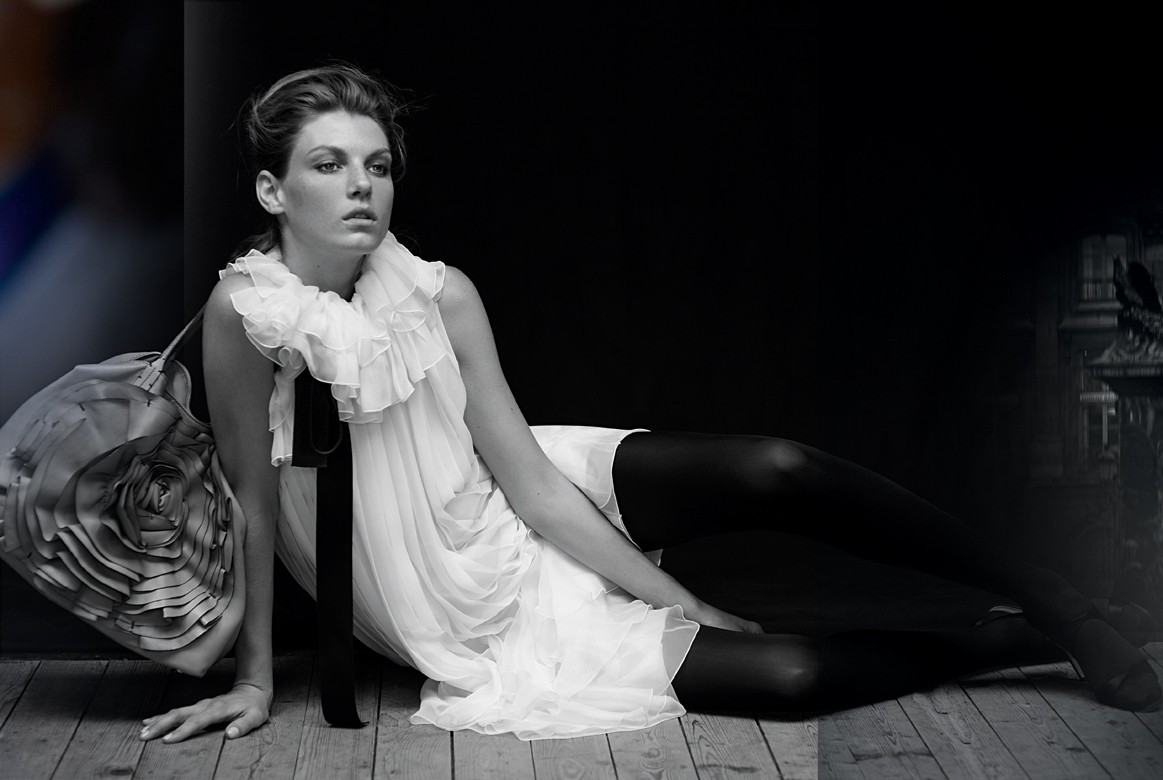 If some pundits feel that Everywhere at Once hints at a dark side to Lindbergh, the same could be said of some of his earlier work from the 1980s and 1990s, inspired not just by Fritz Lang’s Metropolis or Eisenstein’s Potemkin, or Lange’s Depression-era images, but by Lindbergh’s 1950s childhood across the Rhine from the foreboding Krupp steelworks in the industrial Ruhrland city of Duisburg.
Remarking upon the influence of this upbringing in Lindbergh’s work in his foreword to Lindbergh’s 1997 book Images of Women, the British photographic historian Martin Harrison wrote that “the opposition of the bare tree and the electricity pylon is revealed as a symbol of Lindbergh’s autobiography, a clue to the thread which runs through much of his work.”. Reminded of this, Lindbergh said: “It’s unconscious. I thought I was reflecting films like Metropolis but when people like Martin started writing about it, I thought: ‘Man! That’s where you’re coming from!’”
Yet in all of the analyses of Lindbergh’s work, one element is consistently overlooked: Lindbergh’s uncomplicated love of his art and his craft. The Art Director Donald Schneider, formerly at French Vogue and now at Stern, speaks for everyone who knows Peter when he says that: “Despite being one of the greatest photographers, despite his many successes, despite being such a big star…behind the camera Peter has the enthusiasm and gusto of a little boy discovering the world anew each time!”
Schneider also recalled a shoot in the Andalusian desert: “One night a chartered bus arrived and drove us to a Rolling Stones concert! Peter had bought tickets for all of us, a team of fifty people, just like that!” For my own part, I will never forget my impromptu, wine-fuelled singing contest with directors of a large Japanese cosmetics firm in a roadhouse in the south of France, with a grinning Lindbergh directing the proceedings. And then there was our two-hour motorcycle ride to a beach party in India but that’s another story…

To date, Peter’s books include Ten Women (1996), with a foreword by Karl Lagerfeld, Peter Lindbergh: Images of Women (1997), introduced by British photography historian Martin Harrison, Peter Lindbergh – Portfolio 1996-1999 (1999) and Stories (2002), with an introduction by Wim Wenders, who wrote that Peter “turns those goddesses into human beings/Without taking any of their aura away !…You look into his friendly eyes/and you might start to understand/how this untroubled and unimpressed gaze/will manage to penetrate and transform/whatever’s in front of them”. 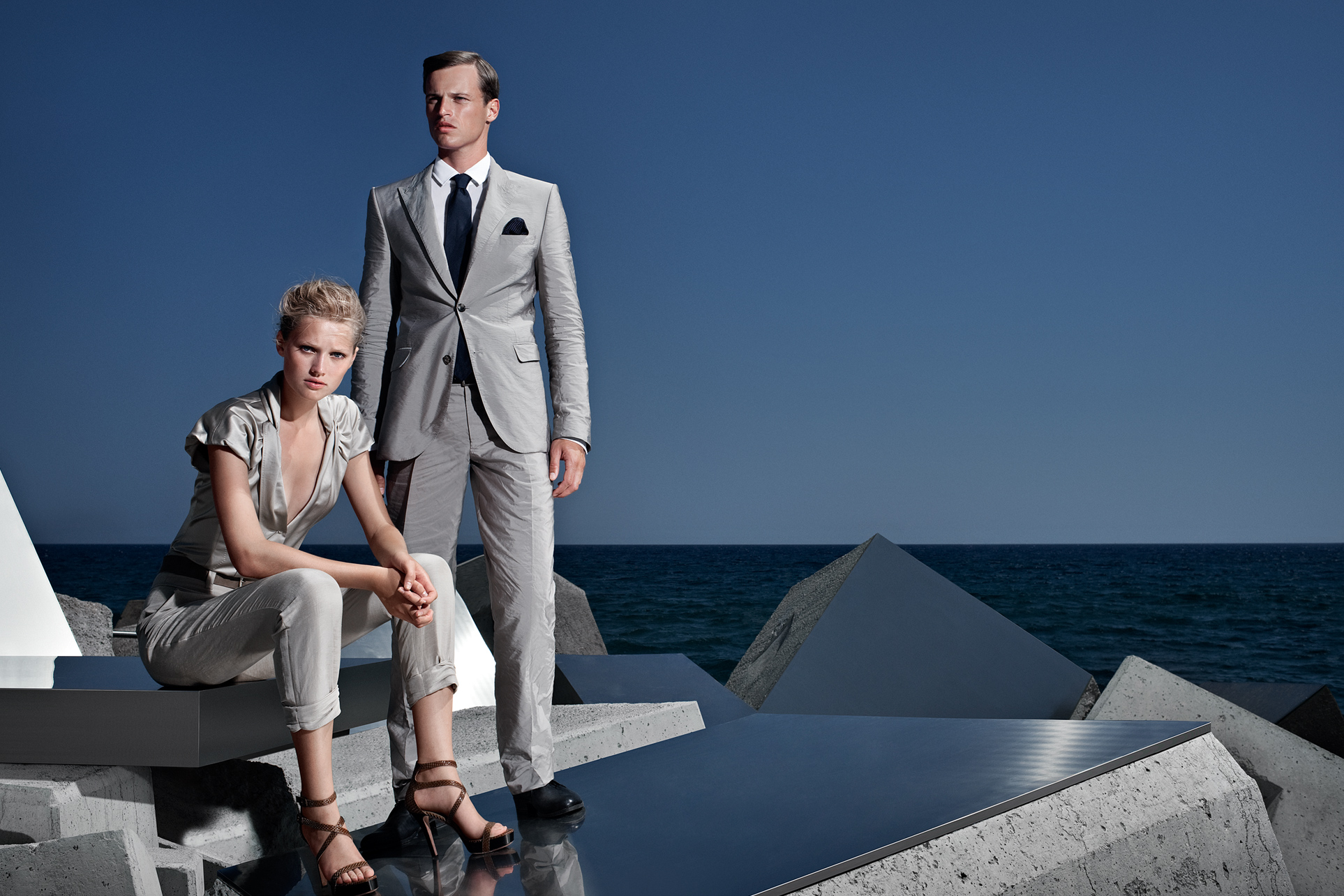