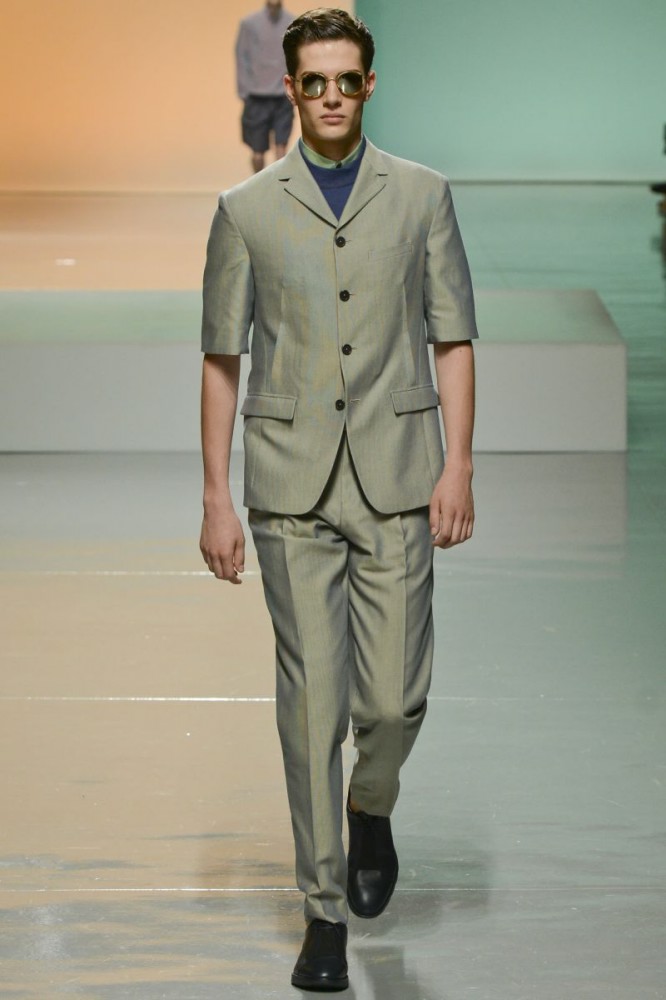 "Living good and being a good person", Paul Surridge is lucky enough to take up these two items. It is more fortunate that he looks quite handsome (it seems that being handsome has become a trend now for menswear designers) so that his name naturally becomes the person who attracts most public attention in Milan menswear week. In fact, what he is most widely known is that he is low-key.

Before joining Zegna Group, the young man who was born in Hertfordshire, England had quietly built up a lot of down-to-earth experience. When he studied in the Central Saint Martins College of Art in London, he became an assistant of Neil Barrett who was a menswear designer of Prada, where he helped Barrett create Prada’s first menswear series as well as establish the minimalist style which is praiseworthy later. 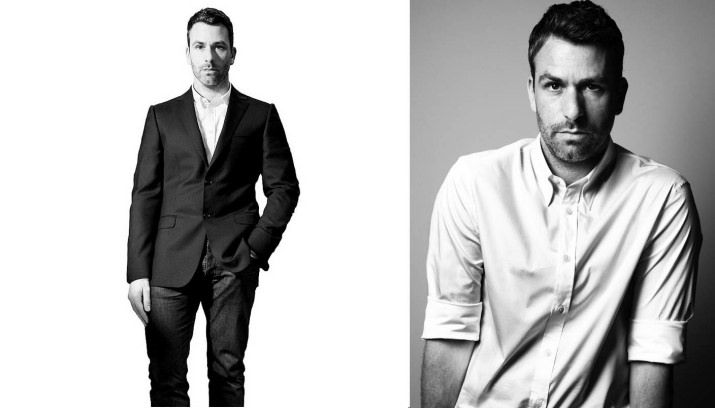 Of course, since then, his career has been influenced by the experience at that time. After getting the bachelor’s degrees of fashion design and marketing in 1997, Surridge was immediately employed by Ruffo which is an Italian top leather brand, and served as the designer and creative consultant of womenswear and menswear series.
After that, Jigsaw and Bailey Menswear sent an olive branch to him and invited him as a consultant. After Surridge moved to New York, he quickly became the design director of Calvin Klein menswear. The life in the United States made him lesson more simple and modern design elements. When he returned to Europe in early 2001 and continued to serve as a creative director for Ruffo, his elegant designs were hot sellers.  Burberry, in the younger process of brand, took note of the young genius. So Surridge joined Burberry and became a senior designer of menswear brand, being responsible for the hand-cut series and outerwear series. 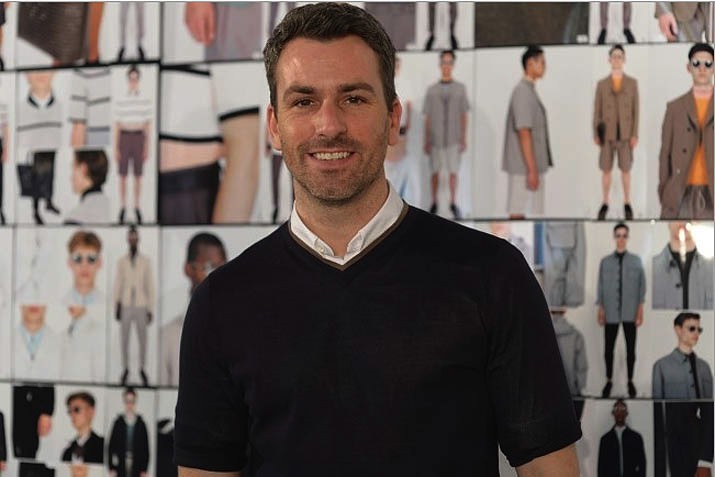 Four years later, he arrived at Jil Sander and became the right-hand man of Raf Simons as the chief designer of menswear. Most of the menswear of Jil Sander that achieved praises came from his hard creation.

It took another four years for him to finally come to Z Zegna to be the new creative director who has powers in his hands. (To some extent, he can finally define the future direction of the menswear.) After eight years of experience in Burberry and Jil Sander, Surridge projected all what he learned peremptorily in his debut in Z Zegna. 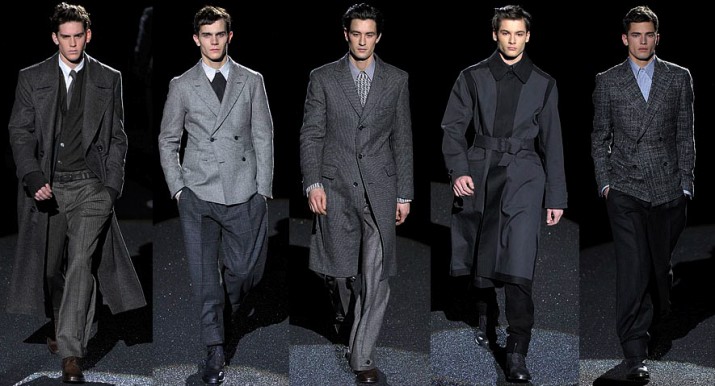 He has given the brand a new definition – a gentleman in a new era. "This is the new elegance for urban people after the sneakers and jeans were bombed." He constantly stressed in the interview. Tim Blanks thought that Surridge took Pierre Cardin as his model. And the brand also declared in the official press release: Surridge is a designer who focuses on modern fashion. Indeed, when the male models filed out, navy blue, dark gray, ebony, and khaki, electric blue, orange and emerald green glowed jewel-like brilliance as well as showed a strong geometric vision effect under the highlights of the modern silhouette. 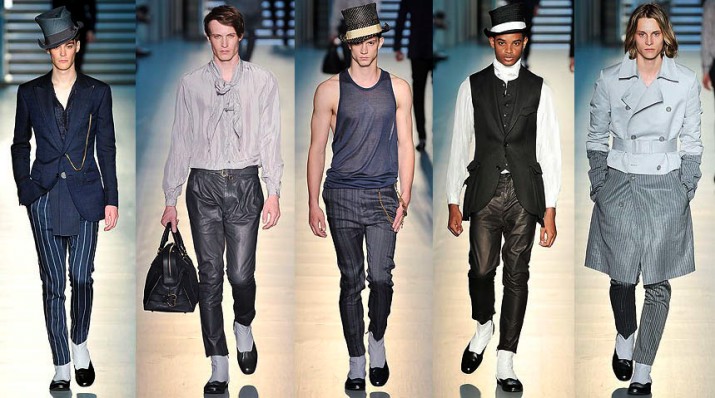 He also added more avant-garde elements into fabrics. For example, he added Techno knitting or 3D grid into the expensive tweed and cashmere, showing a gelatinous and copper touch sense. The inside big pocket which is carefully designed for storing the wireless Internet equipment and the eye-catching iPad handbag reflect more that this designer is a true modern technology enthusiast. At the same time, he did not forget the strengths and traditions of the brand. He delved into the early sewing history of Zegna as well as made full use of the rich fabrics and traditional tailoring process that the brand owned. Those double-breasted jackets and narrow-leg cuffed pants almost emulated the features of the clothing in Edward period while the four-buckle jacket is one of the representatives of Zegna clothing history. 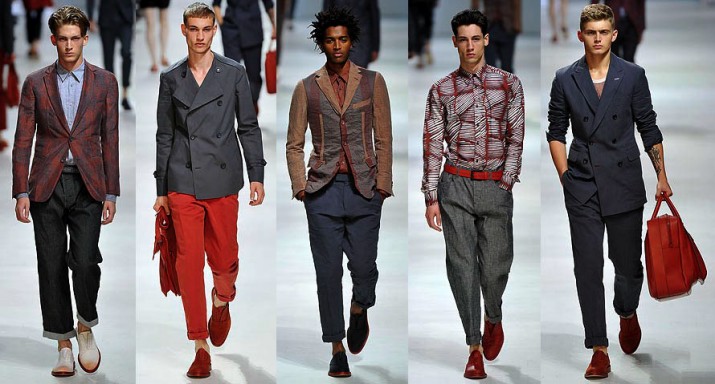 It is also interesting that it is the mix of modern and tradition that makes him such a unique designer. And his low-key temperament began from his drawing, plate making and design for decades of years while his resume is visible in Linkedin. There are rare designers who can use this trendy SNS technology. His enthusiasm for electronic technology is just like that for the top menswear so that in this fashion show, he pioneered to invite Anna Dello Russo to have the cooperation program of Beyond The Fashion Show Stage: audience can see the backstage preparation process and the fashion publishing of the show as well as the designer’s exclusive interview at the first time on Facebook through Anna’s iPhone lens. 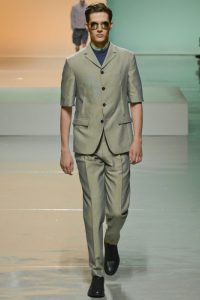