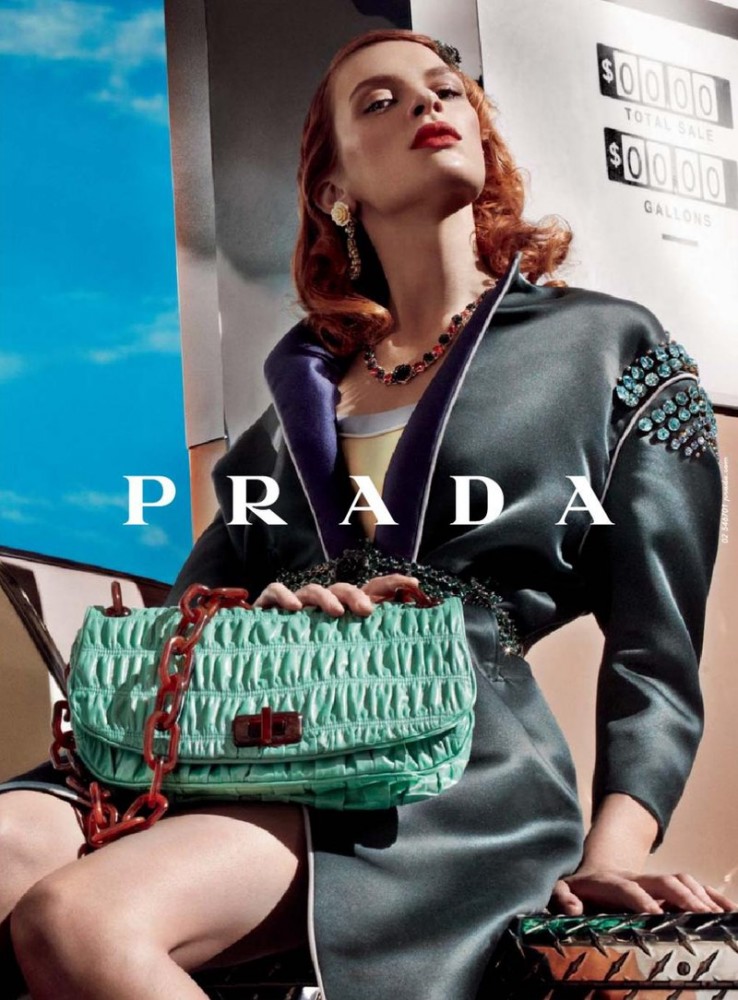 Miuccia Prada is an Italian fashion designer (Prada, Miu Miu) and entrepreneur. She also has a Ph.D. in political science.

According to Forbes.com’s The World’s Richest People 2001: "She and her husband, Patrizio Bertelli, took over the family-owned luxury goods manufacturer in 1978. Since then, they’ve turned it into a fashion powerhouse, acquiring Jil Sander, Helmut Lang and shoemaker Church & Co."

Prada is a collector of contemporary art and owns several artworks by Young British Artists (YBAs) including Damien Hirst. In 2002, she opened a contemporary art space, Fondazione Prada, which exhibits work by various international artists. Prada announced the winner of the 2010 Turner Prize.

Miuccia Prada Bianchi was born in Milan on 10 May 1949, the youngest granddaughter of Mario Prada, founder of the company. At fifteen, Prada—whose strict Catholic mother mandated she wear only no-nonsense brown shoes—was dreaming of “pink shoes, red shoes, pink dresses. Anything with color. Exciting underwear,” she will later tell The New Yorker. She began to rebel. “I would wear Saint Laurent, Pierre Cardin, and then some strange English clothes, all in a weird way. I always had to be first. That was the most important thing.”

After graduating with a PhD in political science in 1970, Miuccia attended Teatro Piccolo to study and perform as a mime for five years. She was known to be a member of the Communist party and a champion for women’s rights during the seventies in Milan. In 1978 she entered into her family’s business of manufacturing luxury leather bags, a company established by her grandfather in 1913. 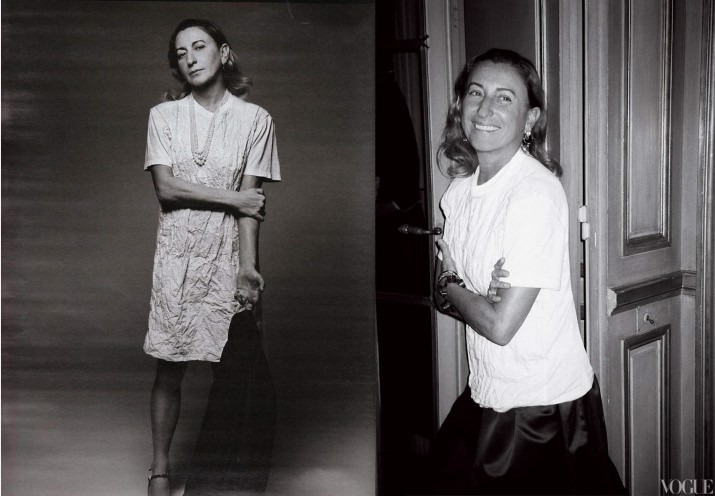 The now-prominent Communist party member was reluctant to enter a career in fashion. “Being so involved in the women’s movement then, and in everything that it was trying to accomplish, I thought that making bags or shoes or dresses was the worst way I could spend my time,” she told London’s Evening Standard. “Let’s face it, fashion is not really very important. It’s a bit silly and frivolous. I mean it’s only skirts and a few bags.” She goes on to add: “I never actually decided to become a designer. Eventually I found that I was one.”

Around the same time Miuccia met her now husband and business partner, Patrizio Bertelli. He offered his expert advice. “I was searching for my direction,” she told Forbes. “When I met Patrizio, Prada started in a more serious way.” He became her mentor, and she granted him an exclusive to manufacture her bags. Soon, the two became romantically involved and move in together, and Prada later appointed Bertelli CEO of her company.

In 1979 Prada introduced women’s footwear. In 1985, Miuccia had her first hit when she designed a line of black, finely woven nylon handbags that instantly became a hit. By 1989, Miuccia designed and introduced her first women’s ready-to-wear collection that was critically acclaimed; men’s wear followed in 1995. 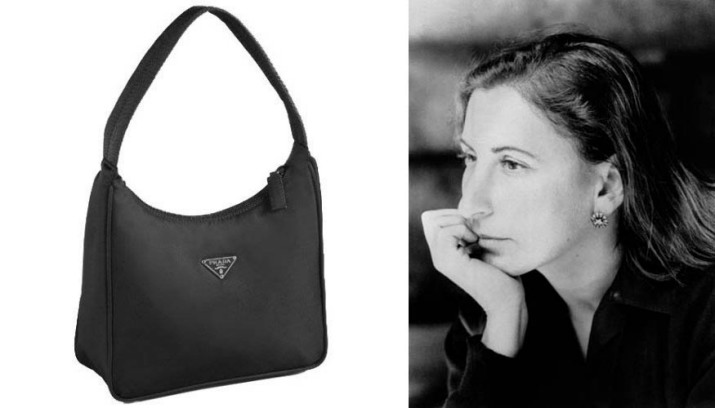 Miu Miu was introduced in 1992 as a less expensive women’s wear line that was inspired by Miuccia’s personal wardrobe and nickname. Miuccia was honored with the prestigious Council of Fashion Designers of American International Award for accessories in 1993. The same year a men’s line, Collezione Uomo, was introduced. 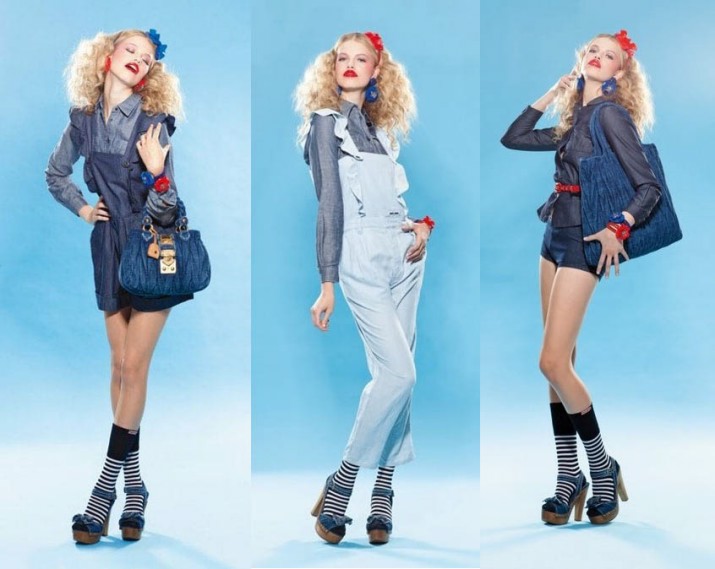 The following year she showed her collections in both New York’s and London’s fashion week, although she had already become a staple of Milan’s fashion week. She received the CFDA’s International Award.

Miuccia’s husband, Patrizio Bertelli, is still the predominant business force in the company who is responsible for the commercial side of products and Prada’s retail strategy. In 1996 enormous Prada flagship store opened on New York’s Madison Avenue with much fanfare. In 1997 Prada Linea Rossa launched and the following year introduced Prada Sport, a sportswear line. Won award for Menswear Designer of the Year. 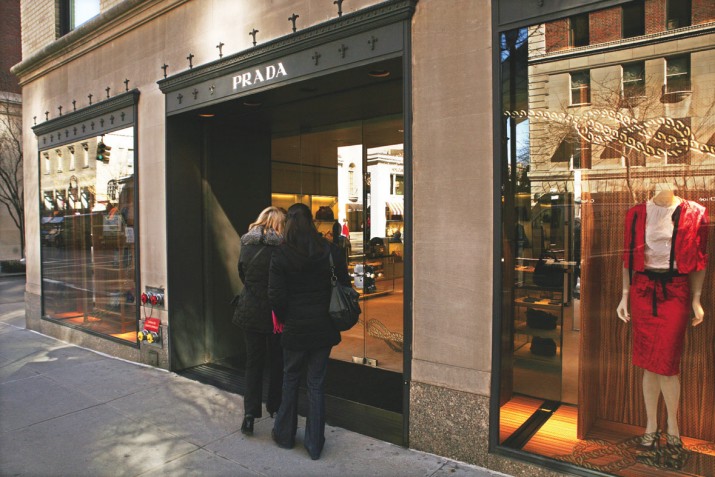 In 2001 Miuccia was named to Forbes’s list of the World’s Richest People.

In 2003 she received the André Leon Talley award for Lifetime Achievement from the Savannah College of Art and Design in Georgia. Next year she received the CFDA’s International Award. “I’m really happy and really moved,” she says. “And I will work hard to get maybe another one.” 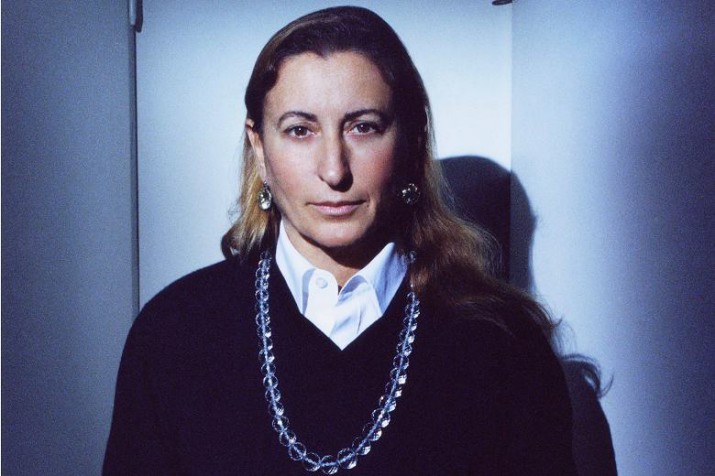 In 2005 Miuccia named in Time’s annual list of the 100 most influential people in the world. In 2009 the designer celebrated an upcoming comprehensive book on her brand, Prada: Creativity, Modernity, Innovation.

In 2010 she  designed costumes for Pierre Audi’s production of Giuseppe Verdi’s Attila, premiering at the Metropolitan Opera in New York. Also lent her costuming talents to Lady Gaga, fashioning an 18th-century-hoop-like get-up for the singer-provocateur’s Monster Ball tour. The American Academy in Rome designated Miuccia Prada as this year’s McKim Medal Laureate for her contributions to the arts.

The design house has grown into an international conglomerate that added labels such as Fendi, Helmut Lang, Jill Sander, and Azzedine Alaia to its portfolio of brands. Miuccia Prada is known for her understated, minimalist, classic, cool, and comfortable luxury. The company has expanded into leather goods, shoes, fragrances, and apparel for both men and women. Prada currently has about 250 stores in 65 countries. 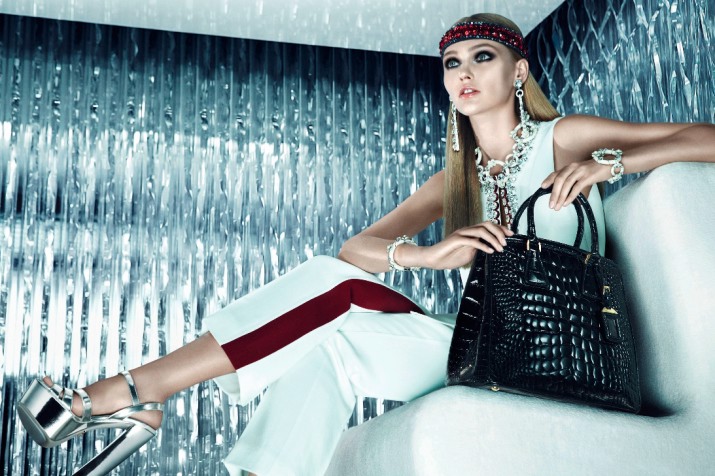 “I love clothes. Maybe I can say I don’t love fashion, but I love clothes completely.” She designs what she wants to wear, and what she wants to wear just happens to have incredible currency. For the past decade or more, the Prada brand has most been identified with ladylike dressing, and it’s this air of womanliness—drawn from the designer’s class and her past—that is the common grain of sand from which Miuccia has created, in myriad and unexpected iterations, many a beautiful pearl. 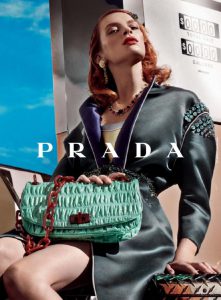