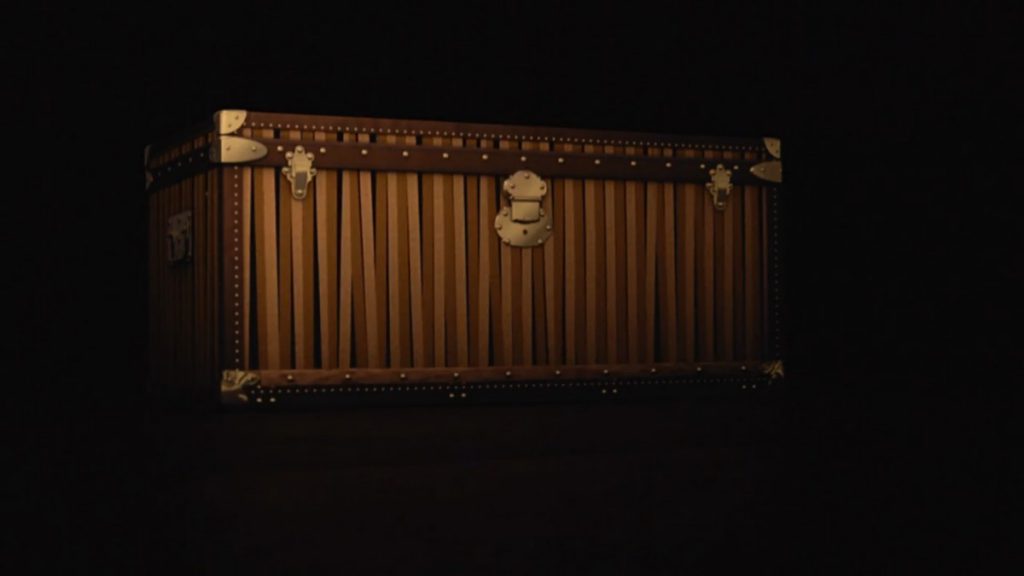 Designer, entrepreneur Louis Vuitton was born on August 4, 1821, in Anchay, a small hamlet in eastern France’s mountainous, heavily wooded Jura region. Descended from a long-established working-class family, Vuitton’s ancestors were joiners, carpenters, farmers and milliners. His father, Xavier Vuitton, was a farmer, and his mother, Coronne Gaillard, was a milliner.

Vuitton’s mother passed away when he was only 10 years old, and his father soon remarried. As legend has it, Vuitton’s new stepmother was as severe and wicked as any fairy-tale Cinderella villain. A stubborn and headstrong child, antagonized by his stepmother and bored by the provincial life in Anchay, Vuitton resolved to run away for the bustling capital of Paris.

On the first day of tolerable weather in the spring of 1835, at the age of 13, Vuitton left home alone and on foot, bound for Paris. He traveled for more than two years, taking odd jobs to feed himself along the way and staying wherever he could find shelter, as he walked the 292-mile trek from his native Anchay to Paris. He arrived in 1837, at the age of 16, to a capital city in the thick of an industrial revolution that had produced a litany of contradictions: awe-inspiring grandeur and abject poverty, rapid growth and devastating epidemics.

The teenage Vuitton was taken in as an apprentice in the workshop of a successful box-maker and packer named Monsieur Marechal. In 19th-century Europe, box-making and packing was a highly respectable and urbane craft. A box-maker and packer custom-made all boxes to fit the goods they stored and personally loaded and unloaded the boxes. It took Vuitton only a few years to stake out a reputation amongst Paris’s fashionable class as one of the city’s premier practitioners of his new craft.

Napoleon Bonaparte’s wife hired Vuitton as her personal box-maker and packer and charged him with "packing the most beautiful clothes in an exquisite way." She provided a gateway for Vuitton to a class of elite and royal clientele who would seek his services for the duration of his life. For Vuitton, 1854 was a year full of change and transformation. It was in that year that Vuitton met a 17-year-old beauty named Clemence-Emilie Parriaux. His great-grandson, Henry-Louis Vuitton, later recounted, "In the blink of an eye he exchanged the cloth frock and hobnailed shoes of a worker for the courting outfit of the day.

The transformation was spectacular, but it required all the know-how of the store’s department manager, since Louis’ shoulders were much larger than those of Parisian bureaucrats." Vuitton and Parriaux married that spring, on April 22, 1854. A few months after his marriage, Vuitton left Monsieur Marechal’s shop and opened his own box-making and packing workshop in Paris. The sign outside the shop read: "Securely packs the most fragile objects. Specializing in packing fashions." 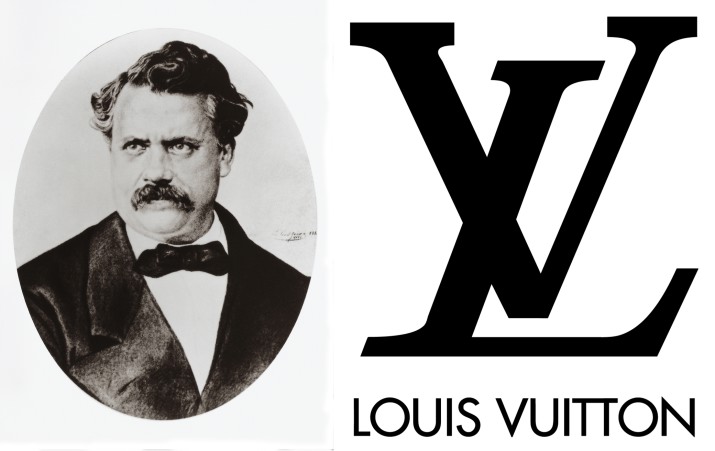 In 1858, four years after opening his own shop, Vuitton debuted an entirely new trunk. Instead of leather, it was made of a gray canvas that was lighter, more durable, and more impervious to water and odors. More importantly, unlike all previous trunks, which were dome-shaped, Vuitton’s trunks were rectangular-making them stackable and far more convenient for shipping via new means of transport like the railroad and steamship. Most commentators consider Vuitton’s trunk the birth of modern luggage.

The trunks proved an immediate commercial success, and advances in transportation and the expansion of travel placed an increasing demand for Vuitton’s trunks. In 1859, to fulfill the requests placed for his luggage, he expanded into a larger workshop in Asnieres, a village outside Paris. Business was booming, and Vuitton received personal orders not only from French royalty but also from Isma’il Pasha, the Khedive of Egypt.

In 1870, however, Vuitton’s business was interrupted by the outbreak of the Franco-Prussian War and the subsequent siege of Paris, which gave way to a bloody civil war that destroyed the French Empire. When the siege finally ended on January 28, 1871, Vuitton returned to Asnieres to find the village in ruins, his staff dispersed, his equipment stolen and his shop destroyed.

Showing the same stubborn, can-do spirit he displayed by walking almost 300 miles alone at the age of 13, Vuitton immediately devoted himself to the restoration of his business. Within months he had built a new shop at a new address, 1 Rue Scribe. Along with the new address also came a new focus on luxury. Located in the heart of the new Paris, Rue Scribe was home to the prestigious Jockey Club and had a decidedly more aristocratic feel than Vuitton’s previous location in Asnieres. 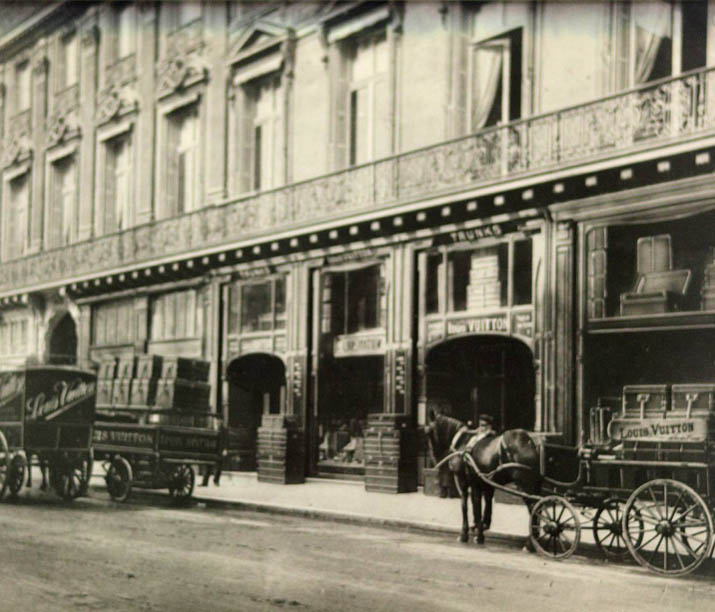 In 1872, Vuitton introduced a new trunk design featuring beige canvas and red stripes. The simple, yet luxurious, new design appealed to Paris’s new elite and marked the beginning of the Louis Vuitton label’s modern incarnation as a luxury brand.

For the next 20 years, Vuitton continued to operate out of 1 Rue Scribe, innovating high-quality, luxury luggage, until he died on February 27, 1892, at the age of 70. But the Louis Vuitton line would not die with its eponymous founder. Under his son Georges, who created the company’s famous LV monogram and future generations of Vuittons, the Louis Vuitton brand would grow into the world-renowned luxury leather and lifestyle brand it remains today. 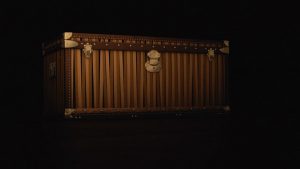