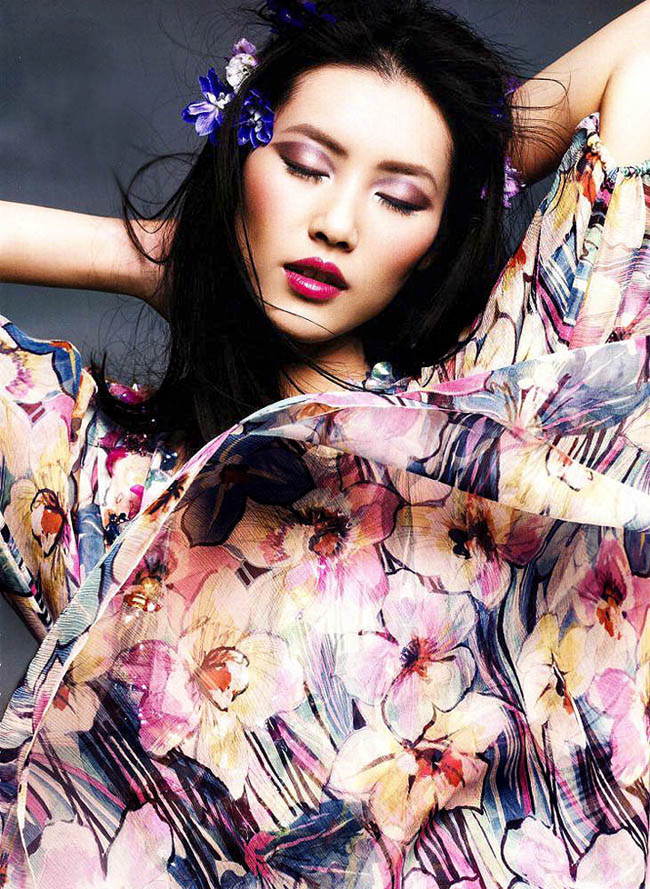 Liu Wen is a sensation from Yongzhou, a city in Hunan province in central southern China, and is China’s biggest fashion star, a global ambassador for Est&eacute;e Lauder, and in the vanguard of an Asian invasion of catwalks in Europe and America.

In pictures: Liu Wen’s career on and off the catwalk
In September 2009 Liu broke with the stereotype and became the first Chinese girl to model for the Victoria’s Secret show in New York. Last April she became the first Chinese face – or &quot;global ambassador&quot; as they like to call them – of Est&eacute;e Lauder. The company is estimated to sell $300 million worth of face creams and cosmetics a year in China, the company’s fastest growing market and the largest outside the US. Liu’s latest ad campaign is for Est&eacute;e Lauder’s Every Woman Can Be Beautiful, which focuses on different skin tones. It features Liu alongside the Puerto Rican Joan Smalls and the French model Constance Jablonski.

In pictures: Asian models starring on the catwalk
Liu has an amazing, infectious smile that results in deep dimples in her cheeks. She is very unstarry – professional, straightforward and keen to chat. She talks quickly and surprisingly fluently. When she arrived in New York from Beijing a year ago after signing her Est&eacute;e Lauder contract, Liu spoke little English. ‘I couldn’t talk with the people, only yes and no, and I felt so stupid. I couldn’t understand anything.’ But she has been a fast learner, picking up English from photographers, stylists, friends and watching TV and films, particularly Twilight. 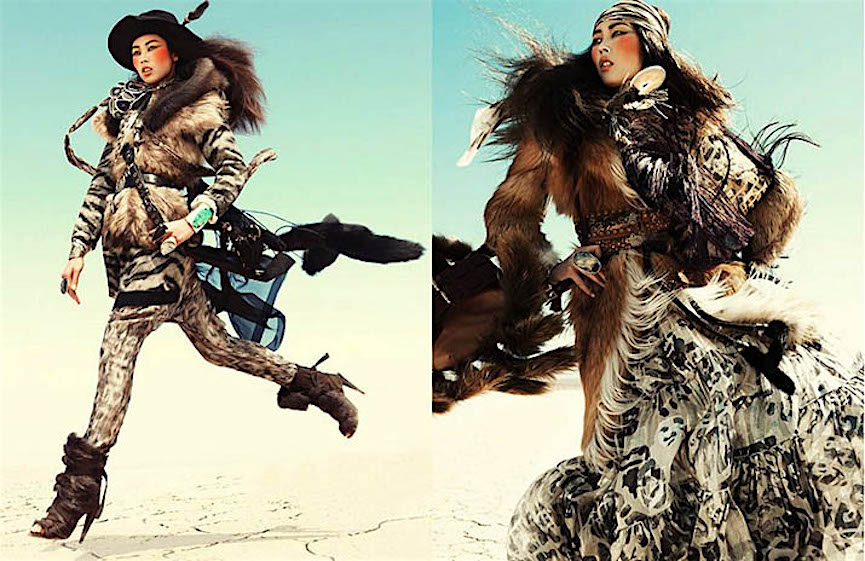 Leading China’s voguish revolution
‘I like my job so I have a good energy,’ she says in a surprisingly deep voice. To keep her energy levels up, she drinks coffee, eats ice cream, rests and drinks lots of water. ‘Today my skin is a little bit dry so I use Est&eacute;e Lauder Advanced Night Serum – it’s good!’

By the end of the season Liu will have done all the big shows, from Ralph Lauren to Dolce & Gabbana, Chanel and Louis Vuitton). ‘Every time it’s Chinese New Year, it’s New York Fashion Week,’ she says. ‘It’s sad, but you are working. This time I was in LA shooting with Est&eacute;e Lauder. They are always very nice and said, &quot;Happy Chinese New Year&quot;. The year before it was in fashion week in New York and nobody cared that it was Chinese New Year, so you feel sad you can’t be together with your family. But it was good with Est&eacute;e Lauder – the team is like a family.’ Liu, who is a dragon according to Chinese astrology, has not been home for the past three new year celebrations. But she is determinedly upbeat.

‘Fashion is a good job for a young girl. I like clothes – I like to play with clothes. I like DIY; I like to make outfit. A model’s style is very important. I learn a lot.’ And despite the fact that she comes from a country where fashion was non-existent not much more than a decade ago (Giorgio Armani will be celebrating 10 years in China with an event in Beijing on May 28), Liu has a strong style of her own – despite her long hair she is a tomboy, preferring men’s shirts, boyish blazers and DM boots.

Liu’s mother and her 69-year-old grandmother are bemused by her new-found penchant for vintage clothing. ‘I love London style – vintage stores. I have lots of vintage clothes. London is very chic and more individual. In China there is no vintage. My mum is not happy – she says it’s so old. I spent a lot of money on vintage jackets, shoes, jewellery; I like all the styles from the 60s, 70s and 50s, the older the better. Mum says you shouldn’t spend money on that, just buy new stuff. Before, I didn’t know what fashion was. I grew up in a small town – no fashion jobs, no fashion. I didn’t know anything.’

Liu describes her childhood in Yongzhou as normal. ‘My hometown is a very boring city. There isn’t a lot of industry – there are a lot of trees. It’s not like Beijing where the sky is always dark. In my city the sky is blue and the sun shines. My favourite city is Miami,’ she adds, grinning. ‘It’s very fresh and the beach is sunny.’ At school, she studied hard, did her homework, learnt Chinese dancing and played ping pong. ‘I was boring. I liked to listen to music, I would go to the museum and I watched a lot of movies. I was lazy, I just wanted to stay home with my parents and finish school.’ 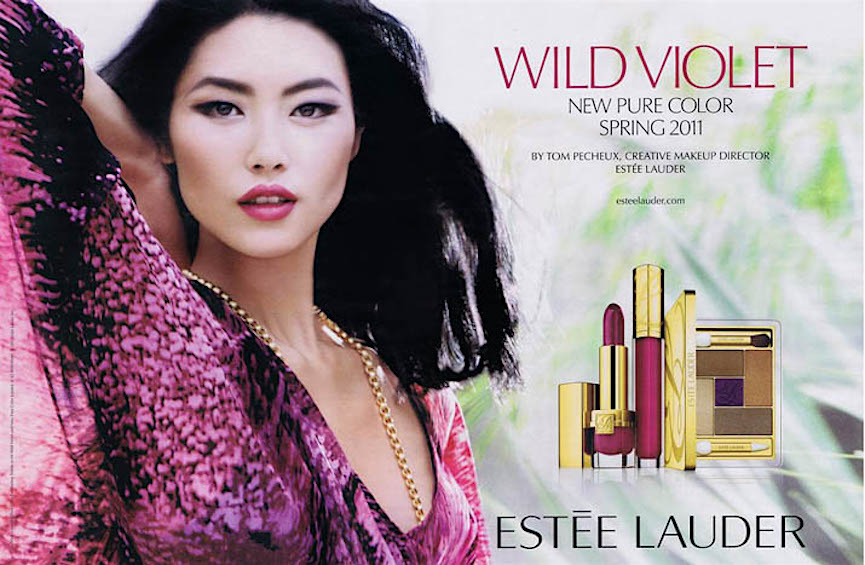 The only thing that was slightly unusual for Liu Wen was her height. By junior school, she was 5ft 6in (1.68m). ‘My parents were tall; my mum is 1.68, my father [a businessman] is 1.78 [5ft 10in], so the same as me now. My grandfather was 1.80, so taller. Now we are only one child and we eat really good food so the body has changed.’ She was the tallest in her school. ‘My back hunched because I was so tall’. That was part of the reason that her mother encouraged her to enter a modelling competition in 2005. ‘My mum wanted me to be confident and stop slouching so I did the contest. I really just wanted to win the computer [the first prize]. I was at school so I couldn’t afford an expensive computer. I was so happy when I won – it meant I could be connected with the world. It was a Lemon laptop. Not Apple. Not a lot of people use Apple in China. Lemon is made in China.’ These days, Liu uses an Apple. As she says, it’s ‘more pretty’. 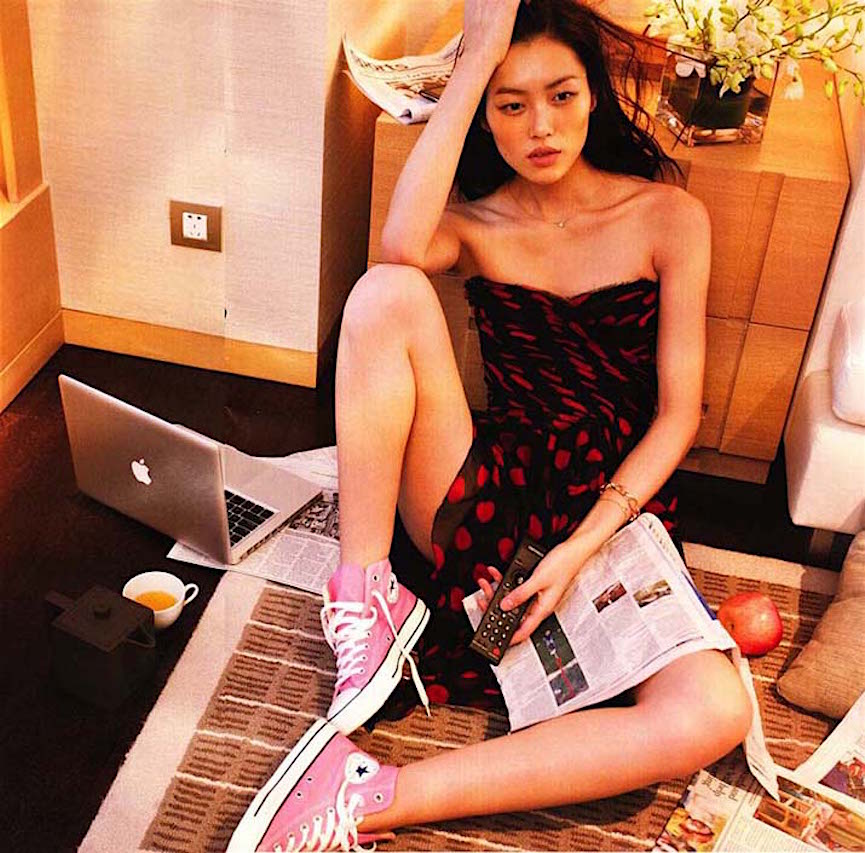 After she won the contest, Liu Wen moved to Beijing to try to become a model. ‘I was shooting a lot for local campaigns. I didn’t do a lot of runway, the catwalk for me was very difficult – I couldn’t walk in the high heels.’ Liu’s arrival in Beijing coincided with the launch of Vogue China in September 2005, a magazine that is growing at a phenomenal rate and changing the way the Chinese see fashion. It is now the second-biggest advertising revenue earner for Cond&eacute; Nast after American Vogue. Kathy Phillips, the international beauty director for Cond&eacute; Nast Asia, remembers that before Vogue Chinese fashion magazines were more like shopping catalogues. That is changing, with more avant-garde fashion magazines such as Numero, which launched last September with two covers, each with Liu Wen styled in different ways.

Liu Wen is very famous, without doubt the most successful model in China, especially since she got the Est&eacute;e Lauder contract. A television documentary was made about Liu, with film of her family in Hunan. It wasn’t until they saw her in the ads for Est&eacute;e Lauder, Gap and Calvin Klein, she tells me, that her parents really understood what she did. (Her mother, already a fan of Est&eacute;e Lauder skin products, now enjoys regular parcels of products sent to her by Liu.)

Phillips is watching with interest as the Chinese find more confidence and individuality in the way they dress. Liu, with her quirky, boyish style, her easy smile, darker skin tone and unconventional attitude, is a great role model. But the Chinese don’t consider Liu to be a classical Chinese beauty. ‘What they like is big eyes, small face, pale skin towards white and like a doll – they don’t like a jaw,’ Phillips says. They are obsessed by white skin and they love blond hair – this traditional idea of beauty. 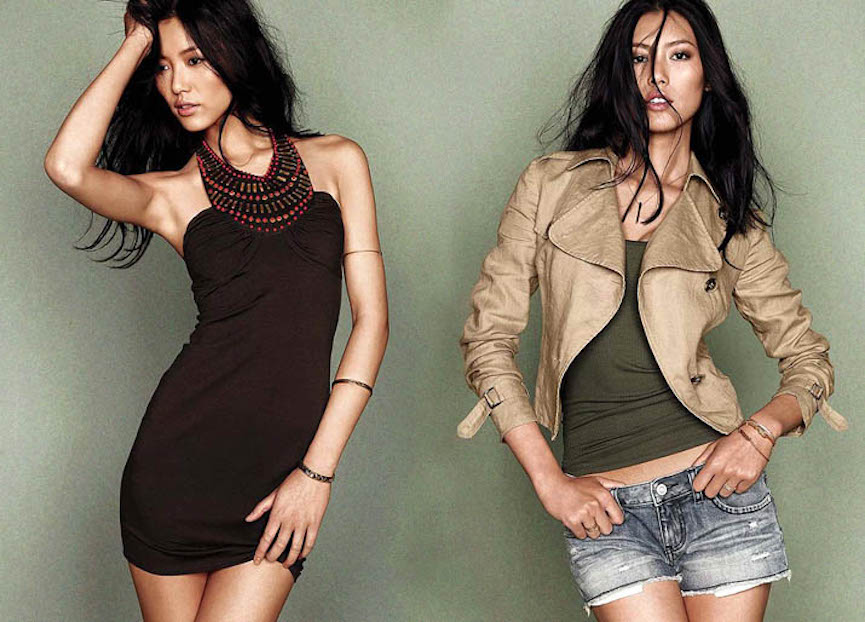 Josh Olins, a British photographer, who has shot Liu Wen several times for a variety of magazines and ad campaigns including the current issue of i-D , British Vogue and ads for Benetton, says, ‘Liu Wen is pretty fantastic.’ Their working relationship seems to involve a lot of him making her laugh, and it is her happy, carefree spirit that he captures brilliantly, seen particularly in the i-D cover. ‘She is very professional. She was the pioneer of this wave of Chinese models. Since Liu, there have been five or six coming through.’

Liu is the first member of her family ever to travel outside China, but since moving to New York a year ago, her life has changed completely. ‘I didn’t know how to take the subway to get to castings and fittings. The agency has interns who took me on the subway, taught me how to do the delivery food, everything. You don’t have a lot of time to think, you just go to work.’ Her booker took her to see Hair on Broadway – the first time she had ever been to the theatre. ‘I couldn’t believe it,’ she says. ‘People were naked! In China, no people do that. I was so shocked and he said it’s all right, you are in New York, enjoy that.’ 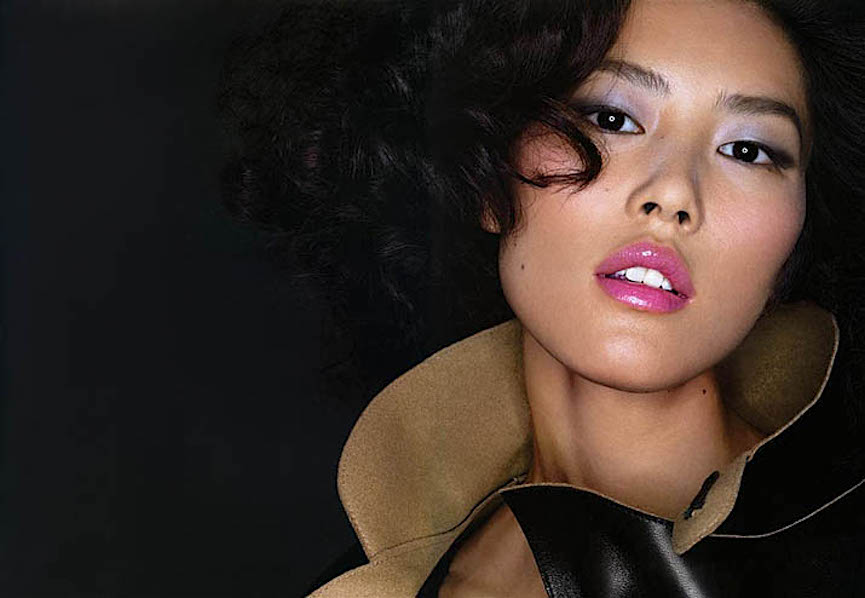 She recently bought her parents a new apartment, and her mother, who is retired, now has time to learn to cook (her grandmother and her father did most of the cooking at home before). ‘In China you only have one child so I don’t want them to work too hard and want them to rest. Modeling can make them a lot of money and make them a more comfortable life.’ She misses her family but says they ‘Baidu’ her (the Chinese equivalent of Googling) to see what she is doing and they Skype a lot.

Liu still can’t believe how her life has turned out. ‘I’m living my dream,’ she says. ‘I feel so happy and so excited I can’t believe it. For Chinese girls it’s very hard to work internationally. I didn’t think before that an Asian girl could do a beauty campaign. I do the campaign for the world, not only for Asia.’

Is her face everywhere in China? Absolutely, although Liu quickly adds that models are not as big a deal in China as actresses. But she gets stopped on the subway in New York and on the Metro in Paris, where her Est&eacute;e Lauder ads are in Galeries Lafayette (according to Leonard Lauder, interviewed in Women’s Wear Daily recently, 45 per cent of the cosmetics turnover at Galeries Lafayette in Paris is thanks to the Chinese abroad – part of what he calls the ‘Chinese wave’). People stop her and ask if she is the model Liu Wen, and ask to take her photograph. ‘It’s a very big change in my life,’ she says. ‘It has changed everything.’ 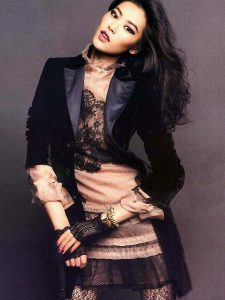 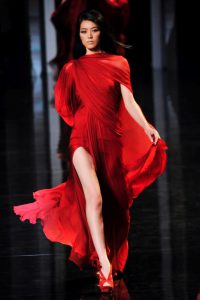 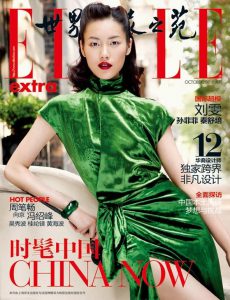 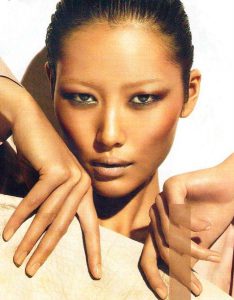 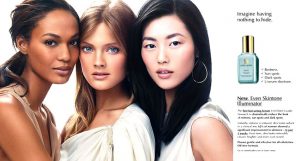 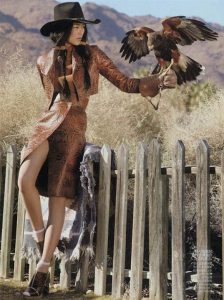 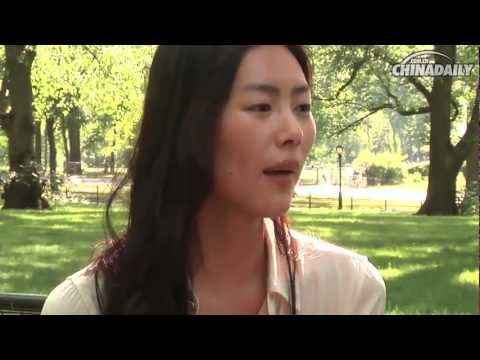 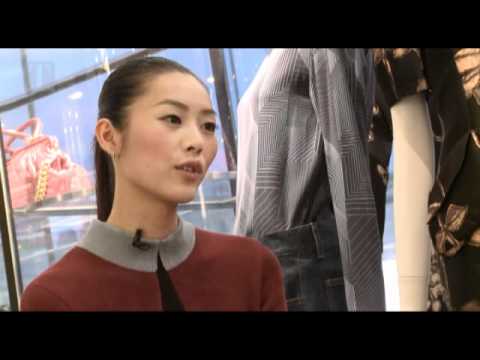 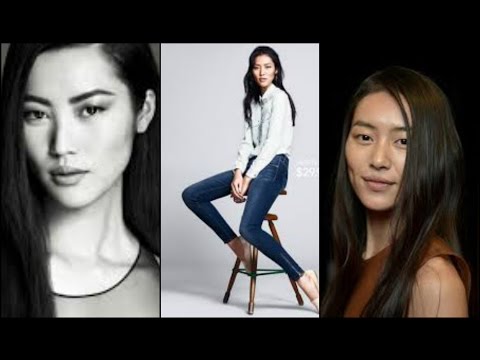 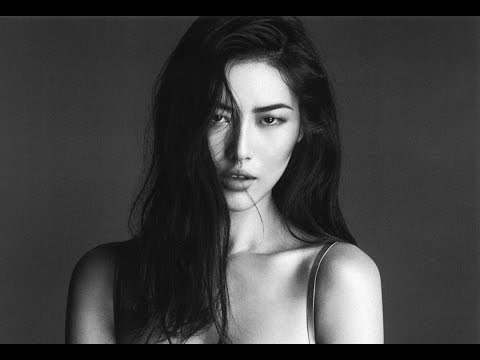 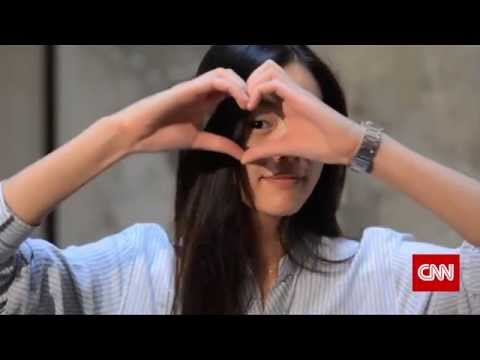