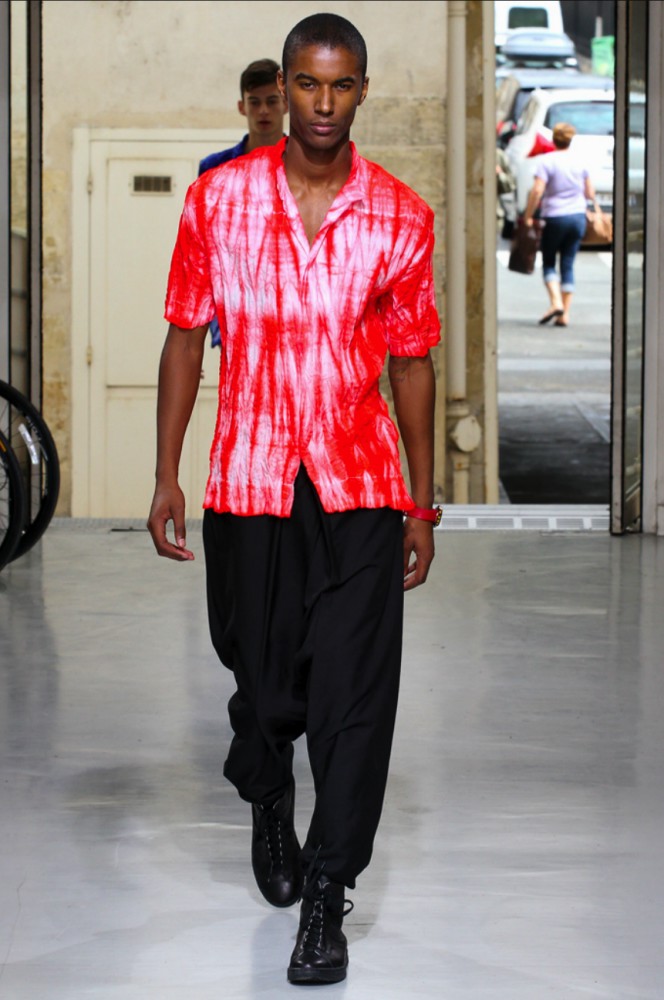 Issey Miyake is the most well-known Japanese designer in the world, having successfully merged East and West in his designs. Issey Miyake was born in Hiroshima, Japan on 22 April 1938.

He studied at the Tama Art University in Tokyo during which time he assembled his first fashion collection, which he named "The Poem of Material and Stone" In 1964 he graduated from the University of Tokyo. In 1965 he moved to Paris to study design at the Chambre Syndicale de la Couture Parisienne. In 1966 he left to work as an assistant designer at Guy Laroche. He also worked in the studio of another great couturier Hubert de Givenchy.  However, he felt out of step with the posed formality of the haute couture approach to dressing which was all that Paris could offer to women at that time.

However, revolution was in the air, and such designers as Courreges and Cardin were designing modern clothes. In 1969 Issey Miyake left for New York. He worked as a designer for Geoffrey Beene, producing ready-to-wear clothes and enjoying the atmosphere of the city. He was also refining his ideas about dress and the function of fashion. Was the result, was his theory of peeling away to the limit, throwing away all the inhibiting ideas about dress and starting again from the beginning.

In 1970 Miyake returned to Tokyo to make his ideas concrete. In 1971 he founded the Issey Miyake Design Studio in Tokyo. He also opened a boutique at Bloomingdales in New York. During the 70’s while still based in Tokyo, Miyake began to show his collections twice a year in Paris and they rapidly became fashion shows which no fashion addict could afford to miss

In 1976 he presented 12 black girls from America, striking black Amazons showing his designs in Osaka which were seen by 15,000.people. In 1977 he mounted "Fly with Issey Miyake" in Tokyo which was seen by 22,000 people. In the late 80s, he began to experiment with new methods of pleating that would allow both flexibility of movement for the wearer as well as ease of care and production. This eventually resulted in a new technique called garment pleating and in 1993’s in which the garments are cut and sewn first, then sandwiched between layers of paper and fed into a heat press, where they are pleated. The fabric’s ‘memory’ holds the pleats and when the garments are liberated from their paper cocoon, they are ready-to wear. He did the costume for Ballett Frankfurt with pleats in a piece named ‘the Loss of Small Detail " William Forsythe and also work on ballet " Garden in the setting ". 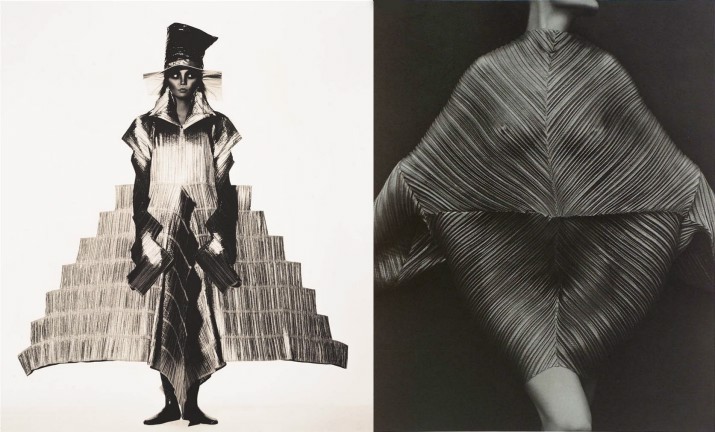 In 1995 several designers, joined in a project to illustrate characters from films. Issey Miyake has drawn POCOHONTAS the red Indian heroine of the Disney cartoon film. In 1994 and 1999, Miyake turned over the design of the men’s and women’s collections respectively, to his associate, Naoki Takizawa, so that he could return to research full-time. In 2007, Naoki Takizawa opened his own brand, supported by the Issey Miyake Group and was replaced, as a Creative Director of the House of Issey Miyake, by Dai Fujiwara. 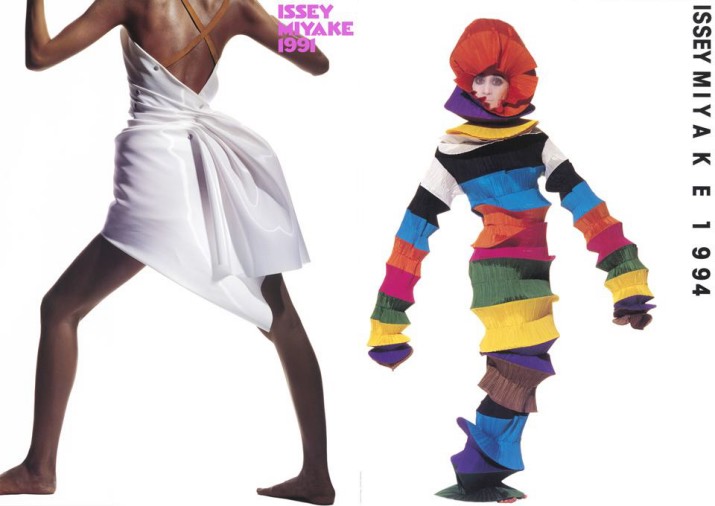 In Fall 1998, the Cartier Foundation in Paris dedicated a large exhibition to him in a space designed by the architect Jean Nouvel. Miyake himself chose the title: Making Things. On this occasion, Philippe Trétiack wrote for Elle magazine: "He has never cease to search, interrogate, scrutinize his materials and he has drawn various replies and signs in order to design what might be the clothing of the future.

A tailor of the wind, a poet of delicacy, an architect of a feather-light armor for the next millennium, Miyake, year after year, is becoming the master, the guru of the most fluid modernity." For the Spring-Summer 2000 collection, significantly called A-Poc (A Piece of Cloth), a single piece of cloth became a long or short skirt, a T-"shirt, bikini, socks, and gloves.

In 2000, after 30 years at the forefront of design, Issey Miyake announced that he would be handing over the reins of ready-to-wear to his right-hand man Naoki Takizawa  who has been with him since 1989. For Spring 2000 Takizawa gave the Miyake main line new direction, with cropped jackets and fitted shift dresses in simple pared-down silhouettes and fluid shapes.

Issey Miyake is not hanging up his scissors yet though. He says "I want to go back to basics". He will focus on the A-POC range pushing the concept that real clothes can be made from a single piece of cloth. His A-POC shop opened in Spring 2000 in London. He has opened a huge futuristic new store in Tokyo, Japan, in the same building wherein he had founded his company in 1971. Miyake sells approximately 200,000 garments every year and more than 100 factories in Japan work for him.

Miyake’s skill with fabric is rooted in his knowledge of traditional Japanese fabrics and fabric-production techniques. The ascendancy of denim in the sixties and seventies turned his attention to Japanese workwear fabrics: ticking stripe, heavy cottons, quilting. These he incorporated into his work both in their original form and in wonderfully elaborated forms, waffle textures, heavy coarse weaves, rich seersucker effects, wrinkled, crinkled, primitive pleating and occasionally smocked. Combined with Miyake’s sophisticated colour sense, the effect of all this sensuous texture was completely fresh. 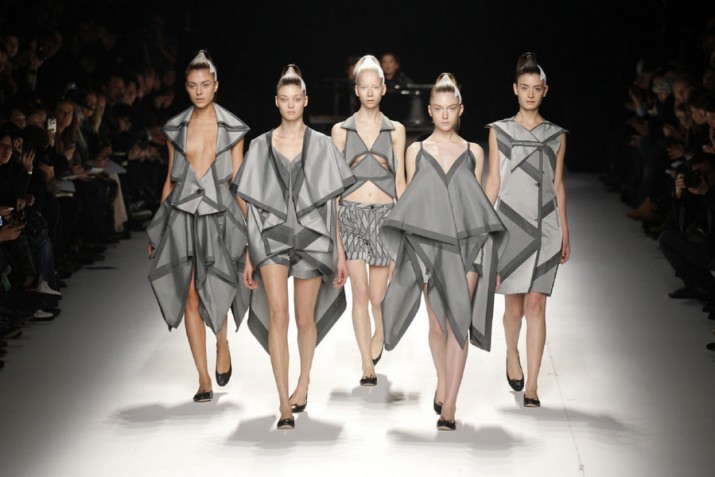 Textured fabrics when employed by other designers, tended to be conventionally rich – velvet, plain, panne or printed, brocade, damask, corduroy or applique work, embroidery or lace, nubbled or hairy tweed. Even when used in fresh unexpected ways other designers cannot compete with the fabrics Miyake has developed, which respond well to being intricately cut, seamed, darted and fitted. This is consistent with his vision. He says " I like to work in the spirit of the Kimono, between the body and the fabric there exists only an approximate contact." He does not use the kimono itself as many Western designers do, to add a touch of exoticism. He merely borrows its  attributes of ease, adaptability and respect for the fabric and the patterns and shapes in space with it can create when the body moves.

If he sounds serious about his design philosophy, we he is. But he also has a rich sense of humour which contributes substantially to his famous charm. He loves to make extravagant statements when he sends his models down the runway in shiny fibreglass breastplates, or perky nipples or polished wickerwork torso cages shaped like Samurai armour. His use of wrapping and tying techniques for the fastening of his clothes is also based on Japanese tradition. The kimono has no closure and it closed by tying the obi around the waist. 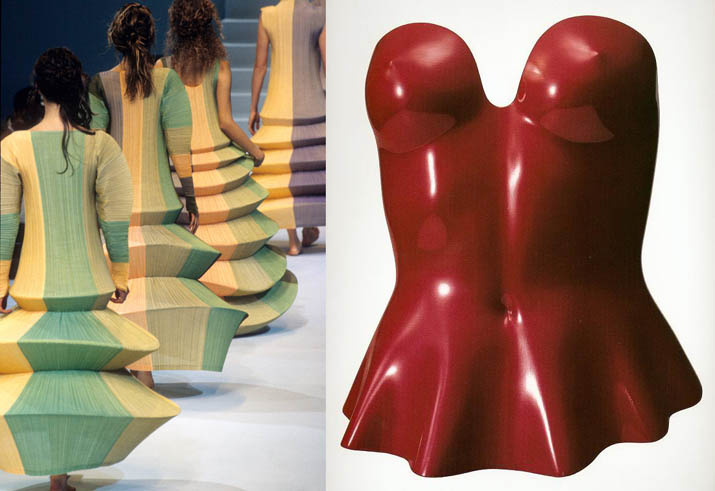 He makes clothes like 18th century Buddhist priests, where patchwork rectangles were meant to suggest the humility of tatters, although they were actually stitched from the finest of antique brocades. Miyake refines and passes on the inherently Japanese vision. His loose, even formless clothes mock the perfect-toned "me decade" body, he makes fashion retrospective. 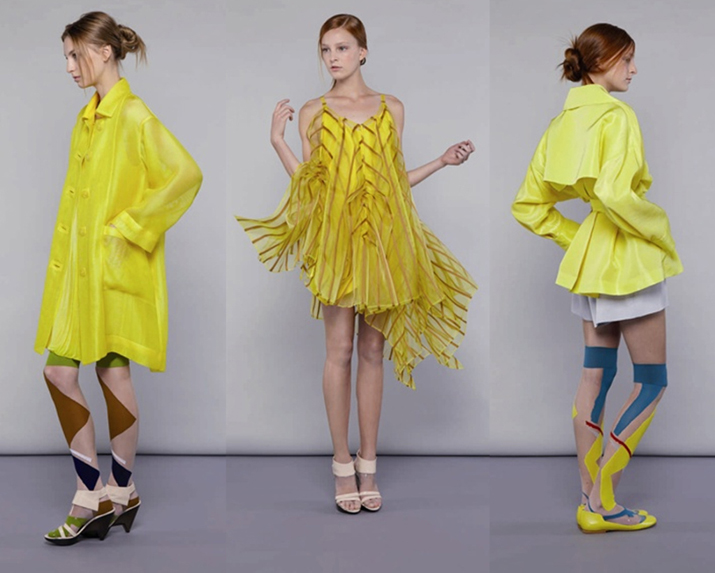 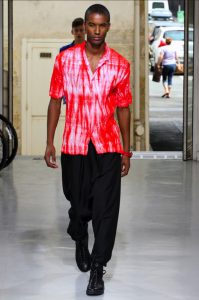