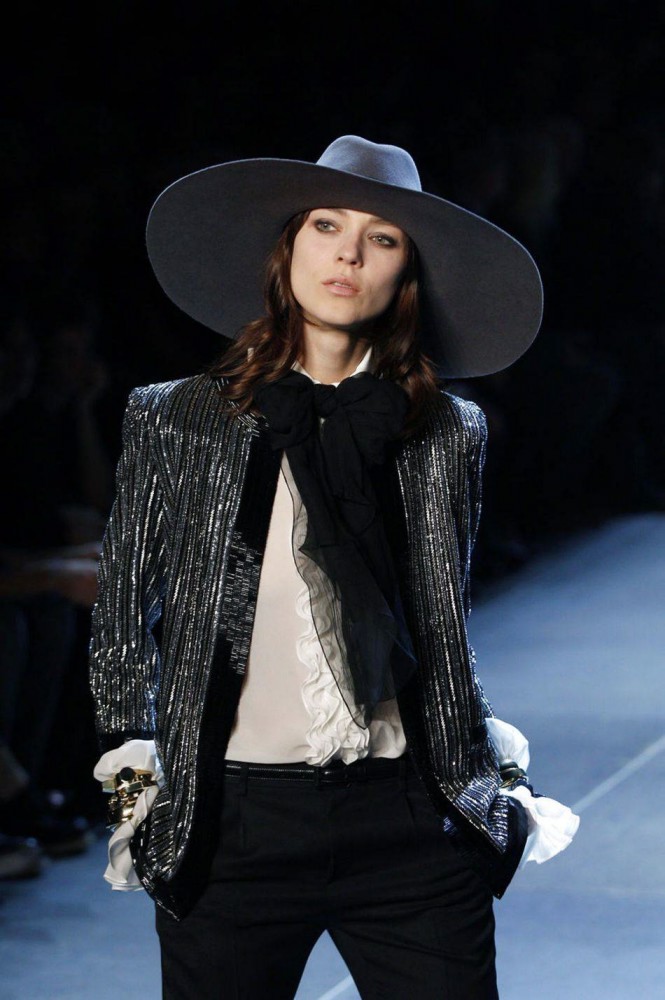 Born to an Italian mother and a Tunisian father in July 5 1968 in the 19th arrondissement of Paris. At 11, he discovered photography, received his first camera and learned black and white darkroom printing. At 16, without fashion in mind, Slimane started making his own clothes. He studied Art History at the Ecole du Louvre and completed a tailor apprenticeship at a men’s designer house. Early in his career, he visited the offices of Le Monde, as he wished to become a journalist and reporter.

From 1992 to 1995, Slimane assisted fashion consultant Jean-Jacques Picart on the centenary of the project "monogram canvas" of Louis Vuitton. The project invited seven fashion designers – Azzedine Alaia, Helmut Lang, Sybilla, Manolo Blahnik, Isaac Mizrahi, Romeo Gigli, and Vivienne Westwood – to reinterpret the monogram canvas in celebration of its longevity.  In 1996, Pierre Bergé installed Slimane in the position of ready-to-wear director of mens collections at Yves Saint Laurent and later he became artistic director. 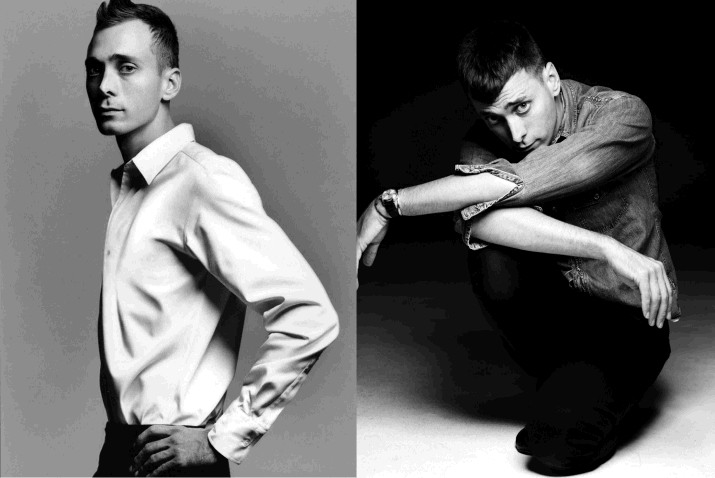 After the Black Tie collection for autumn-winter 2000-2001, which foreshadowed the advent of Slimane’s silhouette, and the debuts of "skinny", he chose to leave YSL, declined the offer of creative directorship at Jil Sander, and accepted the position of creative director for menswear at Christian Dior.  In June 2001, he headed up the launch of Dior Homme’s first fragrance under his creative control – named Higher. He designed the packaging and worked with Richard Avedon on the accompanying advertising campaign. In April 2002, Hedi Slimane was the first menswear designer to receive the CFDA award for International Designer. David Bowie, whom Hedi Slimane dressed for his tours, presented the award. 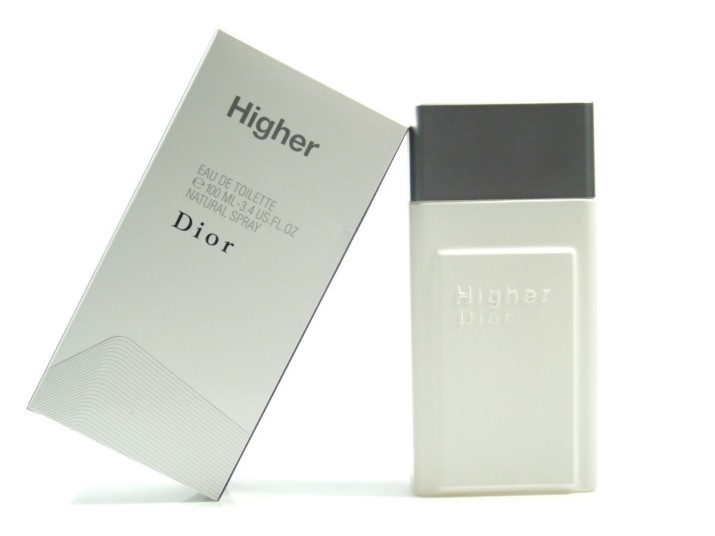 Thanks in part to Slimane, Dior’s couture business, which includes ready-to-wear and accessories, increased by 41 percent in 2002. Brad Pitt had Slimane create his wedding suit. Although he never designed a womenswear collection, he dressed female celebrities like Madonna and Nicole Kidman during his tenure at Dior. He furthermore created stagewear for groups such as The Libertines, Daft Punk, Franz Ferdinand and The Kills and artists such as Mick Jagger, Beck, Jack White. 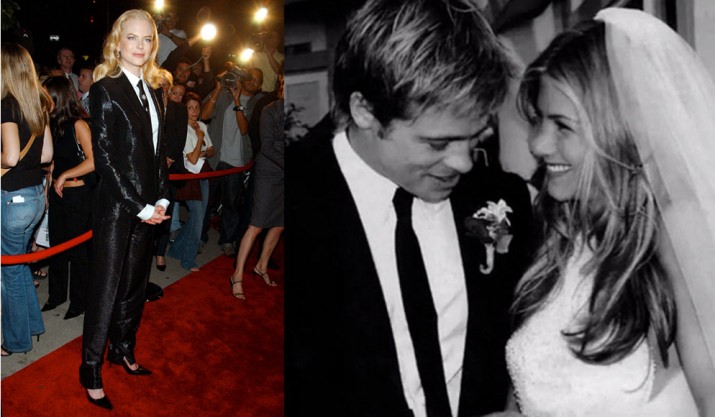 Slimane commissioned original soundtracks for his runway shows for Dior Homme, created by artists such as Beck, Readymade FC & bands such as Phoenix, The Rakes, Razorlight. Slimane became known for redefining the male silhouette, widely recreated in fashion and advertising (fashion and fragrances).

In July 2007, Slimane did not renew his contract at Dior Homme. The fashion house proposed to fund Slimane’s own label, but the discussions failed and the designer declined. Slimane had written on his website that he did not want to lose control of his name, and management of his own brand. He returned to fashion and portrait photography. 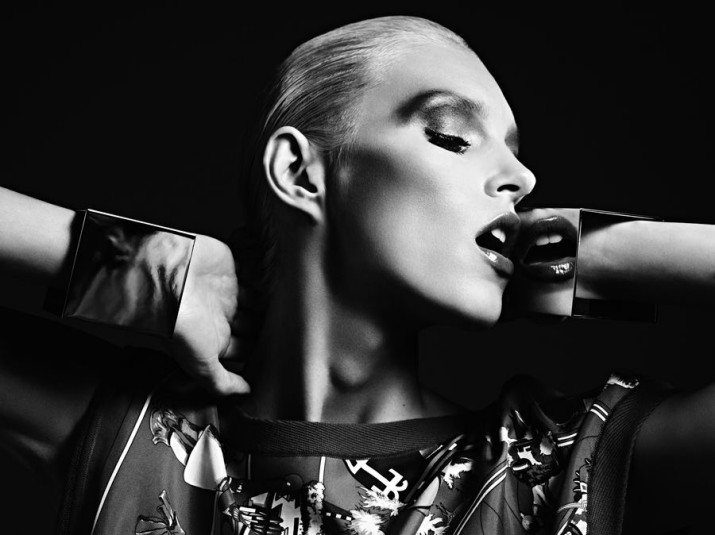 In March 2011, following John Galliano’s dismissal from Dior, Slimane was linked with the job of new Dior creative director. In March 2012, Yves Saint Laurent and its parent company, PPR, officially stated that Slimane would replace Stefano Pilati as creative director at Yves Saint Laurent (changing the label’s name in June 2012 to Saint Laurent Paris), after the departure of the latter, who held said position for almost eight years. He based himself in his creative studio in Los Angeles, rather than the brand’s Parisian headquarters. 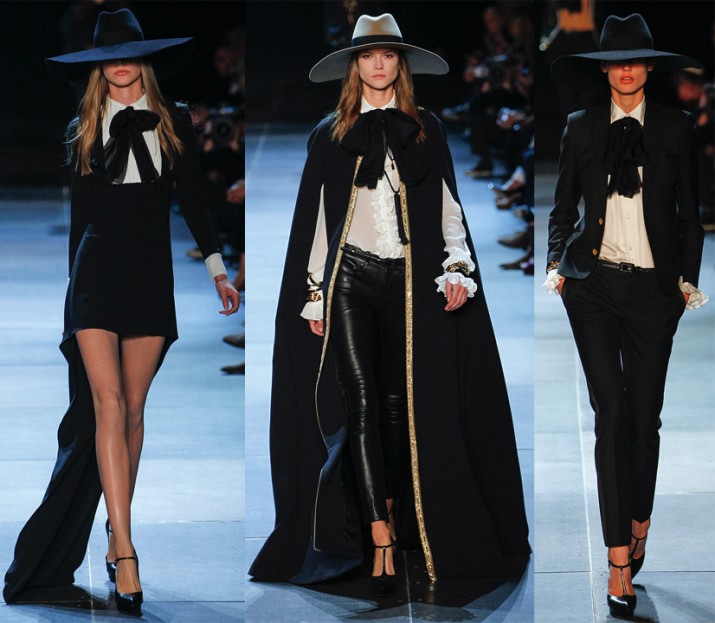 A timid and reticent perfectionist, he avoids the limelight, though his graciousness toward the press and his admirers has earned him universal respect.  As Hedi puts it, "The less I explain, the better I do. Honors are important for others. What interests me, is doing things."

Immediately after leaving Yves Saint Laurent, Slimane moved to Berlin, where – upon the invitation by curator Klaus Biesenbach – he took up a residency at the Kunst-Werke Institute for Contemporary Art between 2000 and 2002. Berlin, a selection of black and white photographs published by Editions 7L/Steidl with Karl Lagerfeld and Steidl in 2002, was Slimanes first book documenting the Berlin scene. Stage, published by Steidl in 2004, is his second book published on the rock revival and the 2.0 generation. Also in 2004, Slimane created the album cover for the band Phoenix’s album Alphabetical. 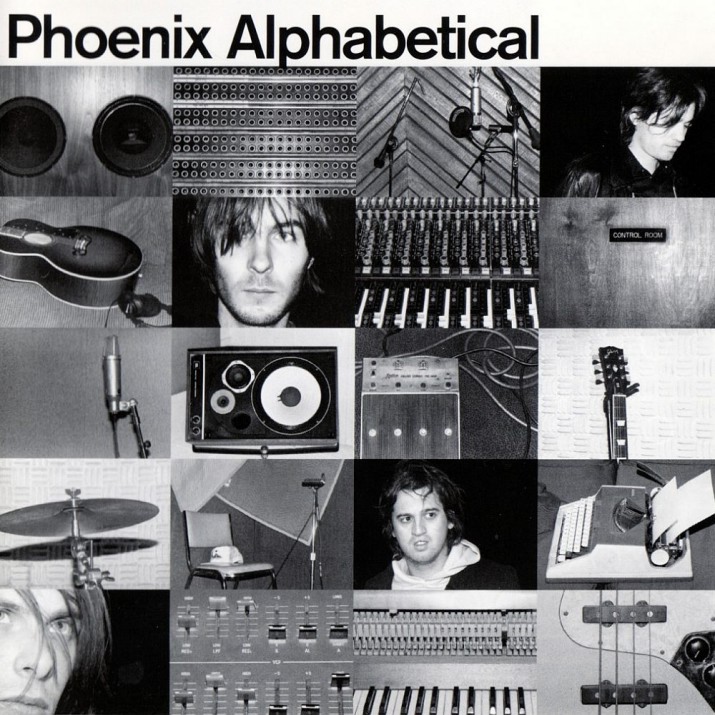 In May 2006, Hedi Slimane created the photographic blog Hedi Slimane Diary. Slimane created his Rock Diary, beginning in 2004 in collaboration with the British journalist from NME, Alex Needham. In addition, he shot spreads for magazines including French Vogue, VMAN, and Purple. 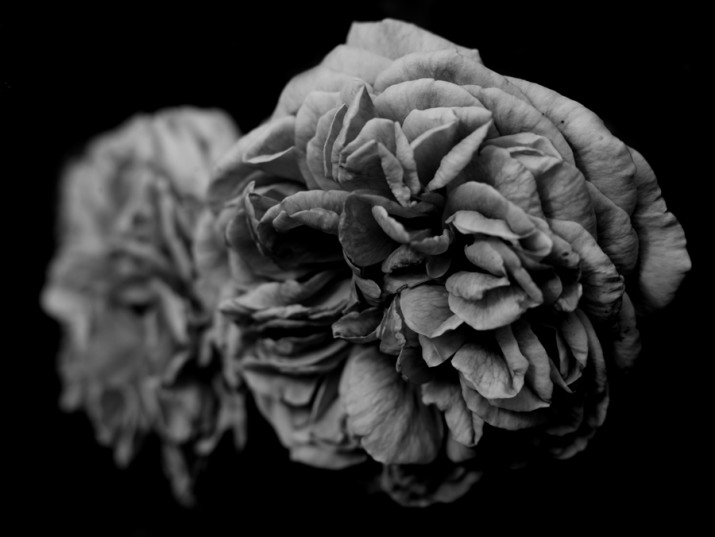 When Slimane left for America and based himself in Los Angeles in 2007, California became the subject of many of his images and later the subject of several exhibitions. In 2011, he curated "Myths and Legends of Los Angeles" a group show of Californian artists, including John Baldessari, Ed Ruscha, Chris Burden, Sterling Ruby, Mark Hagen, and Patrick Hill at Almine Rech Gallery in Paris and Brussels.

His own work was shown in 2011 at the MOCA, where Slimane presented a photographic installation that showcased an archive of images from his California period. The exhibition, titled "California Song", was created in a kinematics way, accompanied by a soundtrack by the musical group No Age. No Age performed on the opening night on November 11, 2011, drawing a record attendance of over 2,000 people for the MOCA. The opening night performance became the subject of a documentary by Slimane and Commonwealth. Christopher Owens, the singer of Girls, was the lead figure of "California Song". Digital slide show billboards were seen in the streets of Los Angeles showcasing the MOCA exhibition. 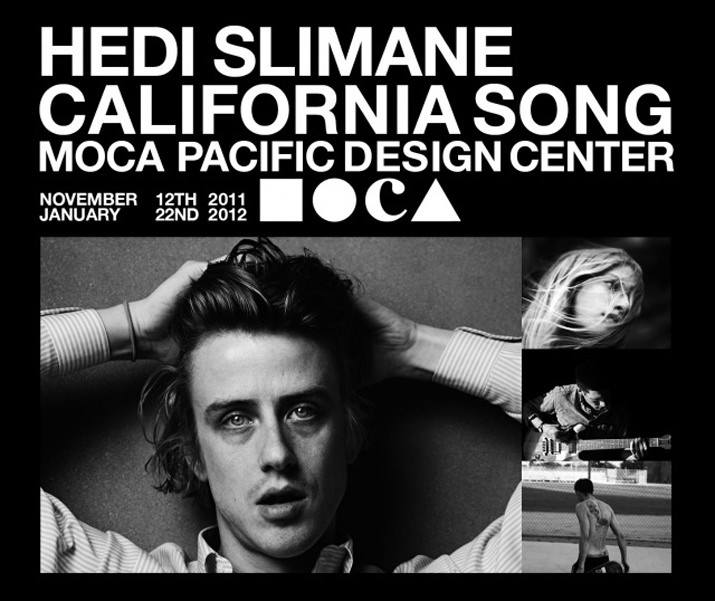 Commissioned for the 2011 debut issue of Garage, a magazine created by Dasha Zhukova, Slimane designed one of the three versions of the publication’s covers. His photograph showed the lower half of 23-year-old nude model Shauna Taylor, whose crotch is covered by a green butterfly sticker created by Damien Hirst. The sticker peels off (inspired by the Velvet Underground album art by Andy Warhol) to reveal a butterfly tattoo, also of Hirst’s design. 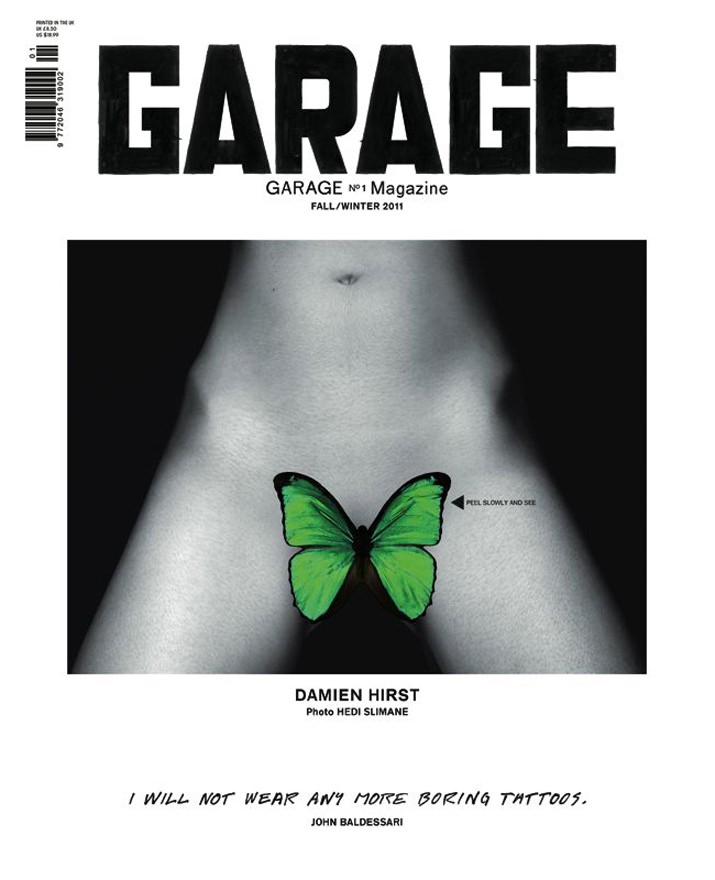 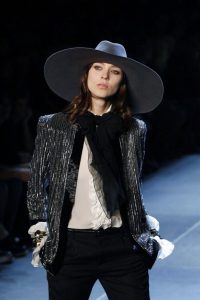