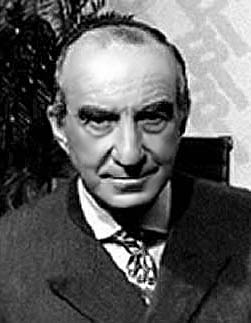 Guccio Gucci  was an Italian businessman and fashion designer, the founder of The House of Gucci and son of an Italian merchant from the country’s northern manufacturing region.

Gucci was born on 26 March, 1881 in Florence, the Italy’s northern manufacturing region. He was the son of an Italian merchant.  In 1898 Guccio Gucci left Florence in Italy to travel and to gain an appreciation of cosmopolitan culture, sophistication, and aesthetics. He he was looking for adventure. Best city for excitement was London. 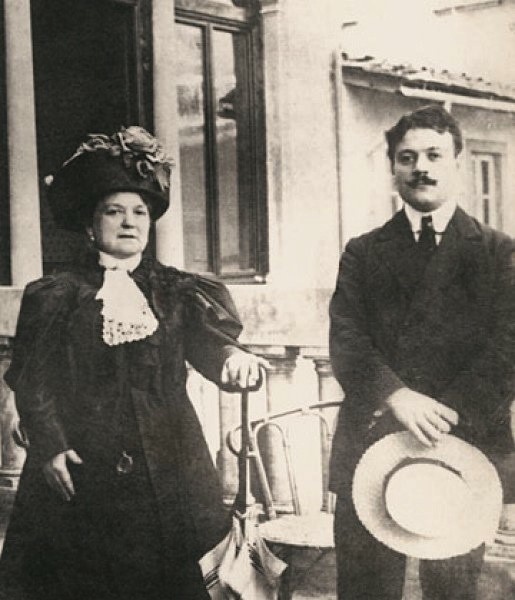 In London he got his first job at the Savoy Hotel. During his career there he kept many titles. Dish washer, waiter, bellhop, concierge were among the few. The pinnacle of his career was an elevator attendant. You may not think of this position as much, but just to give you an idea, Savoy was the first hotel in the world to operate electric elevator. This very same hotel was also the first to install electric lights and telephone prototypes. It was the most central and luxury hotel in Europe in early 20th century. It was the preferred overnight spot for all the celebrities and politicians who visited London. So ambitions Guccio had an honour to give an elevator ride to such famous people as Claude Monet, Merlin Monroe, Frank Sinatra, Winston Churchill and countless others. Of course, Guccio, given the frequency of celebrity encounters, was a true Italian networker. He made connections. He observed and learned their styles, their clothing, accessories, jewellery, manners and habits. 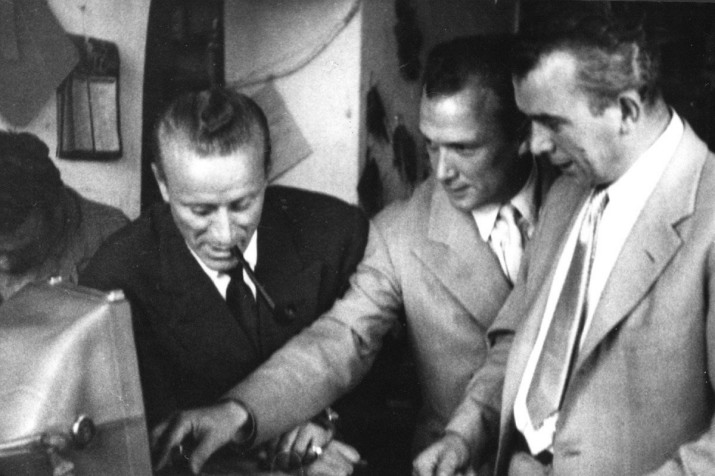 All savings from the years of hotel service Gucci decided to put towards his own business. He came back to Florence and surprisingly, his father’s business didn’t seem as boring as before any more. In 1921 Gucci opened his own store on the Via della Vigna Nuova in Florence. He hoped to attract an exclusive clientele with imported German and English luggage as well as his own custom pieces. As the business grew, Gucci was able to expand the small workshop at the back of his store and hire a more skilled level of artisans to work on the custom bags. Targeting the richest population of Florence Gucci factory quickly turned into producing horse harnessing. Horse sports at that time were considered elite, thus only richest people quickly recognized Gucci brand and with little competition Gucci factory lifted to the new level. 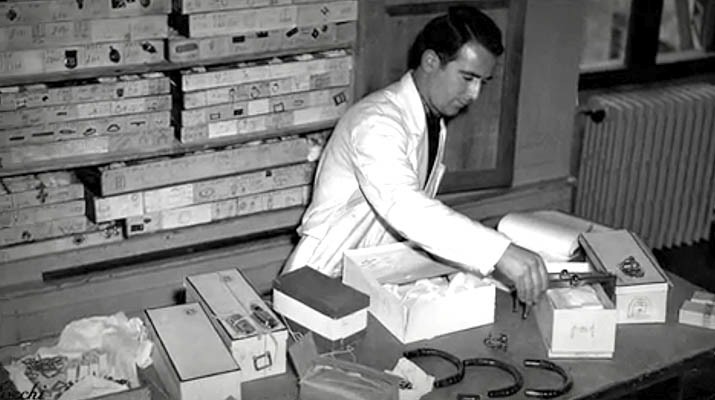 In 1933 the ambitious Aldo Gucci, who was working for his father, designed the first incarnation of the iconic double-G Gucci logo, inspired by his father’s initials. In 1935 Italian dictator Mussolini ordered the invasion of Ethiopia, leading the League of Nations to impose an international trade embargo on his country. Gucci was forced to branch out into other items: shoes, wallets, and belts. Leather supplies were short, so he began making bags out of a specially woven Tuscan canapa (hemp). The lightweight tan bags had a leather trim and were printed with the repeating double-G logo. To this day, the diamond-print Canapa bag remains one of the most instantly recognizable Gucci products. 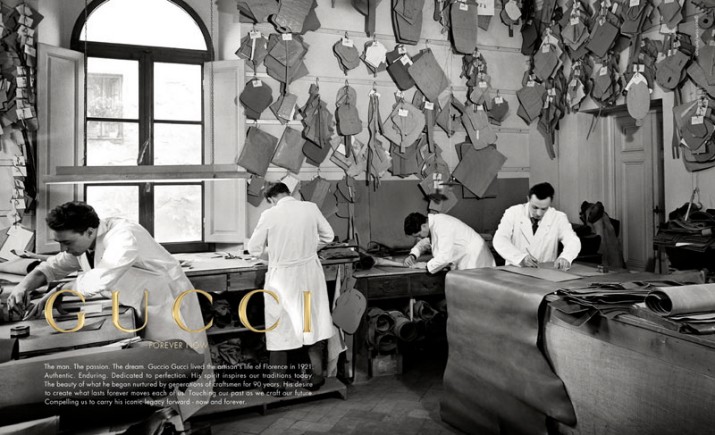 In 1938 Aldo convinced his father to open a second store, in Rome. They find a space on the Via Condotti, close to Bulgari and exclusive shirtmaker Enrico Cucci.  In 1945 at the end of World War II, Gucci’s folding Suiter bags (canapa sacks with a built-in clothes hanger) became popular with the British military officers occupying Rome. 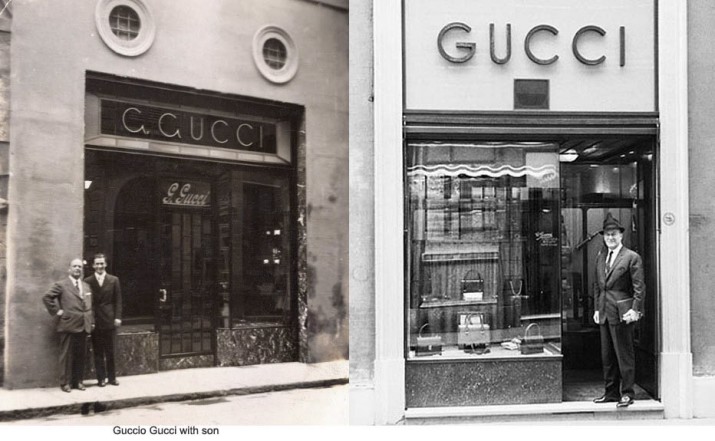 In 1947 Gucci produced its first bamboo-handled bag (at the time just called the 0633, after its item number), whose curvy side was inspired by a saddle’s shape. An ingenious example of “necessity as the mother of invention”, the bamboo became one of Gucci’s many iconic products. Bamboo inspired patterns have also featured on a variety of products from headscarves to watchstraps; it has even been skilfully carved into a pair of golden stiletto heels. A favorite of royalty and celebrities alike, the bag with burnished handle remains a huge favorite today. During the Fifties, Gucci again found equestrian inspiration with its trademark green-red-green web stripe, derived from a traditional saddle girth. It became an instant success and an instantly recognizable hallmark of the brand. 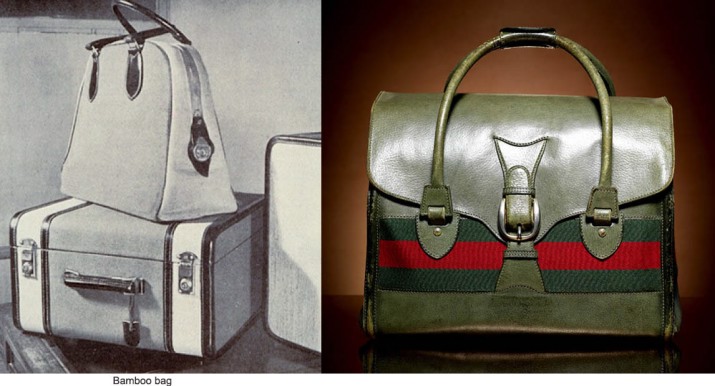 As Guccio aged, Aldo took on increasingly greater responsibility. While on a trip to a London trade fair, he met a Scottish tanner who provided the brindled pigskin that became another Gucci trademark.

In 1951 Giovan Battisti Giorgini, a Florentine aristocrat with connections in the American retail industry, invited Gucci to present its collection at a small show for American department-store buyers and journalists in Europe for the Paris couture shows. The soon-to-be-biannual event brought  Gucci to an American audience for the first time—and eventually evolved  into Florence fashion week. The family opened its first store in Milan, on the Via Montenapoleone. 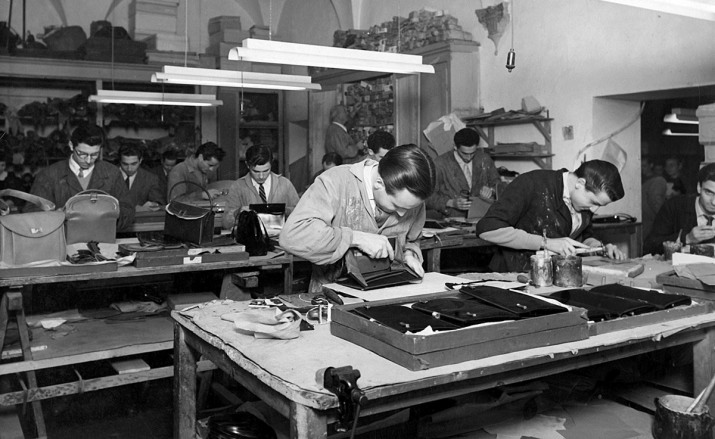 In 1952 Aldo traveled to New York with his brothers Rodolfo and Vasco. With the help of an American lawyer, Frank Dugan, they set up Gucci Shops Inc., which owned  the rights to the Gucci trademark in the U.S. They also opened their first American store on East Fifty-eighth Street, around the corner from Fifth Avenue. Paolo Gucci, Aldo’s youngest son, began to work as a designer under Vasco in Florence. 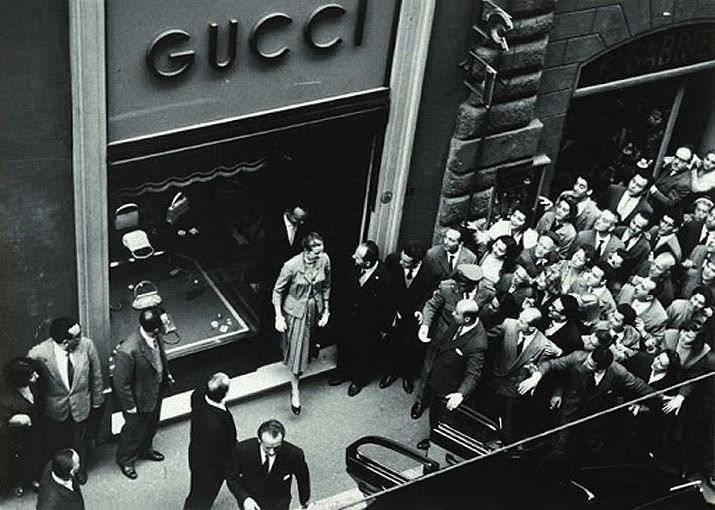 On 2 January,1953, two weeks after Aldo opened Gucci’s New York boutique, his father Guccio Gucci died at home in Florence at 72.  For his final years, he lived near Rusper, West Sussex, England.

The company was split into three parts among Guccio’s eldest sons: Aldo continued to oversee Gucci’s expansion abroad (as well as all major business decisions) while Rodolfo managed the Milan store and Vasco runed a new factory just opened in Florence’s Oltrarno district. 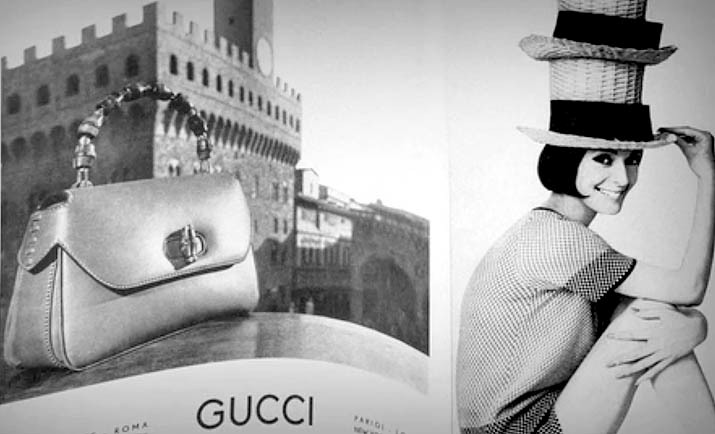 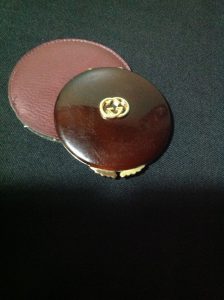