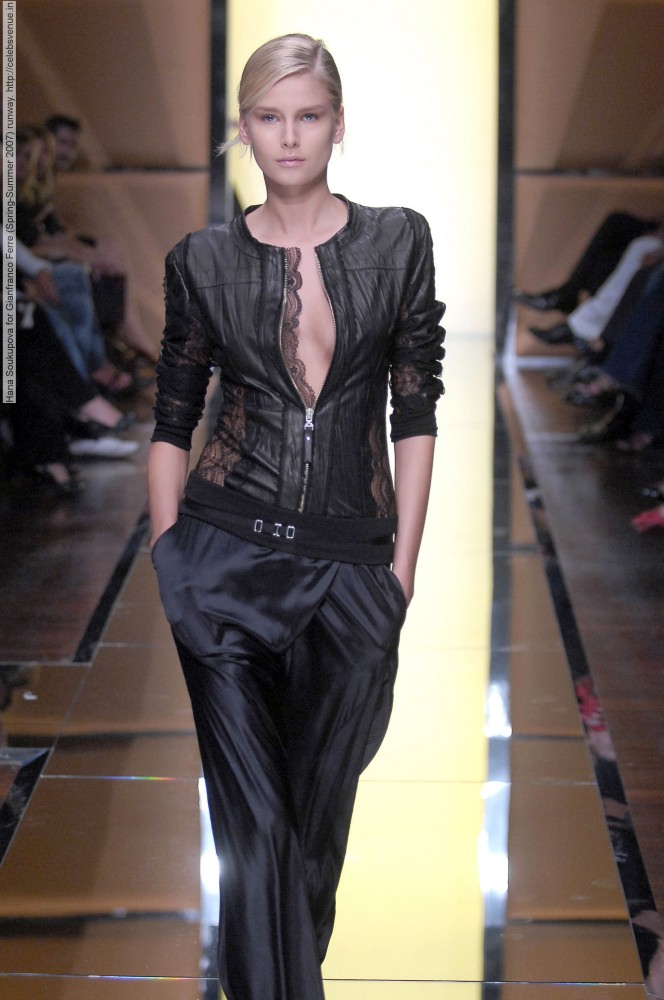 Gianfranco Ferré  (15 August 1944 – 17 June 2007) was a fashion designer also known as "the architect of fashion" for his background and his original attitude toward creating fashion design.

Born in Legnano, Italy, he received a degree in architecture in 1969 at the Politecnico di Milano university. Ferre began his fashion career in 1970 by designing accessories, then worked as a raincoat designer in 1972-74. He started his own company Baila in 1974 and launched his signature collection for women in 1978 with partner Franco Mattioli. The same year he introduced secondary Oaks by Ferré line. His first men’s collection appeared in 1982, fragrances introduced in 1984, watches introduced in 1985, eyewear and bath line (men) appeared in 1986, followed in 1986 by his first couture collection in Rome. In 1987 he  introduced furs.

Ferre became Stylistic Director of Christian Dior in Paris in 1989, when he was chosen by owner Bernard Arnault to replace Marc Bohan. At the time, it was almost unheard of for a non-French designer to lead such a revered Parisian house.  In 1996, it was announced that Ferre would end his engagement with Dior with the Spring 1997 collection for the label.

In 1991 he introduced feminine fragrance, Ferré by Ferré, followwed in 1992 by his household linens collection.

His own label was more relaxed and pared-down than Dior, with functional pockets and no big hats. Sophisticated white shirts have become the symbol of his personal signature in fashion design.

In 1996 debuted Gieffeffe bridge line and men’s jeans collection and Gieffeffe unisex fragrance launched. In 1997 was intriduced women’s jeans line. In 1998 the Ferre empire celebrated its 20th anniversary, considered going public, and  tweaked its image. Stores in New York and Rome were renovated, two London shops opened, and a new Milan headquarters was unveiled, and offices and showroom for its recentrly-created U.S. subsidiary opened on Fifth Avenue in New York. 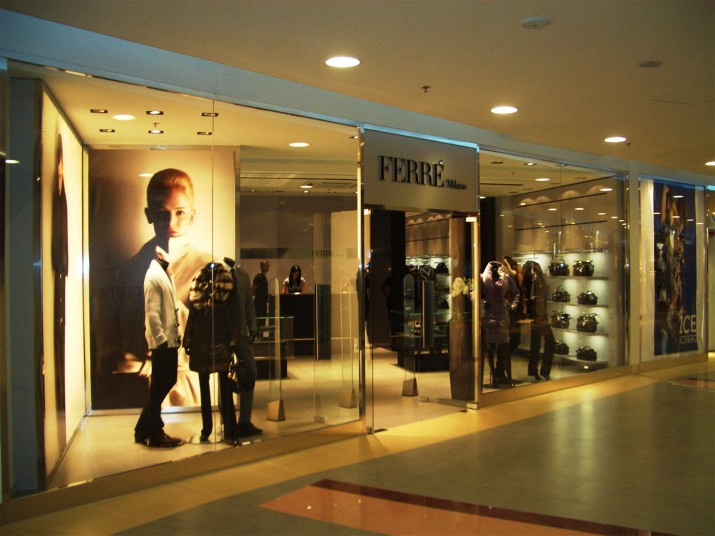 In 2000 the firm was sold to Gruppo Tonino Perna, Ferre began custom tailoring. The year 2001 was marked by opening first US Ferre Jeans store in Miami and in 2001 designer intoduced new atelier and Ferré couture collection. 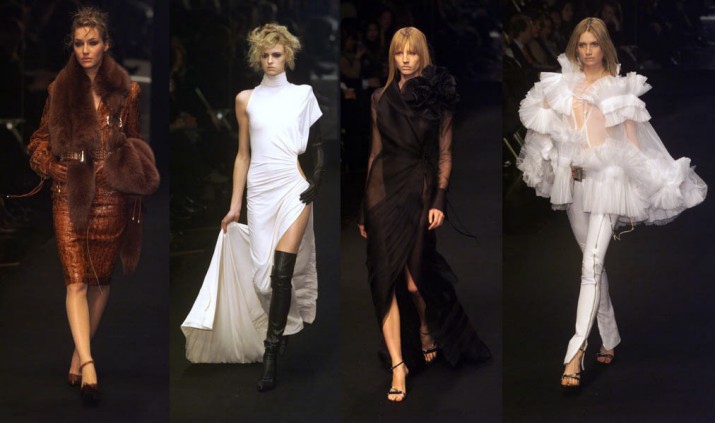 1983 Best Stylist of the Year award by Asahi Shimbun and Women’s Wear Daily;

1989 named "Milanese of the Year" by the Famiglia Meneghina;

1990 I Grandi Protagonisti prize from the Italian Furs Association;

There is nothing understated about Ferré womenswear. His minimalist approach has often made opulent, theatrical statements on the catwalk, recalling the film star glamor projected by Anita Ekberg in the film La Dolce Vita. The clothes reflect a glamorous, fantasy dressing, combined with architectural symmetry. Ferré often exaggerates proportions in tailoring and dressmaking; classic shirt shapes often have extreme cuffs or collars, coats and jackets are defined by silhouette. An extravagant use of luxury fabrics like fur on dresses or long evening coats, leather, and taffeta often in the distinctive, stark colors of red, black, white or gold reinforce this definition of modern elegance. 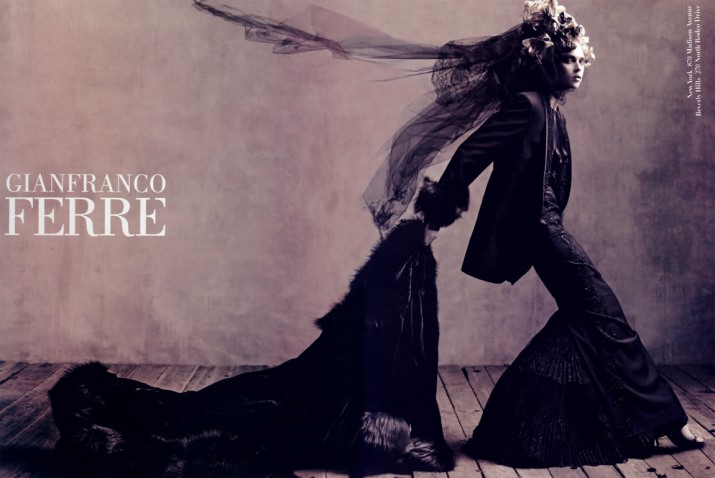 Ferre menswaer collections are less extravagant, based on tradition but designed with his characteristic modernist approach. He sees his customer as a man who appreciates traditional cloth and a classic line. Ferre has developed new tailoring techniques to create a more relaxed, expansive shape for men, a reaction to the hard-edged lines so prevalent in 1980s power dressing. Ferre often looks to London for inspiration, believing the British capital is a key point in the world of fashion. As he explained to journalist Liz Smith, „There is an in-bred eccentricity in London which allows clothes to be worn in original and completely modern proportions“. 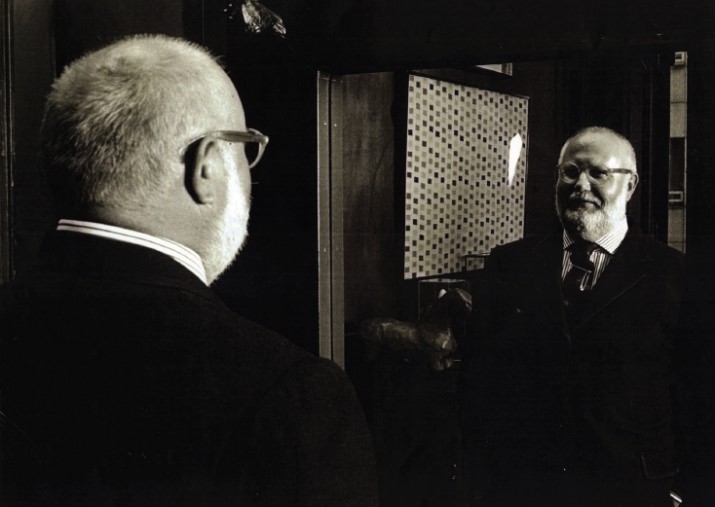 Ferre had a reputation for being a realist, with a practical approach to projects – working with everything in his head from market requirements, manufacturing schedules, financial limitations, and development of themes, to a advertising. Ferré appeared to be extremely critical of trends and fashion gimmicks. He dealt with his demanding schedule, being responsible for a French top fashion brand and his own Italian label, by commuting between Milan and Paris in his private plane. Ferré had a lakeside home in Lake Maggiore, near Milan.

Eva Riccobono was one of his favourite supermodels for catwalks and advertisements and Matteo Ceccarini his best sound designer.

Skin, formerly of Skunk Anansie performed at the lavish after party following the Gianfranco Ferré autumn/winter 2007-8 show in Milan. Giorgio Armani remembered him as "a man of dignity and calm, with a sense of responsibility which always accompanied him". 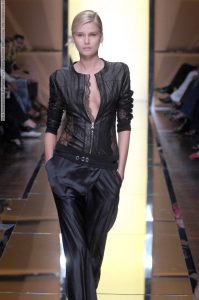