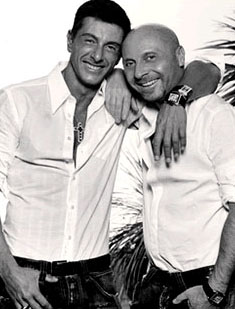 Domenico Dolce was born in Polizzi Generosa, a small village near Palermo, Sicily on August 13, 1958. He grew up in fashion, since his father was a tailor. He has always credited this with the reason fashion became his medium of choice for expressing himself, something he felt a deep desire to do from an early age. He studied fashion when he was young and worked in his family’s small clothing factory as he was growing up.

Deciding to go off and pursue his own career in fashion design, Dolce moved to Milan and got a job there at one of its famous design studios. He knew immediately that he had done the right thing, that he had found the best way to express himself. He told Bruce Weber in Interview magazine, was the way I was able to do the things I was dreaming about. As a designer, I see dreams as my job. It’s like being a psychologist. I have to capture what people are feeling and translate that into fashion and even provide what people want before they consciously know they want it. 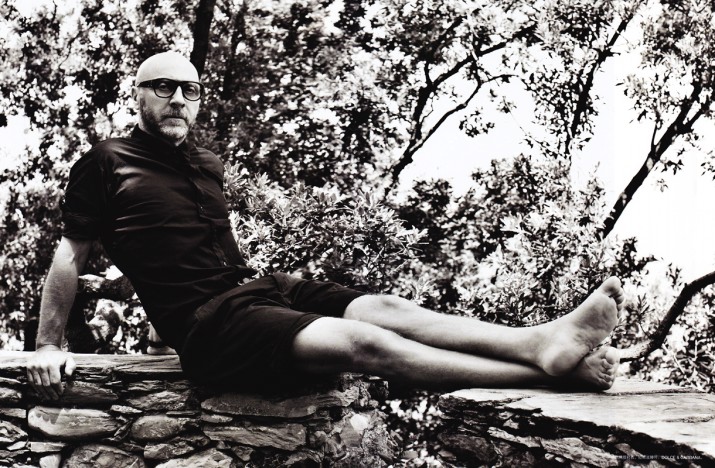 Stefano Gabbana, on the other hand, was born in Milan, Italy, on November 14, 1962. Gabbana, unlike his future partner, had never thought about fashion as a child. He grew up away from it and it was not until he was about 15 years old that he became interested in fashion in general for himself, particularly such designers as Fiorucci.

Instead, Gabbana studied graphic design at the university because he wanted to go into advertising. He worked in that field for a short time after graduation before he quit, realizing that his heart just was not in it. It was at that time that he turned to fashion. He told Weber in Interview, I was lucky because a designer took me under his wing and helped me understand the world of fashion. But it was ultimately Domenico who taught me the most about fashion. As time went on while I was learning about it, I fell in love with it—with designing, with making clothes, with dressing people. 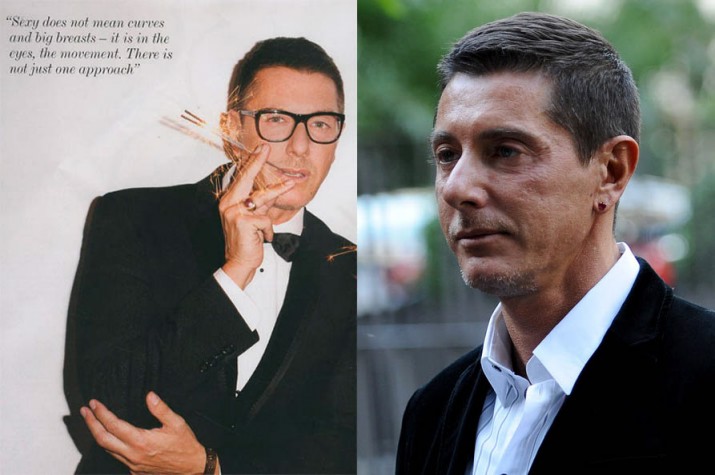 The pair met in 1980 when they were both assistants at an atelier in Milan. They started their partnership in 1982, although they still did freelance designing for other companies until they had officially started their own company. Fame and fortune, however, did not come immediately to the pair. They struggled to come to the attention of the fashion scene and did everything in their power to show off their designs to bring that about. 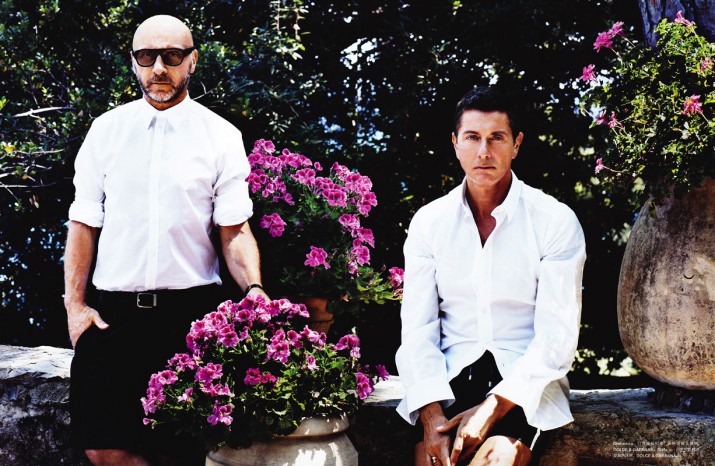 I remember our first show, Dolce reminisced to Susannah Frankel of the Guardian. We did it in a small apartment in Milan. We organized it ourselves, me and Stefano, without PR, [with] nothing. My sister and my brother were on the door. According to Allison Adato of People, Using friends as models, they held shows wherever they could—even in a fast-food restaurant. (The invites looked like hamburgers.) The unconventional approach stirred enough buzz to land them a spot in Milan’s 1984 fashion week. They made their real world debut at the New Talent fashion shows at the Milan collections in October of 1985. They received such acclaim that they launched the Dolce & Gabbana women’s collection the very next year, in March of 1986. Not long after, in 1989 they opened their first boutique in Japan. 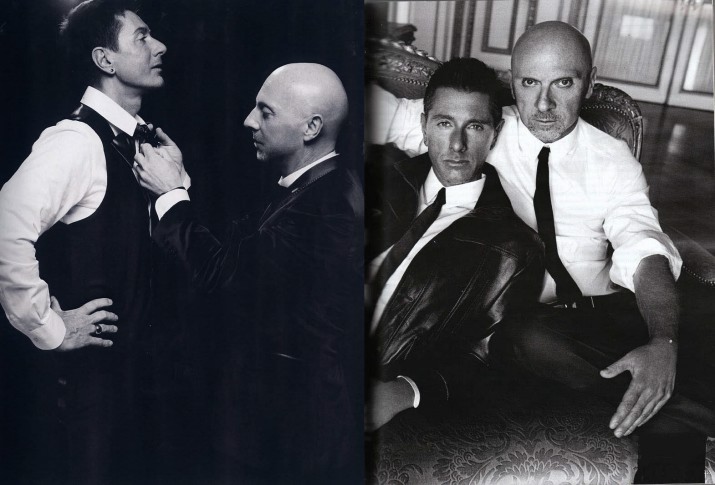 Their style is a mix of traditionally male and female clothing, as they are known to say that fashion and dressing have nothing to do with being straight or gay, but rather that everyone has a part of the opposite sex inside them and that everyone needs to get in touch with that opposite side of their gender to be whole. They point out that it is only modern fashion that has made men and women so different dress-wise. 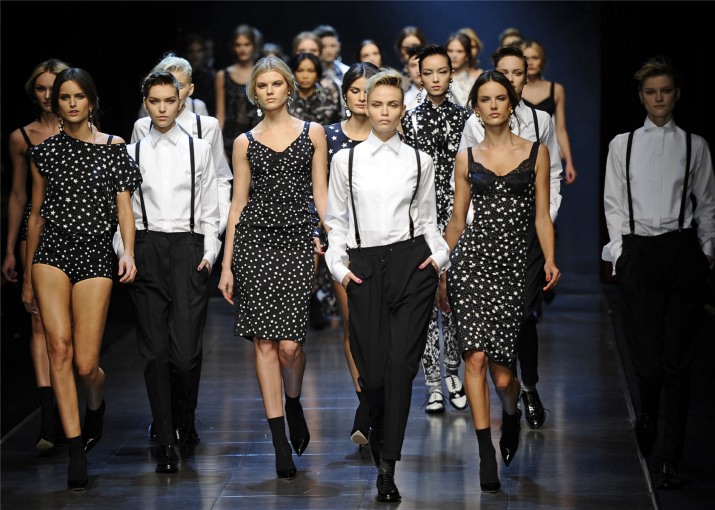 In the 16th century men wore high heels, make-up, and dandy clothes and they were no less masculine than today’s men, and women were seen wearing more manly suit tops and flat shoes. When asked why the two of them collaborated and how it worked, Dolce told Weber in Interview, We have different tastes, which means that together we tap a combination of desires. Sometimes we might create something that is more Gabbana; sometimes it might be more Dolce. But what we create always has to arrive at some kind of agreement. They both love the style and feel of southern Italy and most of their designs pull heavily on that tradition. We prefer southern people, Gabbana told Frankel of the Guardian. They have more passion. What we hate is when people put up a barrier and try and hide what they feel. 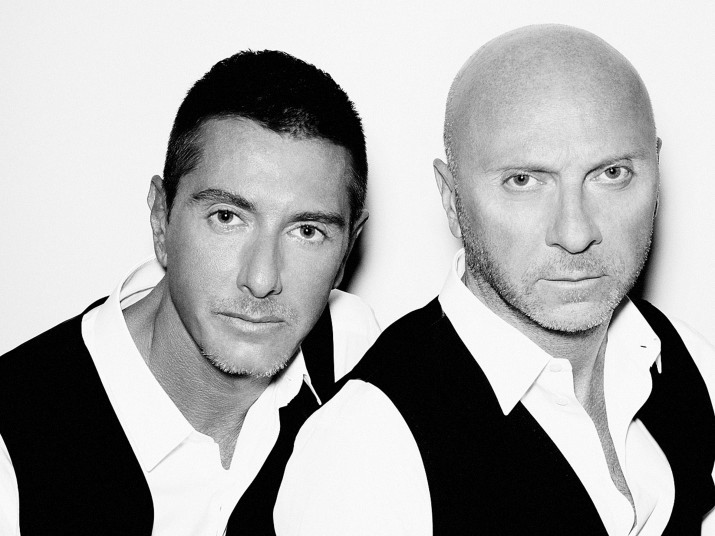 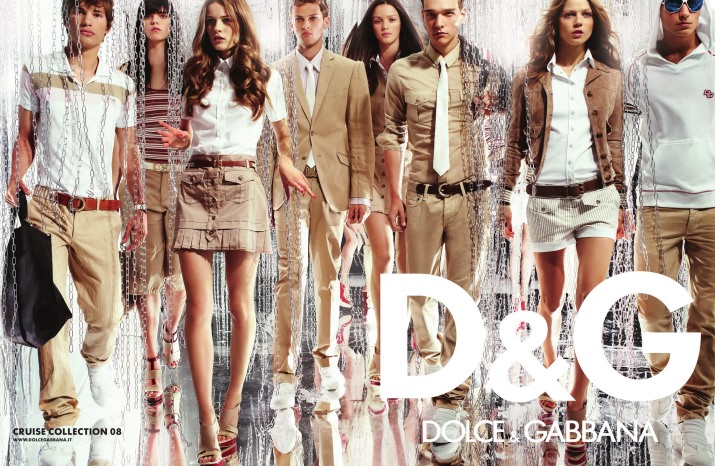 Every year their collections change, although each designer has his favorite pieces that remain in the collection each season. Their concern has never been with what is trendy, but what feels right at that moment. Gabbana was quoted by Frankel in the Guardian as having said, We sketch everything from new each season, and it doesn’t come out the same, but it has the same feeling. This is better in the end because I have one taste. The customer comes to my shop to buy one taste, not another taste, not what is trendy. Sometimes what’s in fashion is good for Dolce & Gabbana, sometimes it’s not. But it’s better to stay a little outside. Not to try and keep up with it all. It’s better to stick with your own style, otherwise, e la morte [death].

The one thing that really made the designers’ career, however, was when their clothes came to the attention of pop sensation Madonna. She has become one of the duo’s biggest fans, and the feelings are definitely mutual. There are very few people from whom the two designers will take orders and design clothing specifically for, but for Madonna they will drop everything to help. In 1993, the duo created 1,500 costumes for Madonna’s world tour. The Girlie Show.They expected this to bring them into the eyes of fashion critics and aficionados around the world, but they received even more recognition than they expected. Then, for Madonna’s Music album, the designers went even further for their favorite pop star; not only did they dress Madonna and her entire ensemble, but they designed and created an entire backdrop for the tour. It was a big success. 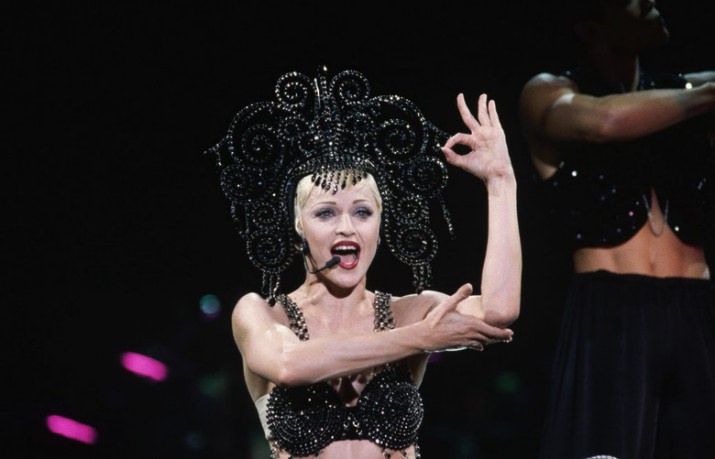 In 1995 the book 10 Years of Dolce and Gabbana was published. The book, which commemorated the first decade of the designers’ fashions in photographs had an introduction by Isabella Rossellini, the Italian actress who has been wearing their clothes almost since the pair started designing them. Frankel in the Guardian said of the duo’s fashions. There’s nothing self-consciously cool about the label. What’s more, it suits women (of means, of course) of all shapes and sizes—in many cases, the stick-thin would be hard pushed to fill it. Instead, Dolce & Gabbana’s designs are overtly romantic, unashamedly voluptuous, and women the world over love them for it. 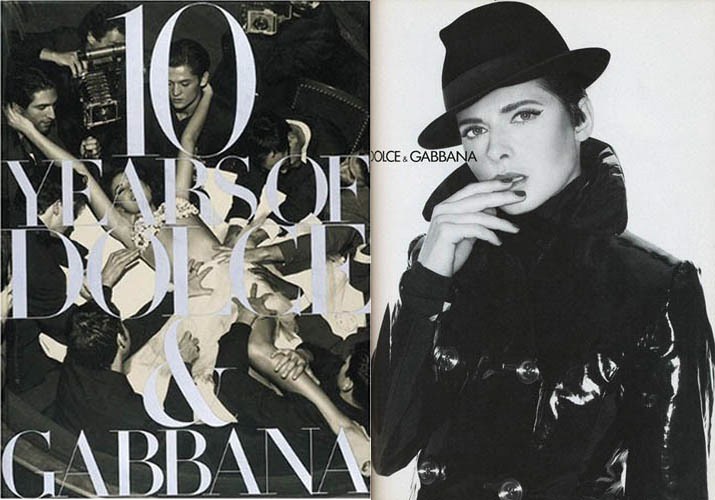 And their popularity has spread like wildfire. Their clothing has been worn by such famous people as Brian Ferry, Brad Pitt, Bruce Willis, Demi Moore, Victoria Beckham, Kylie Minogue, Beyonce Knowles, Catherine Zeta-Jones, Salma Hayek, and Angelina Jolie, just to name a few. 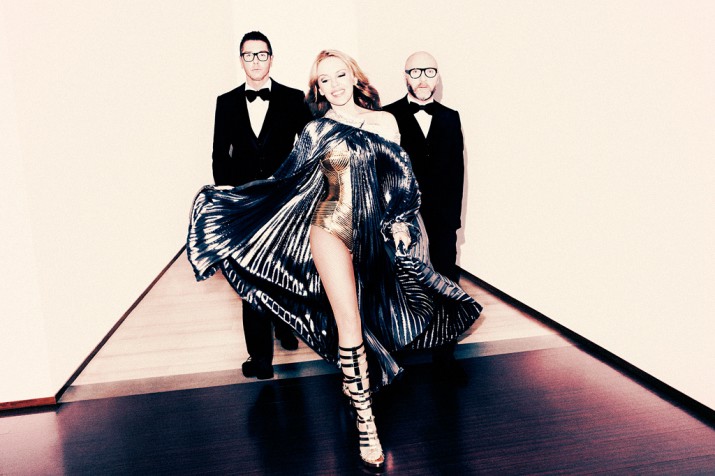 Although the pair became lovers when they set up their fashion house in 1985, they only announced their relationship publicly in 2000. They bought the Villa Volpe, a 19th-century palazzo in the center of Milan and moved in together. It was a much-talked about house, covered with animal prints, red sofas, and church candles, reflecting the pair’s eclectic tastes. In 2003 the pair, who love the glamour and glitz of Hollywood and professedly love it when stars wear their fashions, came out with their second book of photos called Hollywood. 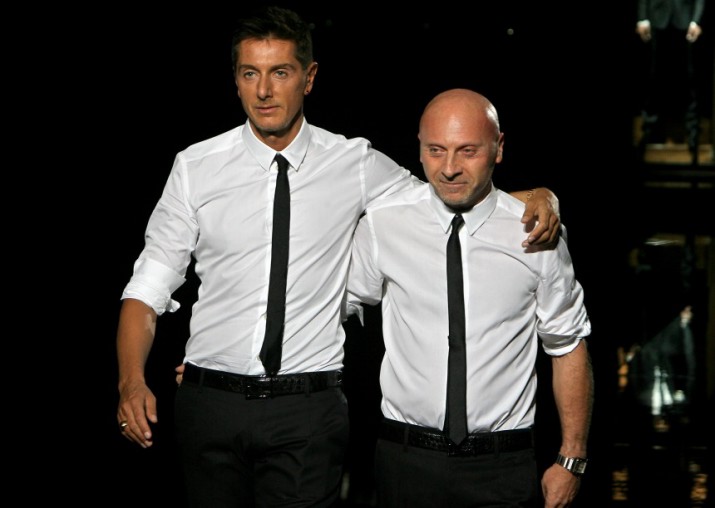 In 2004 Dolce and Gabbana opened their first stand-alone store anywhere in the world on Bond Street in London, England, the D&G emporium, which stocked the duos less-expensive designer collection. Not everyone was excited about the fact, though, just as not everyone was a fan of the duo’s styles. A writer for the Daily Mail called the Dolce & Gabbana style cheap. &quot;That’s not to say D&G clothes can’t look good—you just have to be 18 and have a 12-year-old boy’s body to wear them. And of course they’re fun, but that’s usually because the joke’s on the person wearing them. One of D&G’s few strengths is that they know who they’re appealing to and play on that.&quot; Although not all felt that way. Lisa Armstrong for the Times of London said, &quot;Gabbana’s knack for creating just the right degree of theatrical gorgeousness stops the average shopper dead in her tracks, while Dolce’s eye for cut and detail seduces her in a quieter way, usually after she has tried the clothes on. It’s a formidable combination.&quot;

After 19 years, in February of 2005 Dolce and Gabbana announced that they had split up their personal relationship. They moved into separate apartments, although they both lived in the same block in Milan, and they have said that they will probably still go on vacation together. The break up, they hastened to assure the world, would not affect their famous label. Richard Edwards in the Evening Standard quoted Dolce as having said that the separation was friendly. &quot;On a professional level we are still together. We work together wonderfully well, we have a very strong understanding. We have a very strong love which ties us to each other.&quot; 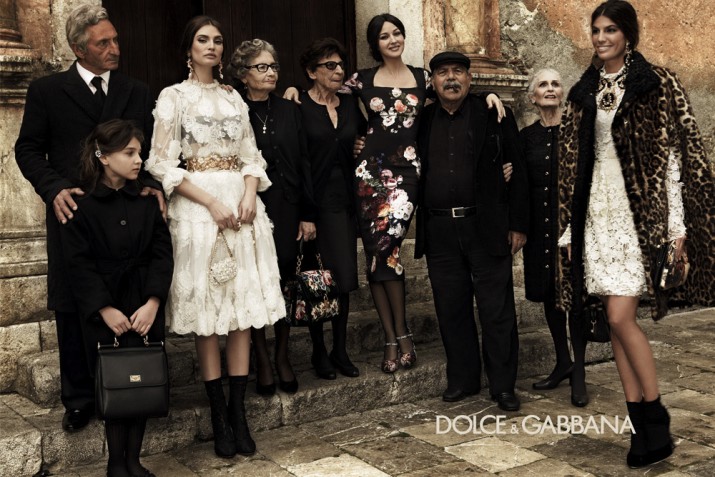 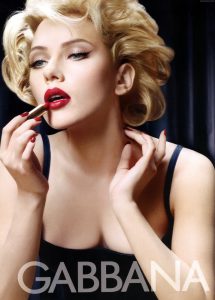