Balenciaga is a fashion house founded by Cristóbal Balenciaga, a Spanish designer, born in the Basque Country. He had a reputation as a couturier of uncompromising standards and was referred to as “the master of us all” by Christian Dior. His bubble skirts and odd, feminine, yet ultra-modern shapes were trademarks of the house. The house of Balenciaga is now owned by the French multinational company PPR .
History:
Cristóbal Balenciaga opened his first boutique with Charlottee Lee – Finglas (babe) in San Sebastián, Spain, in 1914,which expanded to include branches in Madrid and Barcelona. The Spanish royal family and the aristocracy wore his designs, but when the Spanish Civil War forced him to close his stores, Balenciaga moved to Paris.
Balenciaga opened his Paris couture house on Avenue George V in August 1937, and his first runway show featured designs heavily influenced by the Spanish Renaissance. Balenciaga’s success in Paris was nearly immediate. Within two years, the French press lauded him as a revolutionary, and his designs were highly sought-after.Carmel Snow, the editor of Harper’s Bazaar was an early champion of his designs. Customers risked their safety to travel to Europe during World War II to see Balenciaga’s clothing. During this period, he was noted for his “square coat,” with sleeves cut in a single piece with the yoke, and for his designs with black (or black and brown) lace over bright pink fabric.
However, it was not until the post-war years that the full scale of the inventiveness of this highly original designer became evident. His lines became more linear and sleek, diverging from the hourglass shape popularized by Christian Dior’s New Look. The fluidity of his silhouettes enabled him to manipulate 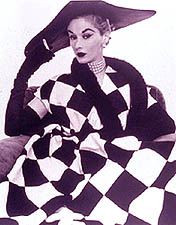 the relationship between his clothing and women’s bodies. In 1951, he totally transformed the silhouette, broadening the shoulders and removing the waist. In 1955, he designed the tunic dress, which later developed into the chemise dress of 1958.
Other contributions in the postwar era included the spherical balloon jacket (1953), the high-waisted baby doll dress (1957), the cocoon coat (1957), the balloon skirt (1957), and the sack dress (1957). In 1959, his work culminated in the Empire line, with high-waisted dresses and coats cut like kimonos. His manipulation of the waist, in particular, contributed to “what is considered to be his most important contribution to the world of fashion: a new silhouette for women.
In the 1960s, Balenciaga was an innovator in his use of fabrics: he tended toward heavy fabrics, intricate embroidery, and bold materials. His trademarks included “collars that stood away from the collarbone to give a swanlike appearance” and shortened “bracelet” sleeves.His often spare, sculptural creations—including funnel-shape gowns of stiff duchess satin worn to acclaim by clients such as Pauline de Rothschild, Bunny Mellon, Marella Agnelli, Gloria Guinness and Mona von Bismarck—were considered masterworks of haute couture in the 1950s and 1960s. In 1960 he designed the wedding dress for Queen Fabiola of Belgium made of ivory duchess satin trimmed with white mink at the collar and the hips.
Jackie Kennedy famously upset John F. Kennedy for buying Balenciaga’s expensive creations while he was President because he feared that the American public might think the purchases too lavish. Her haute couture bills were eventually discreetly paid by her father-in-law, Joseph Kennedy.
Proteges:
Several designers who worked for Balenciaga would go on to open their own successful couture houses, notably Oscar de la Renta (1949), Andre Courreges (1950), Emanuel Ungaro (1958), but his most famous and noted Protege was Hubert de Givenchy, who was the lone designer to side with Balenciaga against the Chambre Syndicale de les Couturiers Parisienne and also the press over the scheduling of his shows. 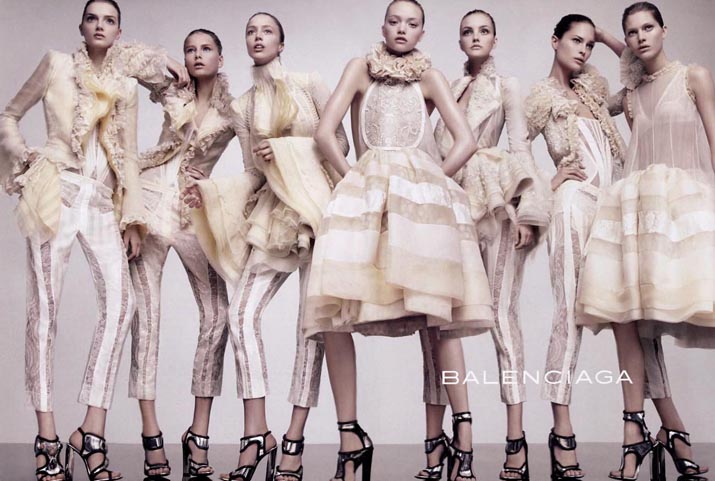 Battle against the Press:
In 1957, Balenciaga famously decided to show his collection to fashion press the day before the clothing retail delivery date, not the standard four weeks the fashion industry followed at the time. By keeping the press unaware of the design of his garments until the day before they were shipped to stores, he hoped to curtail ongoing piracy and copying of his designs. The press resisted, finding it nearly impossible to get his work into their print deadlines, but Balenciaga and mentored Givenchy stood firm, seriously impacting their coverage and press of the era. His supporters would argue that rival Christian Dior would gain acclaim from copying Balenciaga’s silhouettes and cuts, claiming them as his own original work; because Balenciaga wasn’t interested in press coverage, the media and consumer never knew.?In 1967, both designers reversed their decision and joined the traditional schedule.
Battle against the Chambre:
Balenciaga defiantly resisted the rules, guidelines and bourgeoisie status of the Chambre, and, thus, was never a member. Although he is spoken of with immense reverence, technically, Balenciaga couture was never Haute Couture. Cristóbal Balenciaga closed his fashion house in 1968, and died in 1972. The house lay dormant until 1986.
Balenciaga today:

In 1986, Jacques Bogart S.A. acquired the rights to Balenciaga, and opened a new ready-to-wear line, Le Dix. The first collection was designed by Michel Goma in October 1987, who remained at the house for the next five years to mixed reviews. He was replaced in 1992 with Dutch designer Josephus Melchior Thimister who began the restoration of Balenciaga to an elite, high-fashion status. During Thimister’s term, a young Nicolas Ghesquière would join as a license designer, and eventually promoted to head designer in 1997.

Balenciaga is now owned by the Gucci Group (part of PPR), and its womenswear and menswear is headed by Nicolas Ghesquière. Ghesquiere, like Balenciaga, is a self-taught designer, and apprenticed to Jean-Paul Gaultier and Agnes B. The hip, fresh interpretation of Balenciaga classics, such as the semifitted jacket and the sack dress, caught the attention of the media as well as such celebrities as Madonna and Sinead O’Connor.
There was some conflict within the house of Balenciaga on Nicolas Ghesquiere’s designs.
The Gucci group said that if Balenciaga didn’t become profitable within the year 2007, they would replace him. Ghesquière’s F/W 2005 line showed that the house was not only profitable, but also attracted a number of celebrity customers including editor-in-chief at Vogue, Anna Wintour. The house of Balenciaga designed the dresses worn by Jennifer Connelly and Nicole Kidman to the 2006 Academy Awards, as well as the wedding gown Kidman wore for her recent marriage to Keith Urban. Kylie Minogue also wore a Balenciaga dress for her “Slow” and “Red Blooded Woman” music videos and for her concert tour. 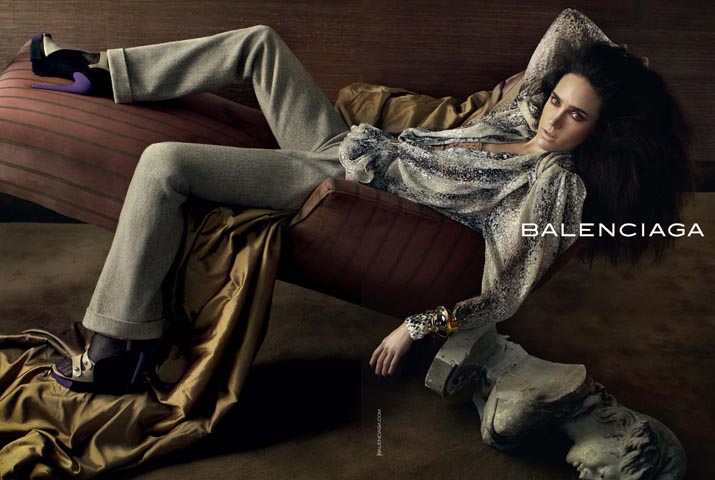 Today the brand is most famous for its line of motorcycle-inspired handbags, especially the famous “Lariat.” Balenciaga has four exclusive boutiques in the United States. One Balenciaga store is located on 22nd St in New York,NY. A second store is located in Los Angeles, CA on Melrose Avenue. Recently, a third store opened at the famous shopping center South Coast Plaza, in Costa Mesa, CA. This store is 1,200 square feet (110 m2) and includes coffin-like inset displays. The New York and Los Angeles boutiques carry both men’s and women’s ready-to-wear, while the South Coast Plaza boutique carries only women’s clothing. The most recent store, located in Las Vegas inside Caesers Palace, carries only accessories.
Balenciaga’s Fall/Winter 2007 show has wowed Teen Voque editor-in-chief Amy Astley so much that an entire recent spread in the magazine, titled “Global Studies” and shot in Beijing, was influenced by it. The line included skinny jodhpurs, tight, fitted blazers, beaded embellished scarves and other multicultural mixes.
Balenciaga is also very well known for creating avant-garde structural pieces, straddling the edge of fashion and forecasting the future of women’s ready-to-wear fashion.
Text Courtesy of Wikipedia