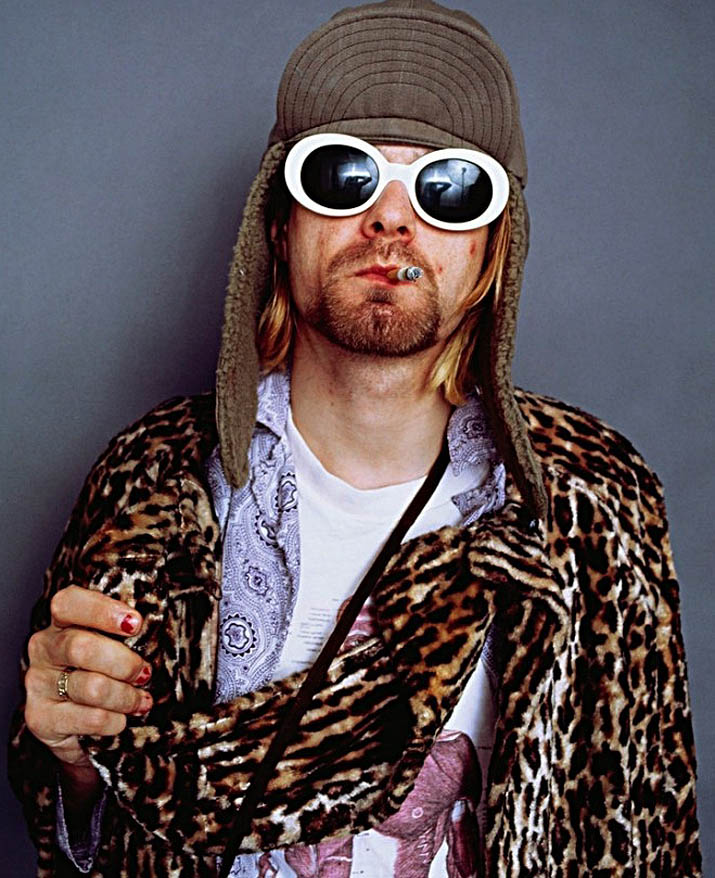 The grunge music scene sprang up in the mid 80’s and many believe Seattle was the roots of this genre. It took off and was embraced in the early 1990’s. Bands such as Nirvana and Pearl Jam took the reins. It was a time of rebellion fueled by the youth, distorted through the electric guitar and sang with poetic justice.

Words and clothing that reached out to the different, the lost, and those seeking to be something other than society’s expectations. The clothing reflects the feelings song writers tried to project in their music. Layers of clothing, unkempt with wrinkles, holes and mixed and unmatched; screaming we don’t give a damn are smashing their way back down the runways. 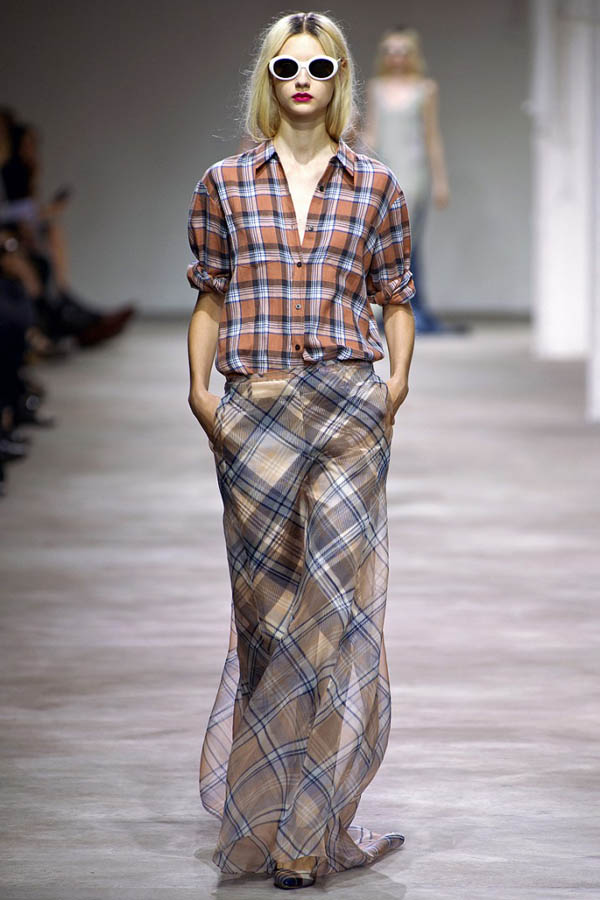 Dries Van Noten opened up his show in full force grunge goodness. Plaid prints layered up on plaid, textures and colors put together in various ways. Long skirts, oversized sweaters, big sunglasses and bold lips. Subtle embellishments that gave way to a romantic notion and airy chiffon that floated with every movement of the models. The statement was as loud as the feedback of an amplifier. 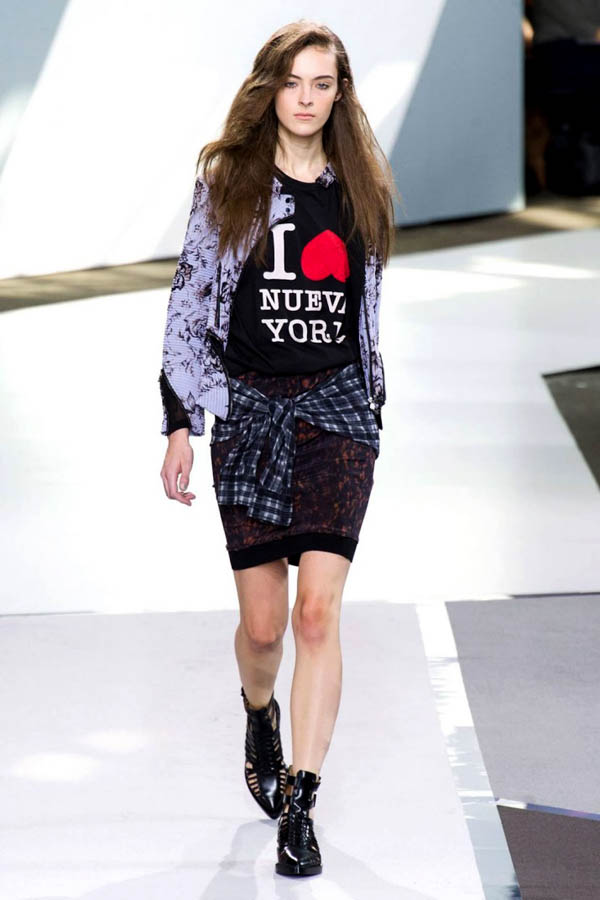 Philip Lim mixed and cut fabrics putting them together in a new way. Naming his shoes after Rock & Roll ladies of the 90’s Courtney, PJ, and Shirley. Modernizing the past to present a new present. Oversized flannels, t-shirts, mini skirts, baby doll dresses and jeans with patch work crashed down Philip Lim’s runway. Hair and makeup looked as if the model had slept for a minute after a hard night out and they could not find their makeup bag or a hair brush after they awoke. Adding to the rock nostalgia.

www.31philliplim.com
Acne designer Jonny Johansson’s found inspiration in music which he branded onto tank tops so the message was loud and clear. “My life’s an open book; you read it on the radio. We’ve got no where to hide, we got no where to go. But’ if you still decide you want to take a ride. Meet me at the Wrecking ball.” These Emmylou Harris lyrics from Wrecking Ball inspired some of the experimentation in Johansson’s collection below. 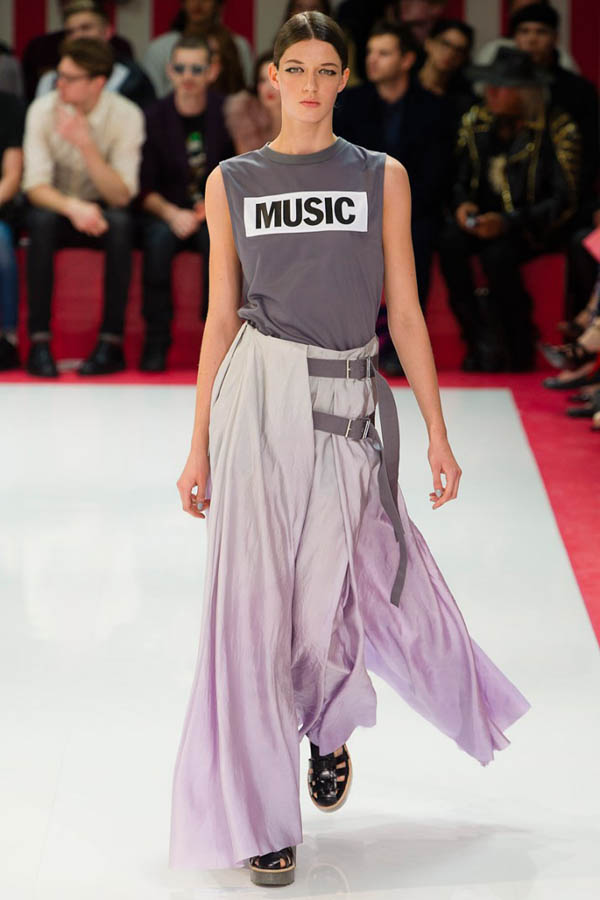 After the show Jonny said that he wanted to do something “romantic I am tired of the hard, graphic thing, even though it’s something I’ve been pushing myself [to do] for a long time. And I wanted to bring things together that didn’t necessarily belong together.” Airy pastels, raw edges and buckles with tanks tops may not belong together but they work well together. Once again things perceived by society as things that go together, may not be the case in every scenario. Grunge may have had a point. 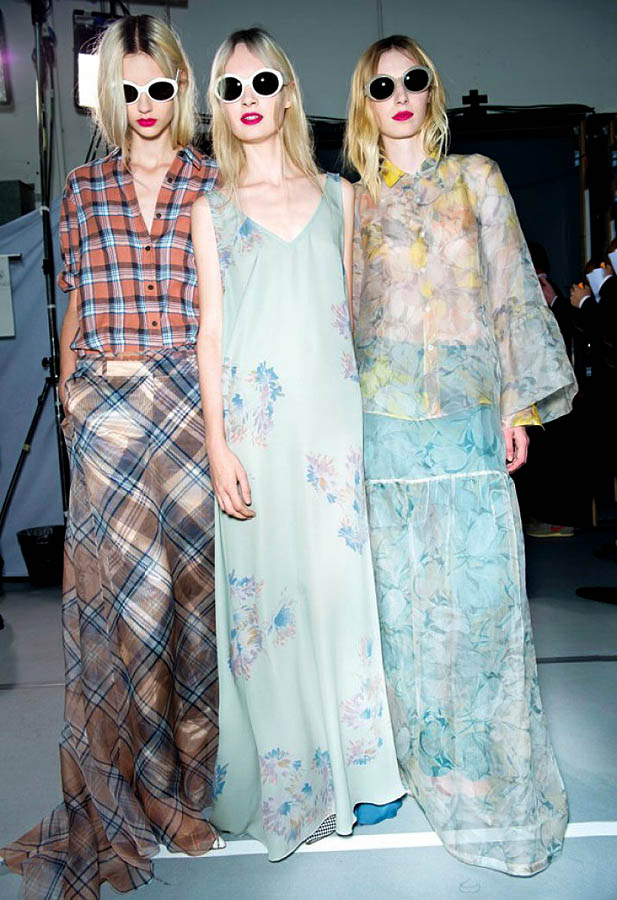 My heart may be in this trend because I survived my teenage years in the nineties and loved every minute of it. No matter if you survived the era or not it has made an impact on fashion and continues to prevail. Whatever your style may be; you can mix and match these wonderful designer pieces to meet your style needs. Make it your own and don’t follow society’s fashion rules at every turn.