Modeling goes all the way back to kings and queens having their garments sewn and altered for their liking.

In the last 50 or so years we have watched models with figures that most consumers could appreciate relating to. Its apparent that Spain is requesting to look back in our modeling history of what worked and what all considered healthy and pleasing to the eye. (see Milan story below date-line info)

• The 40’s and 50″s brought  figures with a curve, example Marilyn Monroe, and Rita Hayworth. The world was in applaud to the look.

• In the 60’s and 70″  brought on Cheryl Tiegs, Marisa Berenson, Twiggy, Jean Shrimpton, Wilhelmina, Veruschka and Benedetta Barzini  as “supermodels”. The term gained currency in the 60’s by analogy with Andy Warhol’s “superstars”. 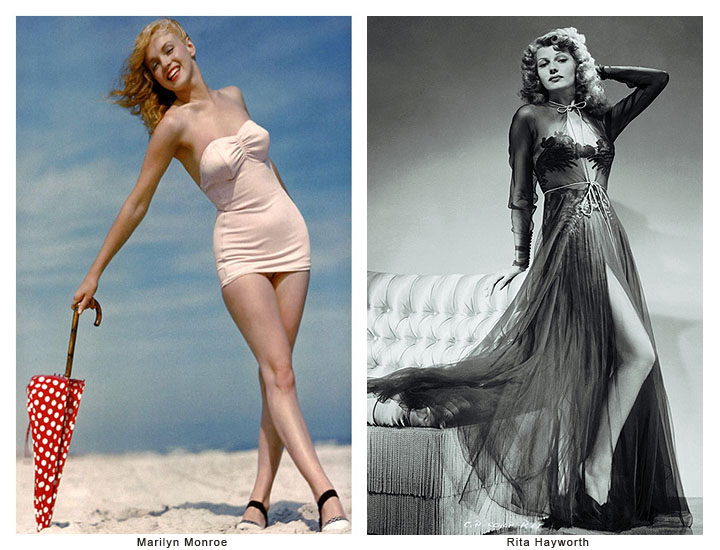 In the 1970s, models figures were liked and loved by both sexes and consumers. Some models became more prominent as their names became more recognizable to the general public. Sports Illustrated editor Jule Campbell abandoned then-current modeling trends for its fledgling Sports Illustrated Swimsuit Issue by photographing “bigger and healthier” California models and printing their names by their photos, thus turning many of them into household names and establishing the issue as a cornerstone of supermodel status. 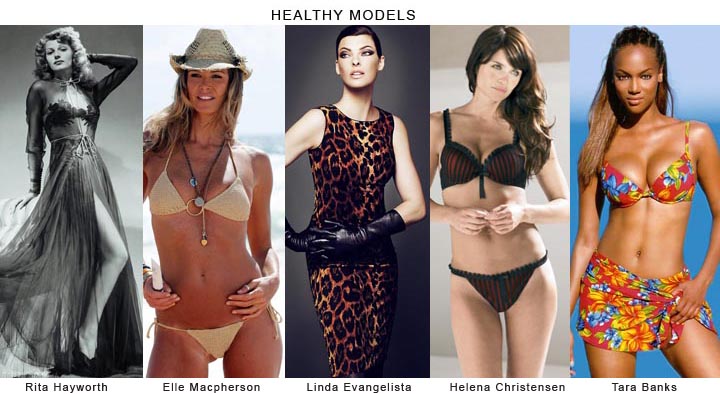 In the early 80’s models were in health shape and it proved with fashion designers beginning to advertising on television and billboards. Catwalk regulars like Gia Carangi, Cheryl Tiegs, Carol Alt, Christie Brinkley, Kim Alexis, Paulina Porizkova, and Elle Macpherson began to endorse products with their names, as well as their faces, through the marketing of brands such as the beverage Diet Pepsi to the extension of car title Ford Trucks. As the models began to embrace old-style glamour, they were starting to replace film stars as symbols of luxury and wealth. In this regard, supermodels were viewed not so much as individuals but as images. 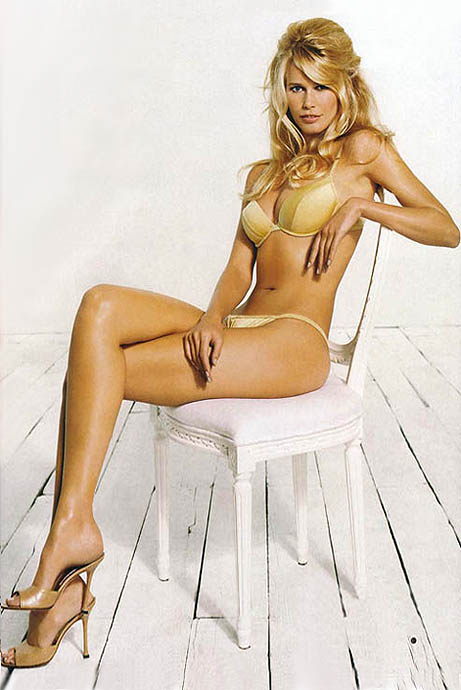 By the 1990s, the models were still on track with displaying the healthy wholesome look. The supermodel name became increasingly prominent in the media. The title became tantamount to superstar, to signify a supermodel’s fame having risen simply from “personality.” Supermodels did talk shows, were cited in gossip columns, partied at the trendiest nightspots, landed movie roles, inspired franchises, dated or married film stars, and earned themselves millions. Fame empowered them to take charge of their careers, to market themselves, and to command higher fees. 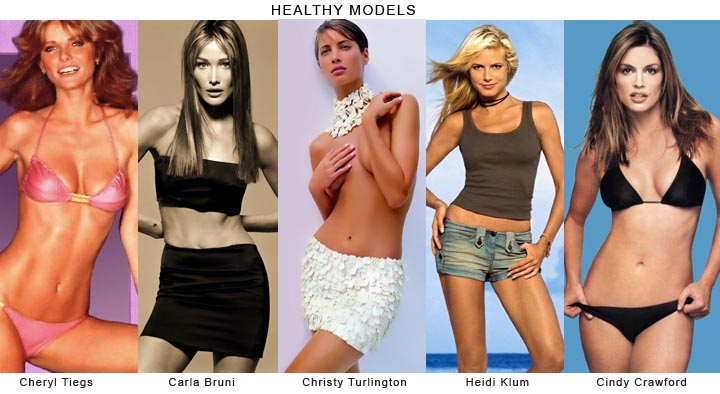 When Linda Evangelista mentioned to Vogue that “we don’t wake up for less than $10,000 a day,“ she may have been playfully pretending the role of an up-scale union representative, but the 1990 comment became the most notorious quote in modeling history. The defining year and turning point for models, fashion, and popular culture was 1990 when the combined power, beauty and influence of 5 women created such an impression on the world that a new word was coined especially for them: SuperModel. 1990 began with a January British Vogue cover presenting five of the top modeling stars of the era hand-picked and photographed by Peter Lindbergh. 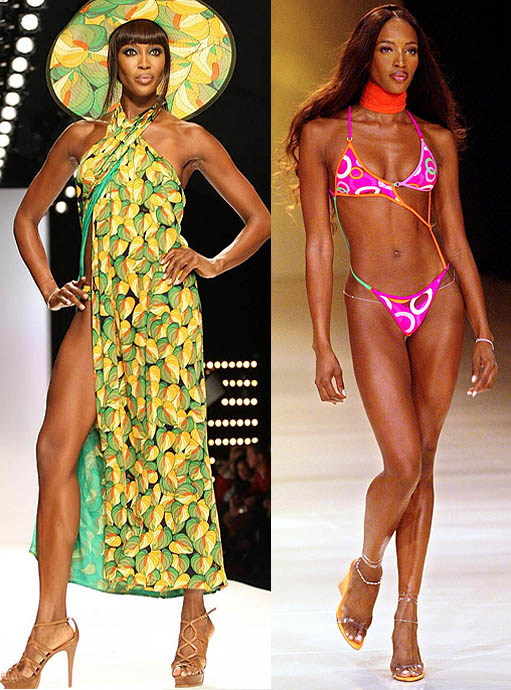 The now famous cover created such a stir, pop star George Michael cast the same five models in his music video for his international hit song, “Freedom! ’90.” The five models were Naomi Campbell, Cindy Crawford, Christy Turlington, Linda Evangelista, and Tatjana Patitz. Each attained world-wide fame and fortune, sharing covers of all the international editions of Vogue, walking the catwalks for the world’s top designers, and becoming known by their first names alone. 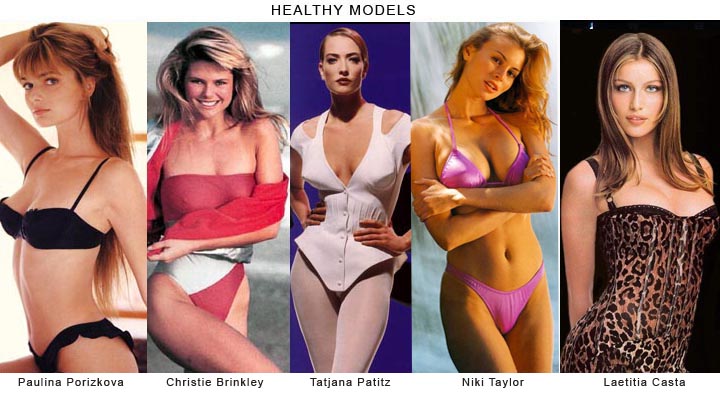 The early years of 2000’s were with models still showing off health looks, models coming from the very end of the 90’s into the early 2000’s like Helena Christensen, Heidi Klum, Tyra Banks, Milla Jovovich, Laetitia Casta, Carla Bruni, Nadja Auermann, Eva Herzigova, Tatiana Sorokko were still carring on the tradition of being considered healthy models.

By 2006 to 2011 models that have that healthy look, have been in our sights, naming a just a handful, Doutzen Kroes, Daria Werbowy, Coco Rocha and Anna Maria Jagodzinska  to having the figure that consumers both men and women could identify with and like seeing week after week. 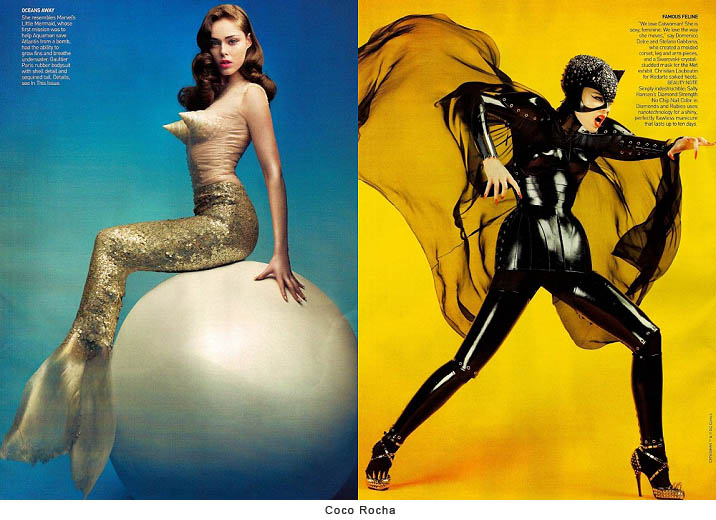 Below, the article concerning Madrid’s Fashion Week and Milan’s mayor is about a selection of models that is slowly growing. Bringing concern with certain people in the fashion industry. 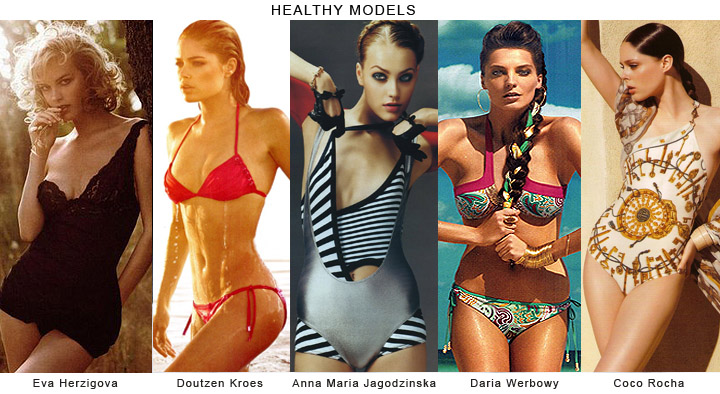 (NOTE: This article is not to point the finger who is not healthy. Its to open our eyes on what worked for models, designers and what consumers were most happy with seeing)

Wouldn’t it be refreshing to see more glowing, healthy-looking models on the runway? There is no denying that the catwalk is already graced with countless gorgeous women – but what happens when the term ‘gorgeous’ starts to have a new meaning?

Today’s society has portrayed the ideal ‘fashion body’ as being stick-thin – a frame that has earned itself controversy in regards to health.  In an effort to encourage a healthy-looking runway body however, Madrid Fashion Week has decided to deny ‘too-skinny’ models access onto the famed catwalk.

What a bold move!

It is a common request amongst big-name designers and couturiers to use extremely skinny models in runway shows, but according to some, these models are considered overly thin, and unhealthy.  Despite such opposition however, these body types are the ones most in demand when it comes to making under-sized clothing look sexy on the catwalk.

It is no secret that designers want their clothes to look the best they can, and many feel that using strikingly slender figures will achieve just that.  However true this may be, alternative viewpoints suggest that by steering away from overly thin models, and by choosing size 2 or 3 girls versus size 0’s, runway clothing will appeal to more buyers and henceforth lead to greater numbers in terms of ordering apparel.

Whether or not this would be the case, fashion industry professionals, elite clientele, and the public continue to hold on to their differing opinions on this issue.  Could there perhaps be a happy medium to help solve such disagreement? With the blink of an eye, fashion changes like the seasons in weather, and it is constantly doing so. With a change in trends being seen before us, could there also be a change in the morality of the ideal runway body? As of now, many may say that the ideal runway body is ‘super skinny’ – but what kind of message is this sending to viewers?  Many young girls are vulnerable to the media’s portrayal of the fashion industry, and the industry itself.  Magazines, ads, and runway shows oftentimes show off, to some extent, “overly skinny” models, which henceforth send out the message that “stick- thin” is in.

As a result, some of these youthful consumers have turned to eating disorders such as anorexia and bulimia in an effort to mimic the ‘idealistic’ body figure.

Rather than sending out unhealthy messages that may cause adolescents to put their health at risk, Madrid fashion week executives have taken it upon themselves to exclude too-thin models from the runway.  It was implied that it is the responsibility of the fashion industry to include healthy models into their work, and thereby becoming a good influence on assailable minds.

Just imagine a line up of tall, beautiful, healthy glowing models strutting down the runway!

What a great image to portray!

Madrid fashion week’s decision is meant in no way to attack designers or agencies for their common use of the skinniest-of-the skinny models; Rather, they are simply asking for a size-up. Requests like this are not unheard of, as this is not the first time Madrid has chosen to eliminate ‘bone-skinny’ models from their fashion shows.

Madrid’s bold decision has been so influential that other cities have become inspired to follow in their footsteps!  Letizia Morattie, for example, mayor of Milan, spoke to an Italian newspaper stating that they similarly seek a ban on “too skinny”, in hopes of finding a solution for models who look unhealthy.

Enforcing a ban such as this may seem cruel at first, however it may ultimately benefit the models themselves, as they will be urged to provide for their bodies, a healthier look.  In turn, a domino effect may ensue, and spill over onto designers, agencies, buyers, and the public, who may all begin to accept and seek a healthy looking body type.

But what is considered a healthy body type?  Madrid is determining entry into its fashion shows on BMI (body mass index).  Models who fall below the minimum BMI requirement will not be permitted to walk for the city’s fashion week – and as a result, 30% of the models that walked in last years event, have been turned away.  What a significant drop!

By turning away some of the models, Madrid stands firm in its notion that the fashion industry should convey an image of beauty and health as it once did.  As a result, maintaining healthy-looking models is a high priority, as health is a chief concern, not only to the models, but to vulnerable fans as well.

Although not all may agree with the city’s decision, it is in high hopes that a common ground can be met and agreed upon where it is a win-win for everyone involved!

If a change requiring healthy models can come to common ground we will have to credit model Coco Rocha for standing out in the crowd of models, to bravely speaking out. 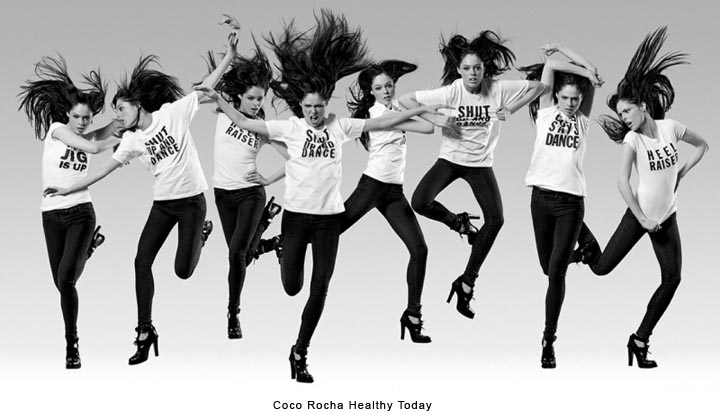